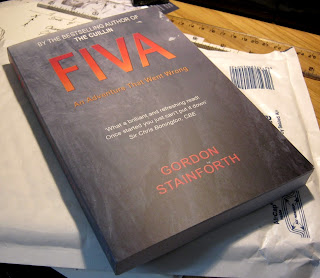 FIVA: An Adventure That Went Wrong, by Gordon Stainforth

When Gordon Stainforth asked me to read and review his
new book, I jumped at the opportunity. His true story of an adventure going
sour, and in the mountains of Norway no less, struck a chord and I couldn’t wait
to read it.

The story is a simple one: two brothers, young but obsessed
with climbing, travel to the Romsdal region of Norway to climb a massive route
on Store Trolltind. They underestimate the scale of the challenge and get
themselves into bad trouble. I think every climber can remember biting off more
than they can chew when young and gripped with ambition, so there’s plenty to
identify with here.

Gordon has chosen a very intimate first person point
of view to narrate his book. At first, until I got used to it, this point of
view jarred slightly and I found myself thinking maybe it was a bit over the
top. Gordon writes from his own perspective, albeit from 1969 when he was
nineteen, and in the first pages a lot of youthful exuberance and inexperience
comes through–not a bad thing by any means, but it did take me a few pages to
get a feel for the stream-of-consciousness style of writing.

This point
of view is very narrow. We don’t see much of the other character, John, because
we’re locked into Gordon’s head. At first this bothered me, but as the drama of
the story unfolds the sheer power of this writing style becomes very
apparent.

FIVA goes beyond mere description. Because we’re locked into
Gordon’s head, we see and experience every moment exactly as he does, and it’s
quite a ride: confidence giving way to uncertainty, frustration, the confusion
of getting lost and off-route. When disaster strikes, the mental processes are
mapped out with such amazing honesty that I found myself transported back to the
(thankfully rare) occasions when I too have been close to death in the
mountains.

It’s all the more astonishing because this tale was pieced
together forty years after the event, based on shared memories between the two
brothers (which time had of course distorted). The reality of the story is
driven home by frequent photographs taken at the time of the disaster. And the
characters grow too: the experience draws out reserves of strength and survival
skill in both of them, despite the mistakes they make that so nearly kill
them.

After finishing the book, I’m left with the profound feeling that
this is one of the best books about mountain misadventure that I’ve ever read.
There are plenty of climbing books out there that feature harder routes, or
higher mountains, even higher stakes. The beauty of FIVA is the unflinching
honesty, the authenticity, and the intimacy. In experiencing such a harrowing
experience from Gordon’s perspective, so skilfully written, we experience it for
ourselves in a way that many climbing books just can’t manage.

Despite my
initial misgivings about the unusual point of view, I have absolutely no
hesitation in recommending this as a must-read for every lover of mountain
literature. It deserves to become a classic of the genre, and based on the
wealth of other enthusiastic five-star reviews I’ve seen on the internet for the
title, I have no doubt it is destined for widespread success.

Find the book on Goodreads