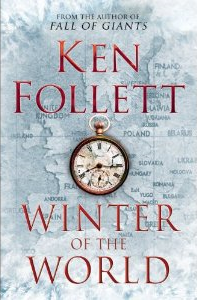 Winter of the World by Ken Follett
My rating: 4 of 5 stars

Winter of the World is the second volume in Ken Follett’s ambitious “Century Trilogy”. The first, Fall of Giants, follows several families as they navigate the dramatic upheaval of the Great War. In the spirit of War and Peace, Follett’s stories are peopled by characters on both sides of the conflict and from all political viewpoints and social classes. Follett is a master of complex plots spanning many years. His books are not easy reads but are breathtaking in scale and deeply satisfying. The first volume was one of the finest works of historical fiction I had read in a long time–surpassed only by his own classic, The Pillars of the Earth. Subsequently I had very high expectations for the second installment in the trilogy.

WOTW features many of the same characters that starred in the first volume, although the story begins many years later in the early 1930s. The first book showed Germany’s defeat and the depths to which that country sank after the war; in the 1930s it is shown how the Nazis offered hope for millions of impoverished Germans, desperate for their country to assert itself again and for prosperous times to return. Many of the characters follow the Nazis initially, only to realise later on that they promised only violence and disaster. The popular support the Nazis initially had in Britain is described very frankly.

It’s easy to look at WOTW as just a novel chronicling the Second World War, but in fact it is also a very detailed social commentary of the era. Subjects such as internationalism, and changing attitudes to class, culture and sex are treated with remarkable intelligence and skill. Other prominent themes vary widely, from espionage to Labour politics, atomic research to Soviet propaganda.

There are a couple of reasons I can’t quite bring myself to give WOTW 5*. Firstly, this story follows the same basic formula as Fall of Giants. This is not necessarily a bad thing. The formula is a very good one, and although it’s possible to see common plot elements in both books, the plots are so complex and interwoven that it really doesn’t matter; indeed, Follett has woven these threads together with such skill that any similarities between the books actually help to create a sense of resonance and continuity of history.

That said, someone who has read Fall of Giants will more or less know what to expect here. WOTW has few surprises for a reader with a reasonable grasp of mid 20th century history.

Secondly, there are just a few too many coincidences for my liking. Follett gets away with it due to the large cast of characters, but at a couple of points in the story I found myself thinking a particular plot twist was a little convenient. Several of the romance subplots also seemed rather similar.

Winter of the World brings the Second World War to life, but it’s not a war novel: the actual battle scenes are very much secondary to the more important human stories happening all around the war itself. We all know how the war ended; the uniqueness of this novel lies with the characters we got to know in Fall of Giants, and how they and their families react to this second disastrous event. Like all books, it’s character-driven, and for this reason we can excuse the occasional exposition necessary to get the historical facts across.

In terms of historical accuracy, it has been many years since I studied the 1930s and 40s but I found nothing to complain about. It all felt very authentic, and I completed the novel with a profound sense of gratitude that I did not have to live through that dark period of history. The prevailing message of the book is optimistic–or perhaps bittersweet, when the reader considers how much could have been achieved after the war, were it not for Communist expansionism and the looming menace of the Atomic Age.

Follett is a true master of his craft and I will be pre-ordering the third book in the trilogy the moment it is announced.