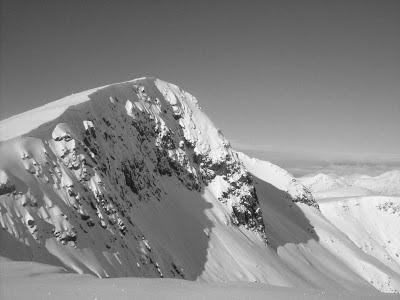 Before you share this feature on social media, please bear in mind that it refers to the events of 2013, and may not be as relevant today. Thanks for reading.

Every winter, the mountains of Scotland take lives. They kill by hypothermia, by cornice collapse, by avalanche, or by a simple slip on a steep slope. The tiniest mistake can escalate into a disaster. These mountains have killed every year since mountaineering began as a sport, and they will continue to do so for as long as we go into the wild places to seek the silence and the light.

Usually when the press report on a tragedy the vultures will come out of the woodwork and utter the usual ignorant phrases such as “wasting taxpayers’ money”, “putting the lives of rescuers at risk”, and “why were they climbing in such dangerous conditions?” The self-righteous will spout their venom from the safety of their armchairs for a few days, and then all will fall silent.

But this year something is different. This year I believe the tide of public opinion is starting to turn against winter mountaineers.

A chain of tragic coincidence has resulted in what the press is calling a ‘spate’ of deadly accidents. In late January, four mountaineers were tragically killed on Bidean nam Bian, the highest peak of Glencoe. They were experienced climbers and although people tried to pin blame on them, nobody succeeded in doing so. The rescuers were universally praised for their amazing work. Two climbers were avalanched that same weekend in Coire an Lochain, and only days after there was another fatal accident on Tower Ridge. The whispers started to circulate. Climbers expressed their sympathy for the dead but did not judge; we who know the truth realise, unlike the ignorant who snipe and look for someone to blame, that mountains wield awesome forces which strike the experienced and inexperienced alike.

Now, today, another avalanche has killed two more mountaineers at the Chalamain Gap on the way into the heart of the Cairngorms. Another survivor is critically injured. This is a terrible event, but it would be a mistake to think this somehow constitutes a ‘spate’ of grisly occurrences, or that something, somewhere, is out of control.

There have also been some very suspect statistics doing the rounds. For the truth, please read this excellent assessment of the facts.

Laymen who do not understand the avalanche forecasting system looked at the forecast, saw that it said “Considerable”, and immediately pointed the finger of blame–without realising that a “Considerable” forecast constitutes relatively average conditions. There is almost always an avalanche hazard somewhere in the mountains in the winter. The trick is figuring out which slopes will be safe and planning your day accordingly. It’s all about information and experience, two very important things when it comes to winter mountaineering.


“Something must be done.”


This phrase was used on the Newsnight Scotland recently when a very poorly chosen commentator decided to give a voice to these grumblings. It was suggested, on air, that access to the mountains needs to be restricted  in bad weather or during high avalanche risk. The mountain rescuers are painted as victims who are being put at risk by the reckless antics of foolish mountaineers. The reality, as anyone who has knowledge of these matters knows, is that the rescuers are brave volunteers who do what they do because they want to save lives. They don’t begrudge being called out to help people. They might offer words of advice if they think advice is needed, but they certainly don’t put their own safety above those of the people they go through hell to save.

The media is working its insidious witchcraft, trying to prove trends where none exist, subtly suggesting that blame needs to be apportioned. The victims are being painted as reckless villains, and by extension all winter mountaineers.

There is no situation spiralling out of control. Climbers use their knowledge and experience to plan their routes, and while it’s true that inexperienced teams can get themselves into trouble through ignorance, avalanches can strike anyone (I should know; I was avalanched in 2009). This so-called ‘spate’ of accidents is not symptomatic of some deeper malaise that needs to be cured.

What needs to be done is a continuation of the good work currently in progress: education about mountain hazards. Although there is a wealth of information out there for the modern mountaineer, it still needs to be properly utilised, and that needs experience and judgement. The MCofS and BMC, along with the Scottish Avalanche Information Service, provide valuable information that can help climbers make wise decisions on the hill.

When accidents happen to the inexperienced, instead of tearing them to pieces in the press and on the Web, I think it’s time to show a little more compassion. Mountaineers need more education, but the public do also. Perhaps if more people understood why we choose to do this activity the public would be less vicious in their ignorant condemnation. We need to remember that this is not about recklessly heading out into the wild and putting others at risk: it’s about personal challenge and a quest for freedom, one that unfortunately will always involve an element of risk. Let’s also not forget that mountaineering is about fitness and keeping active–something the government claims to promote.

Mountaineering does not need to be regulated, but there will be a debate about this. We need to make sure the wonderful freedom of the hills we value so much is not crushed by the bitter voices of the ignorant few.

Click here to read the Mountaineering Council of Scotland’s response to the controversial comments on Newsnight Scotland recently.

Tune in to the next episode of BBC Out of Doors to hear some intelligent debate and comment on the subject.

Outdoors Magic has put together a summary of reactions from the climbing community (including this article): Debunking the Mountain Safety Myths.

My brother James Roddie, well-known outdoor blogger, offers his opinion: The Thin End of the Wedge?