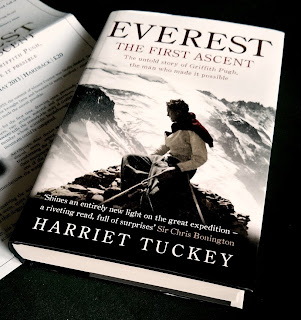 Everest – The First Ascent:
The untold story of Griffith Pugh, the man who made it possible
by Harriet Tuckey
In my opinion this is the most important book on the history of mountaineering to have been published for many years. Hopefully this review will demonstrate why I think this is absolutely essential reading for anyone with an interest in high altitude climbing.
Everyone thinks they know the Everest story. On May the 29th, 1953, Sir Edmund Hillary and Sherpa Tenzing Norgay reached the summit after a valiant battle against nature. The success of Everest was presented to the world as a triumph of human resilience and bravery against natural forces, but the role of science and technology was played down in favour of good old fashion heroism. At the time–this was 1953 and coronation week, after all–this is what the public wanted to hear and it became a classic tale and a subject of considerable British pride. Numerous books have been written on the expedition and what we think to be the truth has become part of accepted history.
However, this book paints an altogether different story–one of suppressed achievements and devious politics.
Background
Griffith Pugh was a physiologist and a member of the 1953 Everest expedition. This book, researched and written by his daughter Harriet, documents the remarkable contribution he made to the success of the expedition. At first I thought “the man who made it possible” was merely a punchy tagline, but as I read I came to see that it is no way an exaggeration. Pugh’s work quite literally made the expedition succeed, and I have no doubt that without his contributions it would have failed catastrophically just like every other failed Everest expedition which depended on pluck and human daring instead of methodical scientific research.
The author is very critical of earlier Everest expeditions, many of which resulted in unnecessary loss of life or ended in farce, usually due to unscientific methods or a romantic, old-fashioned approach. The early part of the book takes a candid look at Everest politics and demonstrates how the British deliberately prevented other nations from reaching the summit before they could do it first themselves. I found Harriet Tuckey’s objective, clinical style of analysis quite refreshing when compared to other mountaineering books which often fail to look at the bigger picture and focus on the climbing above all else.
Pugh’s contributions
So just what did Pugh contribute? His pioneering experiments into human physiology revolutionised understanding of how the body copes with oxygen deprivation at altitude. He drew up the acclimatisation regime used by the climbers and also invented numerous items of specialist equipment, including the boots, tents, down clothing, stoves, and many other items. He was also responsible for the iron rule that all climbers at altitude must drink constantly to battle dehydration–thought to have been one of the main reasons that previous attempts to reach the summit failed.
The fact is that, despite what we have been led to believe, the ascent of Everest was a triumph of science and technology first and foremost. By 1953 the romantic era of mountaineering had come to an end. This was a new age, but many of the leading figures of the time fought it bitterly and for many years succeeded in keeping Pugh’s contributions hidden.
Why was his work overlooked? The reasons are complex (you’ll have to read the book to gain a full understanding!) but Griffith Pugh’s abrasive and cantankerous personality seems to have been the main factor. This book is a detailed and compelling character study, building up an impression of a man who has a family yet frequently resents the demands they place on his life, who is insensitive and rude to others out of habit, who is careless with money, and who frequently sabotages his own career. Some people absolutely hated him and his relationship with Edmund Hillary was certainly rocky. Hillary is shown to take his place on the long list of people who failed to give full credit to Pugh, both for the 1953 expedition and other achievements later on.
Griffith Pugh is certainly not portrayed as a likeable man or a sympathetic character, but as I read the book I developed an admiration both for him and for the difficult personal journey of his daughter in researching these events and chronicling her father’s life. This is a deeply touching story of an unhappy family trying to make things work despite the demands placed upon it by the central character.
Everest – The First Ascent is quite simply a compelling book and provides vital insights into the 20th century history of Himalayan mountaineering. It certainly transformed my view of the Everest challenge and the way it was approached and finally solved. In my opinion this should be mandatory reading for all scholars of mountaineering history, but there’s so much more to this book which I haven’t had time to put in this review for fear of making it long winded!
Everest – The First Ascent is available in both Kindle and hardback formats for £10.21 and £11.34 respectively.