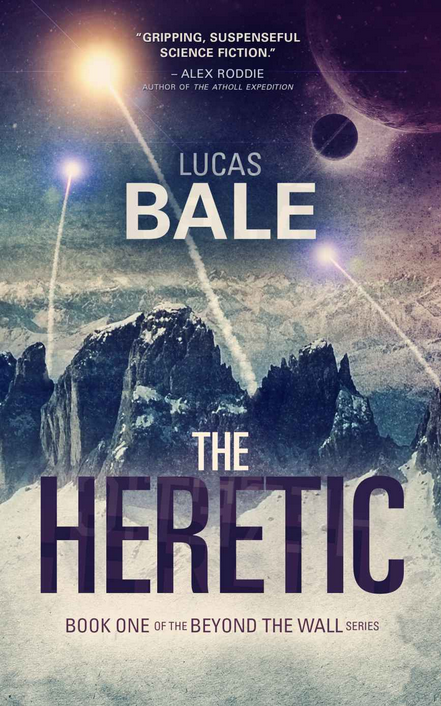 The Heretic
(Book One of the Beyond the Wall series)
by Lucas Bale
This blog tends to have a fairly narrow focus — mountains, 19th century history, books about those subjects, and my own writing — but on special occasions I break the trend and write about something different. This is one of those occasions, and today I’d like to take the opportunity to review the debut novel of an up-and-coming science fiction author, Lucas Bale.

As a child, I was obsessed by science fiction. I devoured the works of Isaac Asimov, Aldous Huxley, Douglas Adams, and many other writers. I think what really attracted me to the genre was the sheer variety and originality of the stories: a kaleidoscope of worlds and characters. In recent years, however, mainstream science fiction seems to have become bogged down in a homogenised Hollywood of trite, predictable plots, packaged in bitesize chunks for the mass market.

I’m happy to report that this book is nothing of the kind.

The Heretic is the first novel in Bale’s Beyond the Wall series. The author paints an uncomfortable and frequently bleak vision of a future in which humanity has spread beyond the ruins of an Earth destroyed by climate change and conflict. This is not an original idea, of course, but few ideas are original these days and what counts is how you deal with the idea.
Like all good science fiction, The Heretic focuses on the characters. Bale has chosen to depict only a few characters in his book, but they are masterfully drawn and succeed in paying homage to classic science fiction like Firefly and Star Wars while retaining a distinctive individuality of their own. The freighter captain Shepherd is especially memorable, and his vessel Soteria is very much a character in her own right with numerous surprises up her sleeve.
The Heretic is fast-paced, mysterious, frequently brutal, and like most of the best science fiction poses more questions than it answers. It’s all too easy to slap the label “post-apocalyptic” on things these days but I think this book is bigger than that. I have a hunch that we have only been shown a glimpse through the door in this first volume of the series, but the world beyond it is big, frightening, and surprising. At its core is the grand mystery of exactly what happened to Earth and why humanity is now spread so thin.

Lucas Bale’s debut novel is gripping, suspenseful science fiction. It seizes you right from the first word, and the chase scene at the climax of the story is some of the finest writing I’ve seen in the genre — genuinely edge-of-seat stuff.

I look forward to future books in the series, and I suspect this new author will go far!
You can download The Heretic on Kindle from Amazon UK for 99p, or visit the author’s website for other links.