Weather in the glen:
Wind and rain. Gusting to galeforce, persistent light rain, although the cloud base is fairly high. Mild temperatures.

Today Rach and I climbed B-F Buttress Route on the West Face of Aonach Dubh, a scramble weaving its way up and along complex Grade 3 terrain. It was a very traditional adventure, with climbing varying between steep heather, moss, choss, mud and the occasional rib of good rock! At least half of the climbing was in dank and unfrequented gullies. It’s one of those scrambles/easy climbs that is so rarely climbed that the native lush vegetation is still in virgin condition.

The route was fantastic, with several exposed and exciting situations and a crux section involving an exposed traverse of a sharp pinnacle. This was the only section we needed the rope for (and a couple of slings): I belayed Rach across it, then abseiled the pinnacle into the gap myself.

We topped out into a howling gale and struggled up to Stob Coire nan Lochan, as one cannot have a day of scrambling without a summit. =) We decided not to descend via Bidean and Stob Coire nam Beith as the wind was threatening to blow us off the ridge, so ended up going down Coire nan Lochan instead.

All in all a fantastic day, finishing with fine food in the lodge, and ale and whisky in the bar. =)

(I’m not doing any walking or climbing tomorrow as the forecast is abysmal. Might go to the Ice Factor instead!) 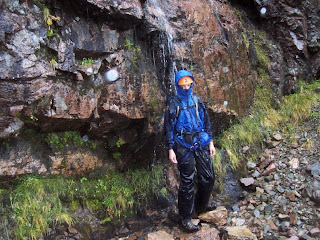 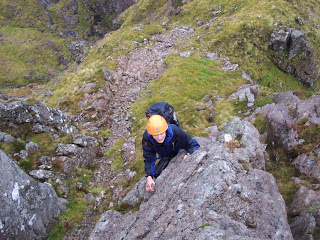 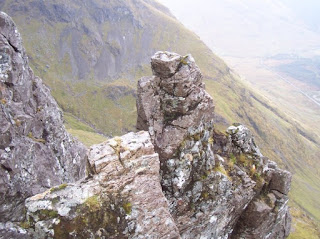