I’m on holiday at the moment in Glencoe, staying at the Clachaig. As always, returning is a strange experience; it’s been over a year since my last visit, and for various reasons it no longer feels like home (although it will always be a second home). I suppose revisiting a past life is always an interesting experience because, frequently, it’s not the place that has changed but rather ourselves.

On this occasion I find that the “lonely inn” has in fact changed a little, thanks to the extensive programme of renovation since my last visit. Some faces are new–such is the nature of the business–but it’s nice to see many familiar faces as well, including my brother James and his partner Nicole.

The weather forecast is pretty bad all week so I decided to make the most of my first day and go for an adventure on the cliffs of Aonach Dubh. My association with this mountain goes back to 2008, when Rachael Murphy and I climbed the B-F Buttress Route in torrential rain. Since then I conducted an extensive campaign of exploration on the West Face, discovering several new routes and culminating in the first ascent of Shrike Ridge, a superb arete graded Difficult.

Today, with such diabolical weather, I would not be climbing anything as hard or exposed. I selected an easy scramble, the Rhyolite Romp, which explores the terrace systems of the mountain’s North Face.

I expected to be sheltered from the rain, but in fact the undercut rock architecture of the Middle Tier produced endless waterfalls that cascaded over the narrow gangway. I got utterly drenched–far more so than I would have done through the rain alone! There was very little scrambling on the first part of the route. Mostly exposed walking, but nevertheless I was glad to have a stick for balance. I’ve discovered that something pointy (an ice axe, or stick with a steel spike at least) is recommended for many of the more overgrown routes on Aonach Dubh.

The terrace took me into the huge amphitheatre beneath Ossian’s Cave. This is the biggest cave in the glen, formed by a collapse at some point long ago. The floor of the cave is actually slanted at around 45 degrees and therefore it isn’t a very satisfactory cave, but it’s been an objective for climbers for a very long time; in fact, the very first recorded rock climb in Glencoe was Ossian’s Ladder, the vegetated climb leading up into the cave.

My task at this point was to navigate to the next terrace, further up the cliff: the Rake. I discovered an overgrown arete of rock at an easy angle. Although the actual climbing was very easy, I’d estimate that at least half of the route was on steep slime, mud, moss and heather. 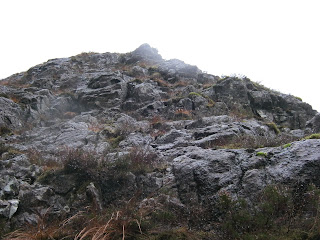 After this struggle, the traverse of the Rake was comparatively easy and I reached the summit of Aonach Dubh in good time. I could see streaks of snow valiantly resisting the thaw in Coire nan Lochan. Let’s hope it gets a bit colder over the next few days! 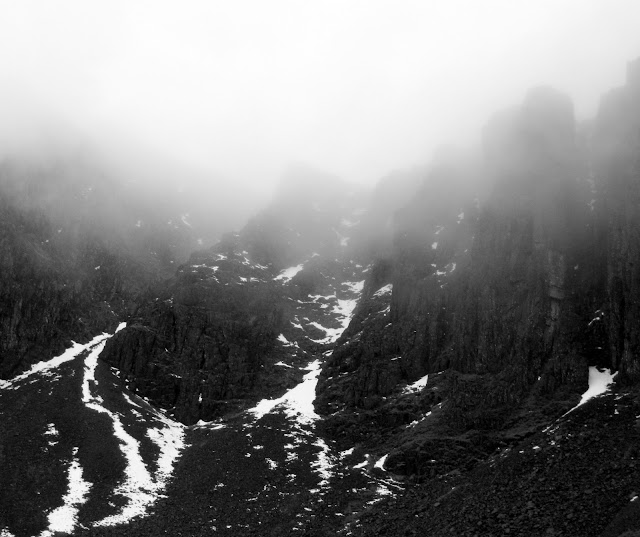