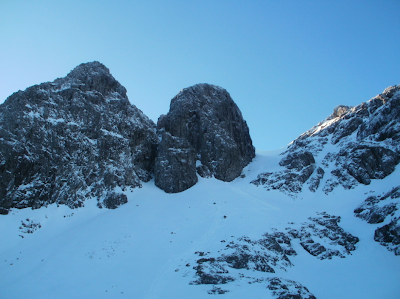 This article was first published on Glencoe Mountaineer on the 1st of March, 2011. It details the culmination of my experiments in Victorian mountaineering equipment in a Scottish winter climbing context.

Bidean nam Bian is the most local mountain to the Clachaig, and it also happens to be one of the finest peaks in Scotland. I have visited it many times over the past four years; although I’ve lost count, I estimate I have stood on the summit almost fifty times. There are many routes to the top, all of them stunning, and I had climbed all of them I was capable of doing … except one.

Directly left of the grand couloir, Great Gully, the northern cliffs of Bidean are divided into two halves by a savage fault-line. This gully is known simply as Central Gully, and passes through magnificent scenery between Diamond Buttress and the Church Door. On several occasions now I have attempted it, but every time the entry pitch has turned me back, either due to poor conditions or an insufficient build up of snow and ice.

This time things were different. Once again using the Victorian climbing gear, I swiftly walked up to the basin beneath the north face. A line of steps climbed the snowfield to the base of Collie’s Pinnacle, and I progressed rapidly up this slope, only occasionally expanding a step with a stroke of the axe. At the base of the Pinnacle, a broad patch of snow, stomped flat by the boots of climbers belaying at the foot of the gully, allowed me to stop and eat my lunch.

Up into the gully! I decided to take the Lower Right Fork, which is the easiest entrance. This narrow groove between Collie’s Pinnacle and the Church Door contained a short pitch of extremely dense water ice. In crampons such a step would be no obstacle at all, but that was not the point of yesterday’s climb: I wanted to really earn my ascent, make the climb with skill and physical effort.

I set to work cutting steps, wielding the axe with full-weight swings from the shoulder, striking with the point of the pick, carving great chunks of ice from the slope. This was the first time I have really had to pay attention to proper technique while step-cutting, and the extensive study from Victorian mountaineering texts has paid off. Cutting steps in this kind of ice with a modern axe and zero knowledge would be very difficult indeed. 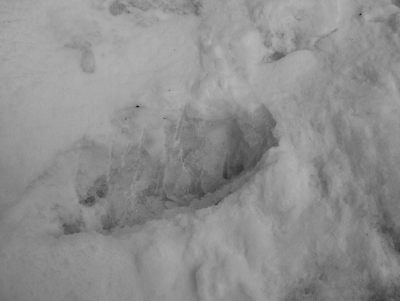 Fashioning a step in water ice

My experience of using the traditional equipment so far this winter stood me in good stead, and I hugely enjoyed dispatching that first pitch. Once in the gully proper, the wonderful rock architecture all around me inspired awe and wonder: it was like the interior of some grand cathedral, enormous overhanging walls riven by cracks and tunnels, dripping with icicles–a vast secret place inside the mountain I had often imagined but never before ventured into. To the right, legendary climbs resonant with history revealed themselves to me for the first time. I emerged at a narrow arete of snow, the neck of Collie’s Pinnacle, and I imagined my hero balancing on that airy spire, gazing into the soft springtime haze in the valley below. 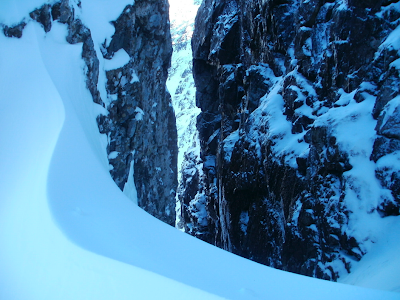 Looking down the Lower Left Branch

For the very first time, I began to feel that I had succeeded in shaking off the constrictions and clutter of modern climbing culture. Only from a perspective slightly outside the circle can one truly appreciate the extent to which mountaineering has become shackled and chained, robbed of its free spirit and the joyous innocence that characterised those early years of exploration and discovery. That modern techniques are safer and faster there can be no doubt; but as someone who has experienced both worlds, I would never give up the profound satisfaction and freedom I have found by putting away my crampons and learning the older craft. Every ascent feels so much more earned, more valuable; and although I climb at lower grades the enjoyment is magnified a thousand fold. 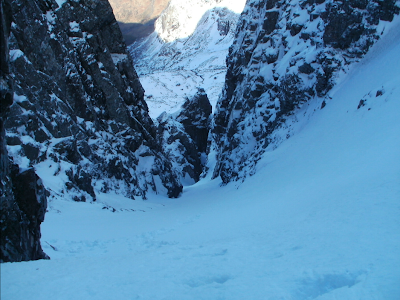 Collie’s Pinnacle framed by the gully

After my moment of revelation, I set to work climbing the long easy central section of the gully. A snow slope at high angle rose above me for some hundreds of feet, steadily getting steeper but with no obvious difficulties. A line of steps allowed me to dispense with step cutting some of the time, although more often than not the old steps had refilled with new snow and frozen again, so I ended up doing a lot of cutting regardless. Sometimes drifts of powder covered the neve, but mostly the snow was a joy to cut and conditions were very favourable. 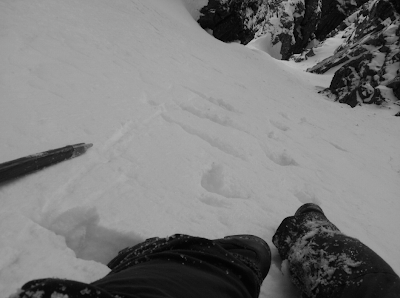 I reached another fork in the gully. To the right, a pitch of steepish ice seemed to offer an exit, but left looked easier so I took that fork. One last pitch of easy-angled ice, and then a romp to the top–or so I thought!

I took my time cutting steps in an exposed position on the final ice step. Now onto what I believed was the easy snow, only to discover that a thin layer of powder coated a slope of 45 degree water ice that continued for another two hundred feet to the exit! It took me an hour to climb this slope, cutting every step from the shoulder with the pick, and by the time I finally reached the shoulder of the North Ridge I felt a full-body tiredness–but such a sense of satisfaction. 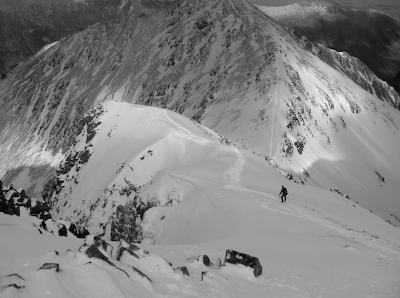 Final few yards to the summit

Bidean’s familiar summit rewarded me with its gorgeous views, and I chatted with several other mountaineers who expressed admiration and surprise at the equipment I had used to climb the gully. One gentleman even remarked that the boots I was wearing closely resembled the ones he had learned to climb with, fifty years ago. After a brief pause at the summit I ran down the West Ridge, and only narrowly missed being late for my shift behind the bar! 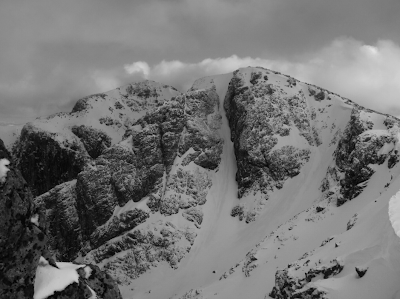 Looking back at the mountain, from the West Ridge

Note November 2012. At the time this climb didn’t seem like a big deal, but looking back this was actually quite important because it was the final climb I made with the Victorian mountaineering equipment–and arguably the most challenging. Although I climbed the Grade II North Face of Stob Coire Sgreamhach way back in February 2009 using an antique ice axe and with no crampons, on that occasion things felt easier due to soft snow, meaning I had to cut very few steps. Central Gully was different: a real test of strength, endurance, and step cutting ability. Needless to say, the lessons learned while battling the ice pitches on Bidean made their way into the pages of my book.