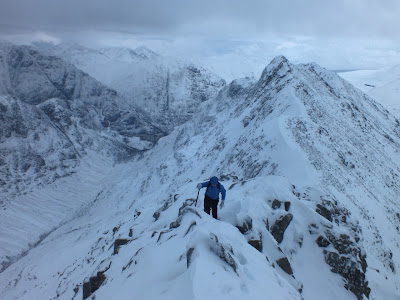 The Bidean massif is a complex mountain range. It’s a rugged landscape of secret valleys, soaring aretes, savage cliffs, hidden peaks. Since 2008 I have journeyed into this range on dozens of occasions and climbed most of the easier routes, even adding a couple of new ones to the repertoire. However, I never got round to doing the Beinn Fhada ridge.

The main peak of Bidean throws three ridges down into the depths of Glencoe: Aonach Dubh, Gearr Aonach, and Beinn Fhada. All three require cunning tactics to approach direct from the glen; the easy walking routes are circuitous and indirect, and the scrambling approaches are devious. Beinn Fhada has perhaps the least obvious approach out of the three. The easiest route avoids crags on the left, zigzagging between enormous floes of ice to finally reach the ridge perched high above the famous Lost Valley.

James and I set out yesterday morning to climb this ridge. Snow blanketed the land from glen level, and after fording the partially frozen river in the Lairig Eilde we began the grind up to the top. The snow was knee deep in places and James blazed the trail (he’s an order of magnitude fitter than I will ever be, as followers of Glencoe Mountaineer will be well aware!) We found some delightful ice to play on quite low down and it felt good to be teetering on front points for the first time in ages.

Atmospheric rime coated the rocks from a low level, and had formed the most astounding, delicate feathers of ice. 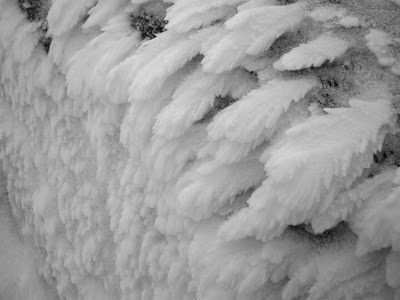 James had passed this way before and guided us efficiently to the ridge crest. The winds picked up at this point–nothing too excessive, but the cold was biting. Unfamiliar views of familiar mountains opened up on both sides. Seeing a well-loved peak from a different angle reinforces the truth that one can never completely know a landscape; there is always something new to discover, some new secret to learn.
We began the march along the crest of Beinn Fhada: a knobbly spine gripped between the deep-cut glens of Lairig Eilde and the Lost Valley.
As we climbed, the views became grander, the terrain sharper and more challenging. Each peaklet on the ridge was taller and more precipitous than the last. We encountered no technical difficulties–yet–but it was a superb ridge walk of similar character to the Grey Corries or the Mamores.
Finally, after a particularly narrow and exposed snow ridge, we encountered a section of the route that often confounds and defeats climbing teams: the infamous ‘Bad Step’
It’s a vertical buttress some thirty or forty metres high (at least) and looks quite impossible at Grade II. However, James knew the easy way up. A ramp of slow slants left, at the end of which it is possible to climb snowy ledges and corners: a devious way and one easy to miss! A direct assault on the Bad Step would be a brutal struggle far more difficult than anything else on the route.
The Bad Step, when climbed the correct way, is an enjoyable bit of mixed scrambling comparable to the less exposed sections on the Aonach Eagach.
We passed a loop of rope, frozen in place on a spike of rock: evidence of an abseil retreat or descent, and a sign that if you don’t find the correct way, even easy routes like this can escalate into far more serious outings. Fortunately we had no need to resort to the use of a rope.
A final climb over rocks and variable snow led to the frozen summit of Stob Coire Sgreamhach, a pinnacle jutting just above the level of the clouds, swirling in biting winds. My water bottle had long been frozen solid by this point, and given the low temperatures I decided to put on my warm belay jacket–something I very rarely do on the hill, as I tend to run hot. As it happened the winds got stronger during the descent so I kept it on all the way back to the car.
Our descent route took us through the lonely wilds of the Lairig Eilde, a barren glen scooped out by a glacier in aeons past, now inhabited only by herds of red deer. We passed a ravine which sported some incredibly large cornices for a location at such low altitude.

We got back to the car just as darkness was falling. James, of course, seemed as fresh as he had been at 8am that morning but I was certainly feeling the effect of long miles through deep snow! I’ve only climbed a few mountains this winter, and have not been cycling to work since the autumn, so my fitness is not quite what it was. However, it’s satisfying to know that I am still fit enough to cope with big winter hill days–a demanding pastime that requires a higher than average level of fitness.

My holiday in Glencoe now draws to a close, but I have been very lucky to experience two memorable mountain days with decent weather and good company. I am due to return in a little over a month when I will be hosting the launch of my novel, The Only Genuine Jones, in paperback form. It would be great to meet some of my readers at the Clachaig on the 27th of February.