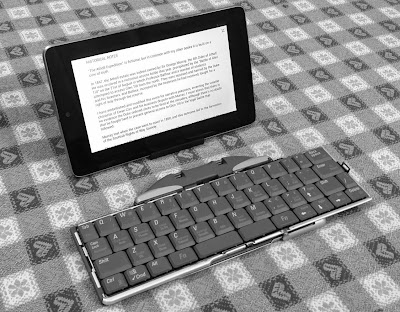 In the first blog post in this series, I discussed some of the key apps I use on my Android devices to help make my job easier. I looked at Evernote, Google Drive, and Draft. These are no-nonsense, practical tools for creating content and storing information, and I commend them to every Android-equipped writer. However, I’ve found that in the months since writing the blog post, my habits have changed. I’ve come to rely more on Dropbox and Draft and less on Google Drive and Evernote.
In this post I will be taking a look at some of the other apps I use on a daily basis as a writer, this time focusing on the peripheral tasks essential to an author’s daily work. The apps I have chosen to write about today are Dropbox, Afterword, Play Books, and Pocket.
~ DROPBOX ~
(Dropbox, Inc. / Free)

In my first post on this subject I wrote back in August, I mentioned that non-text information invariably got stored in Google Drive. At that time I only used Dropbox for storing text, but since then have I decided to simplify my setup and now put everything in Dropbox.
This is the original, ubiquitous cloud storage platform. It allows you to store files remotely and access them from anything that can connect to the Web. It runs on every modern computer imaginable, from desktop PCs to the exotic convertible machines currently available. I’ve even managed to jerry-rig access to my Dropbox account from my 1993-vintage Mac. In short, this is an indispensable tool.
A free account gives you 2GB to be getting on with, which is ample for most users. It’s possible to blag free upgrades by recommending the service to friends etc, and I was given 50GB of free storage when I obtained a Samsung device.
The Android interface is simple and uncluttered. It allows you to “favourite” items, which means downloading them to the device to allow offline access (by default, you need a Web connection to access files). Plain text can be edited natively.

Dropbox’s real power comes from its ability to interface with a wide range of other apps. For example, it provides storage space for the Draft text editor (the software I use for writing a lot of my first draft material). The “Share” feature is also very useful and allows data from almost any app to be dumped into Dropbox: 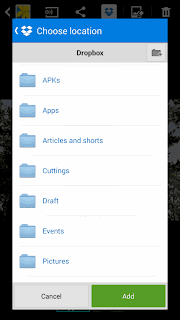 If you use multiple devices for writing and don’t yet have a Dropbox account, you’re missing out!
~ AFTERWORD ~
(Rheocode / Free)

Tracking Kindle sales from an Android device is annoying. Amazon’s KDP web dashboard is clunky and not very mobile friendly. Fortunately, the Afterword app provides an easy way to check sales on the go.
I only discovered this app recently, but now I use it several times a day. It really is much easier to use than the KDP web dashboard, and although it currently doesn’t offer information such as sales rank or graphs, the developer assures me that these features will be added at a later date. I would also like to see a full suite of widgets.

Amazon’s Kindle rules the roost when it comes to ereaders, and with good reason, but Google also provides a very serviceable platform that excels in one important aspect: it contains an absolutely vast library of obscure–and often out of print–historical books. For the researcher, this is a precious resource. I have instant access to tomes I would never have had a hope of finding in the physical world, and to sweeten the deal even further these books are provided as scanned images–complete with margin notes, signatures, and any other marks that might be on the page.
I’ve found some wonderful books on Google Play, including vital sources such as The Art of Deer Stalking (1839) and The Story of Mont Blanc (1853).
The only disadvantage is that old books tend to be set in a condensed, “black” type that is difficult to read on small screens. This is a small price to pay for the ability to see these books as they were originally printed, however.
~ POCKET ~
(Read It Later / Free)

Pocket used to be called Read It Later, and (alongside Instapaper) is one of the original “offline readers” designed for web content. Its modern incarnation is fast, slick, and a highly practical tool for the author who needs to conduct research online.
The basic idea is that if you find an article on the Web you don’t have time to read right now, or simply want to save for later use (even when offline), you press the “pocket” button on your browser (or “Share to Pocket” on your Android) and the article will be waiting for you in the app when you need it.

So there you have it: a few more apps I use on a regular basis to get my work as an author done. What are your favourite Android apps for writing?