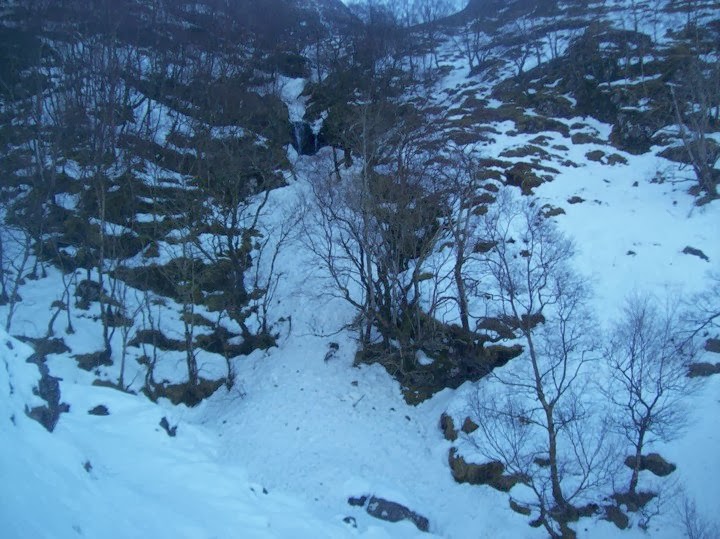 
What does the word mean to you? Before I moved to Glencoe in the autumn of 2008, avalanches were not something I spared more than passing thought for. Like other aspirant mountaineers I studied “avalanche awareness,” but had not had many opportunities to practice my fledgling skills and had no idea what an avalanche might be like in real life.

Avalanches are not remote or intangible. They aren’t things that happen only to other people. No; as I was to discover during my time in Glencoe, avalanches are here and now – catastrophic, explosive forces of nature that stalk the mountains, sometimes dormant but never entirely out of mind.

“Checking SAIS” is a ritual all mountaineers perform before venturing into the hills. If there’s too much red on the charts perhaps you will change your plans, or perhaps you’ll shrug your shoulders, assume you’ll be lucky, and head out anyway. “Besides, it’s only Scotland” – I have heard those words in the Boots Bar at the Clachaig before.

These hills may not be the Alps, but devastating, gigantic avalanches can and will occur. As Exhibit A I give you the recent avalanche in Coire na Tulaich, Glencoe, as recorded by the Scottish Avalanche Information Service yesterday.

I’d like to share a few anecdotes from my time in Glencoe to illustrate how personal avalanches can become.

A close escape on Aonach Dubh 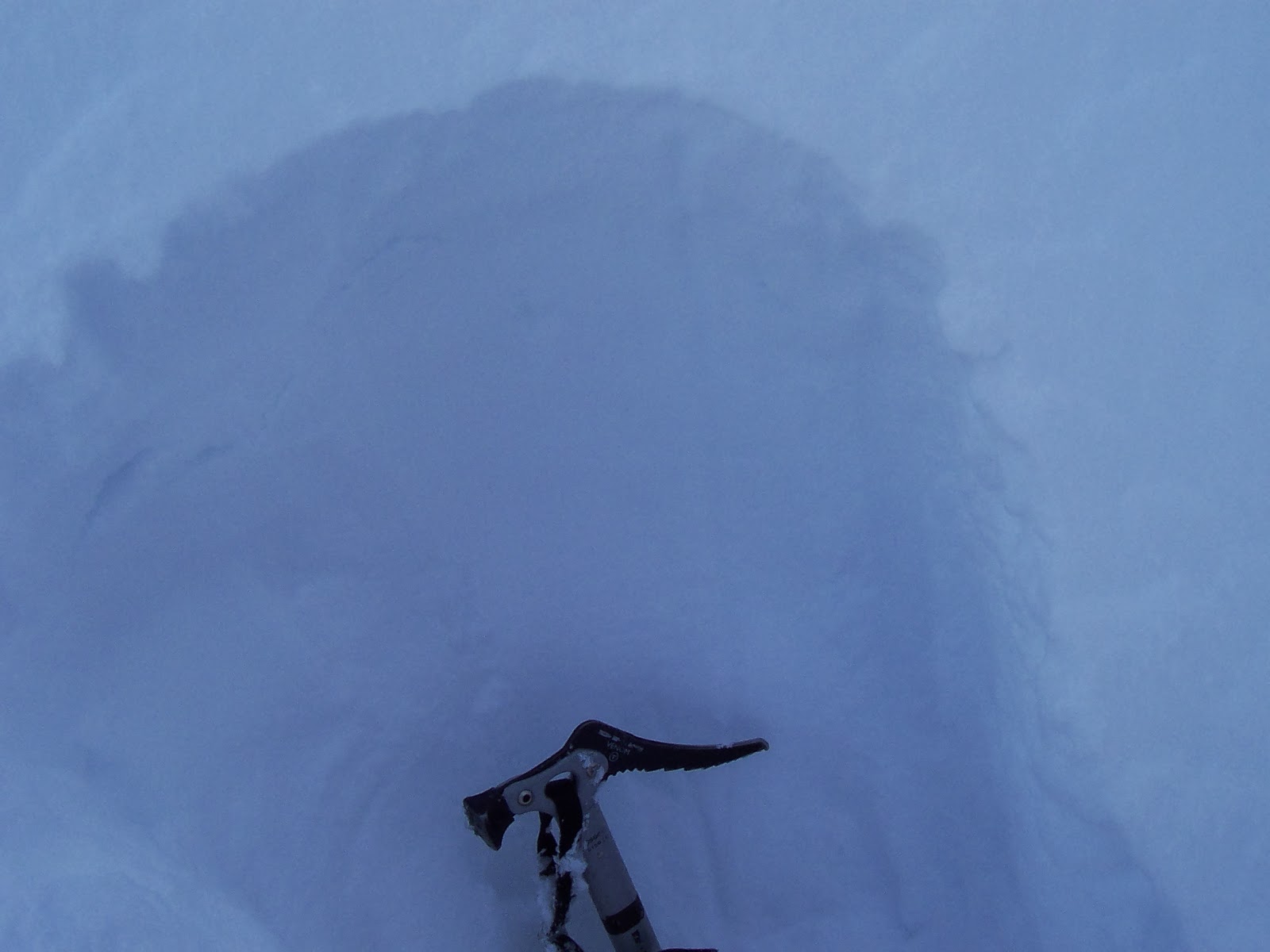 I’d dug a test pit. I thought I was safe.

My climb that day took me up B Buttress on the West Face of Aonach Dubh. The state of the snow on the broad lower front of the buttress had given me the shivers a few times as I climbed higher, but considering the fact that I was on a ridge between two gullies I didn’t consider myself to be at risk. I soon discovered that was a naive point of view. 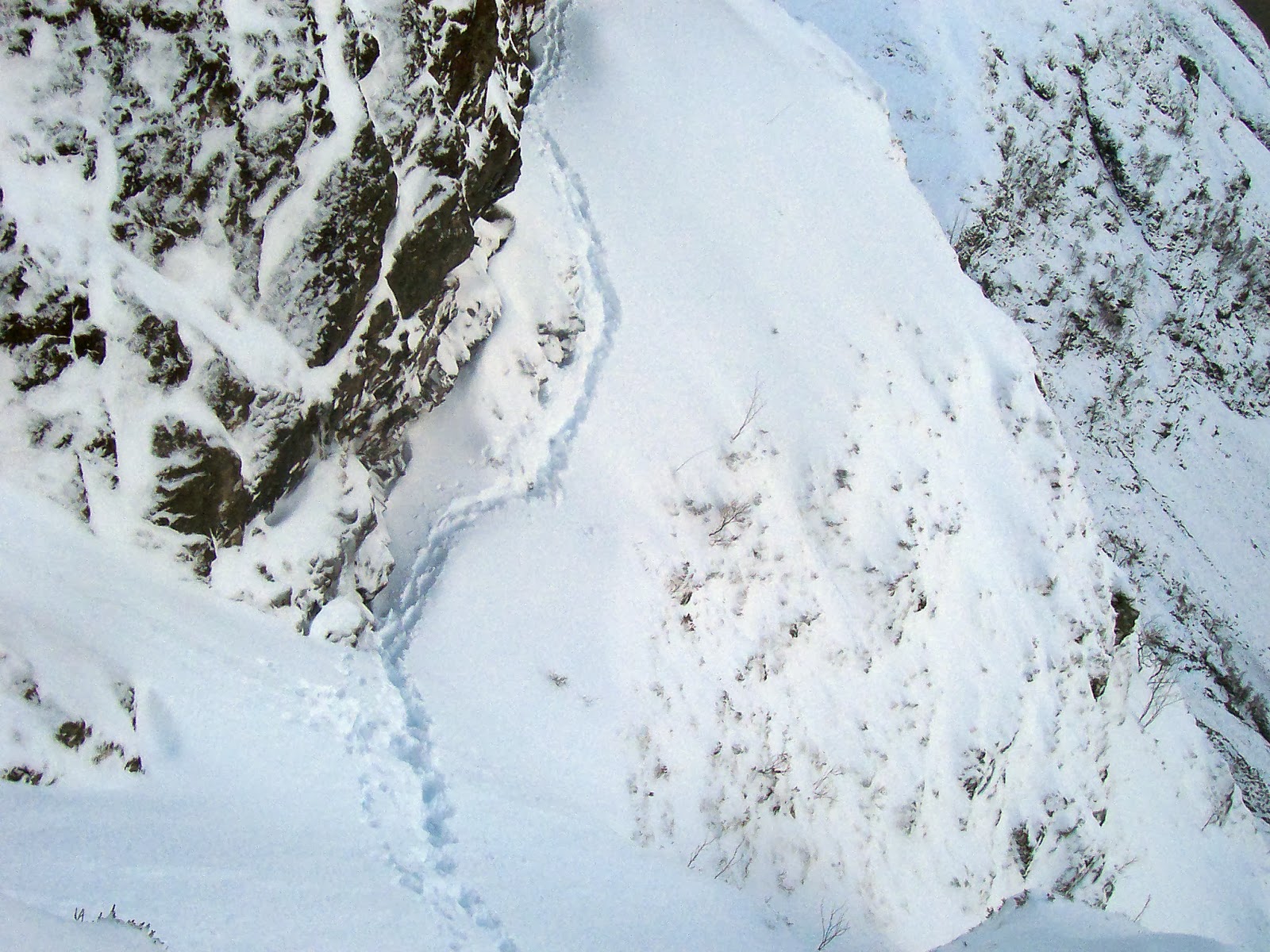 Deep, unconsolidated snow on the Middle Ledge forced me to turn back, and as I retraced my steps down the front of the buttress I was swept off my feet by a small avalanche that sent me tumbling about 40-50 feet down the slope. Fortunately the only damage was a lost mobile phone.

To this day I can’t quite account for the origin of the slide, as the front of the lower buttress was generally broken heathery ground without much accumulated snow. The only explanation that makes sense to me is that I was hit by a slide that came out of one of the gullies and crested the top of the buttress. Either way, it left me shaken and I made haste back down to the road.

A Minute’s Silence in the Boots Bar 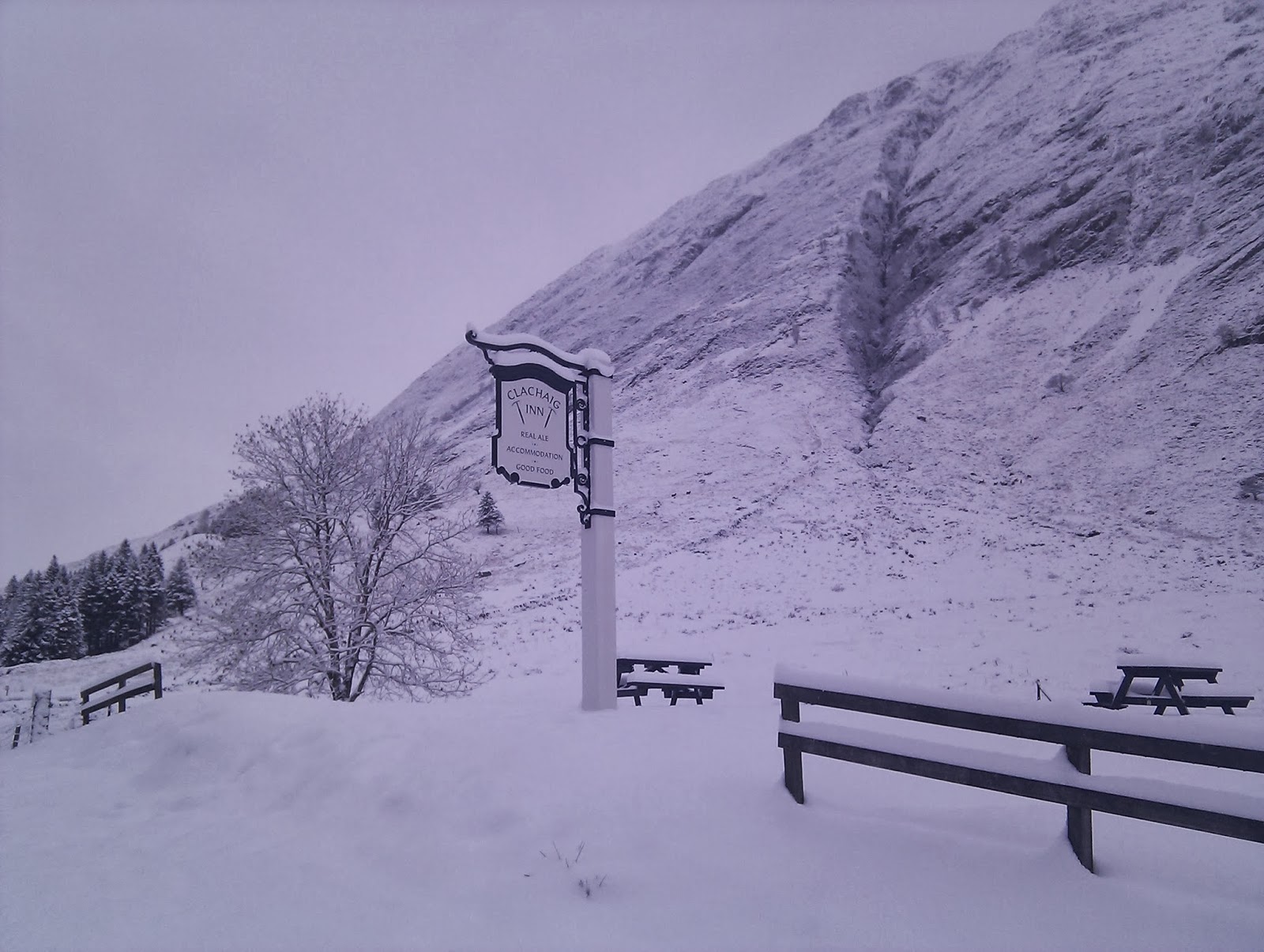 Heavy snowfall swamped the mountains of Glencoe. The snowgates were down; the forecast was bad and getting worse; SAIS said the slopes were loaded and liable to avalanche. Most climbers in Glencoe that day were safely in the haven of the Clachaig, warming themselves by the log fire and sharing a glass or three of ale with their companions.

I was pulling pints that night and I remember the moment when the bar phone rang. Jack, the bar manager, took the call. He looked shocked as he hung up the phone and walked into the Boots Bar.

“I’m afraid I’ve just been told that four climbers have been killed on Buachaille Etive Mor in an avalanche. Would you all join me in a minute’s silence in honour of this tragic loss.”

Nobody broke the silence. Every single person in that room was either a mountaineer or someone who was close to a mountaineer. Suddenly the true horror of such an event was brought into focus, and I will never forget the looks of shock and dismay on the faces of the guests that evening. It was one of the worst avalanche-related disasters in living memory – for Glencoe, at least – although tragically it would not be the last; several other people have died on Buachaille Etive Mor since that date.


The Great Avalanche of March 2010 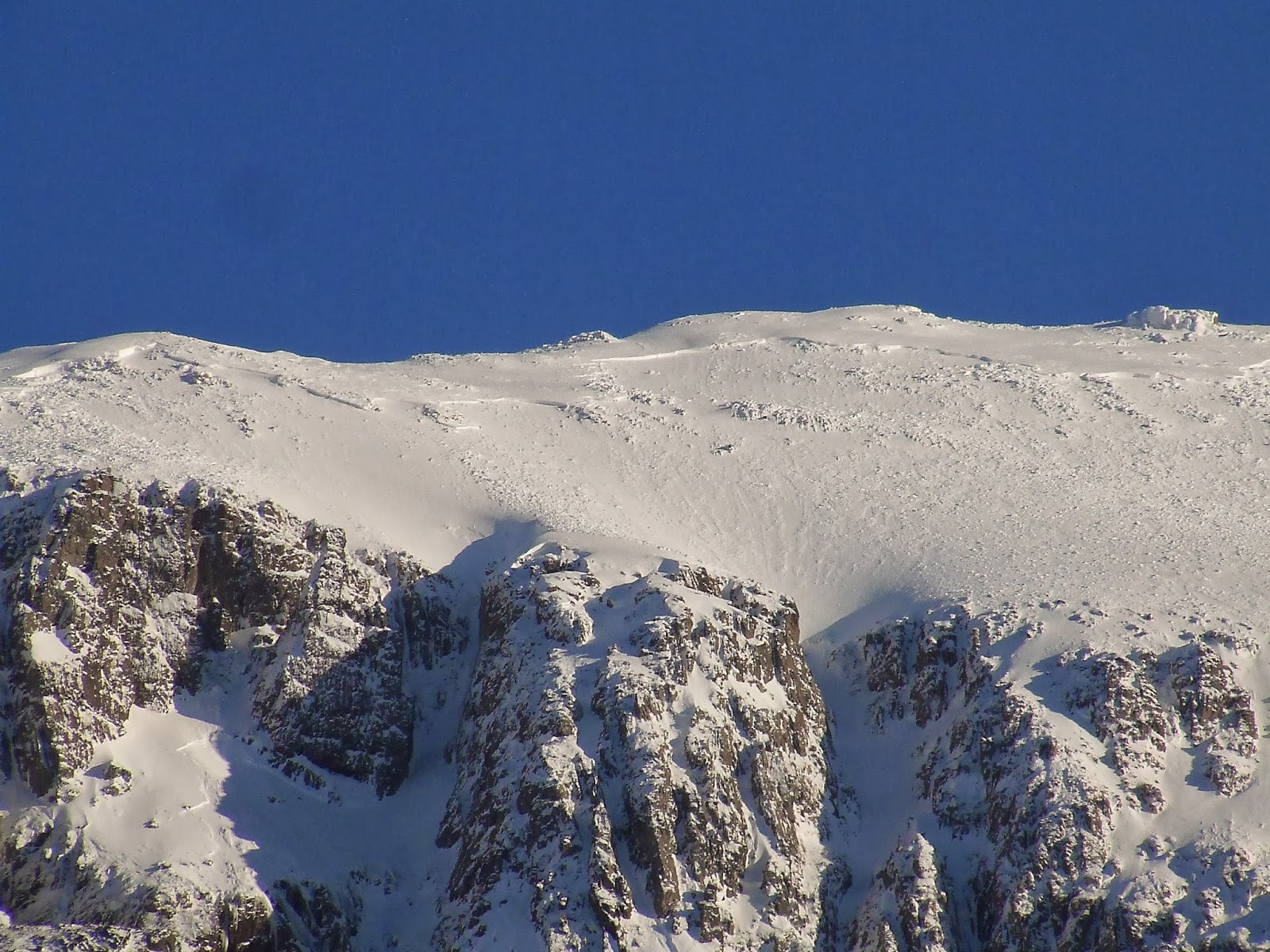 Another year, another spell of cold weather and deep snow! The West Face of Aonach Dubh, pictured above, suddenly avalanched overnight in March 2010. The crown wall (where the slab of snow detached) can be seen running across the top of the slope and in fact spanned the entire wall. The avalanche was huge in size and, if anyone had been climbing on the wall at the time, they would certainly have perished.

I went up into Coire Bheith a few days later to examine the devastation for myself. 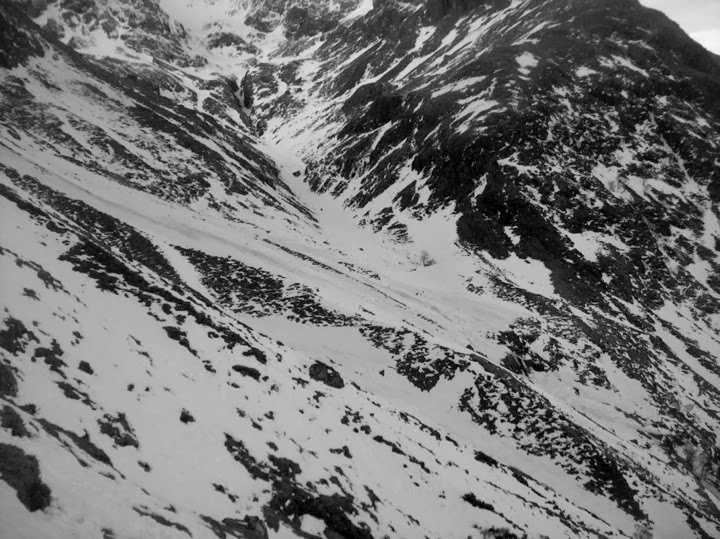 The entire topography of the corrie had been subtly altered. Huge tongues of debris snaked across the mountainside, filling up watercourses, smoothing over the terrain, hiding entire gorges. Trees had been smashed to pieces and strewn in all directions. 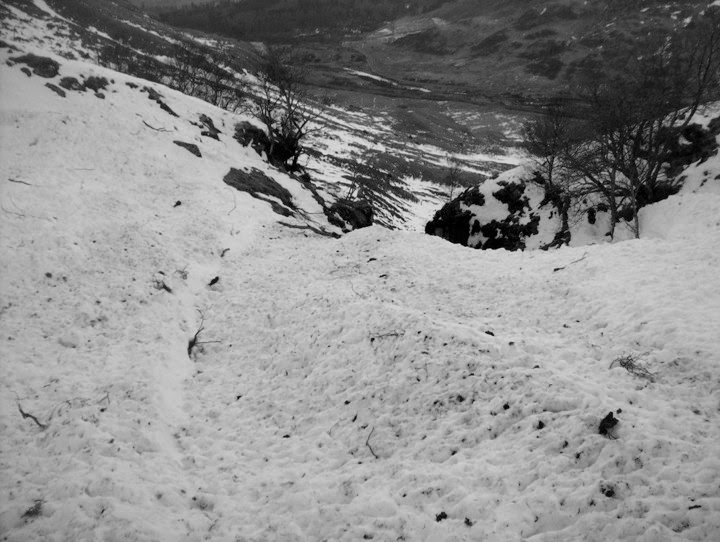 Standing on the debris floes in the corrie floor was quite a profound experience for me. Looking up at the West Face high above, I could imagine a thousand tonnes of snow sweeping over the cliffs to smash and destroy everything far beneath. The compacted masses of snow took several months to melt and, as late as May, huge blocks of weathered ice could be seen in the caverns behind waterfalls only a few hundred yards from the road.

So there you have it: avalanches can happen to anyone, and will happen to the unprepared or ignorant.