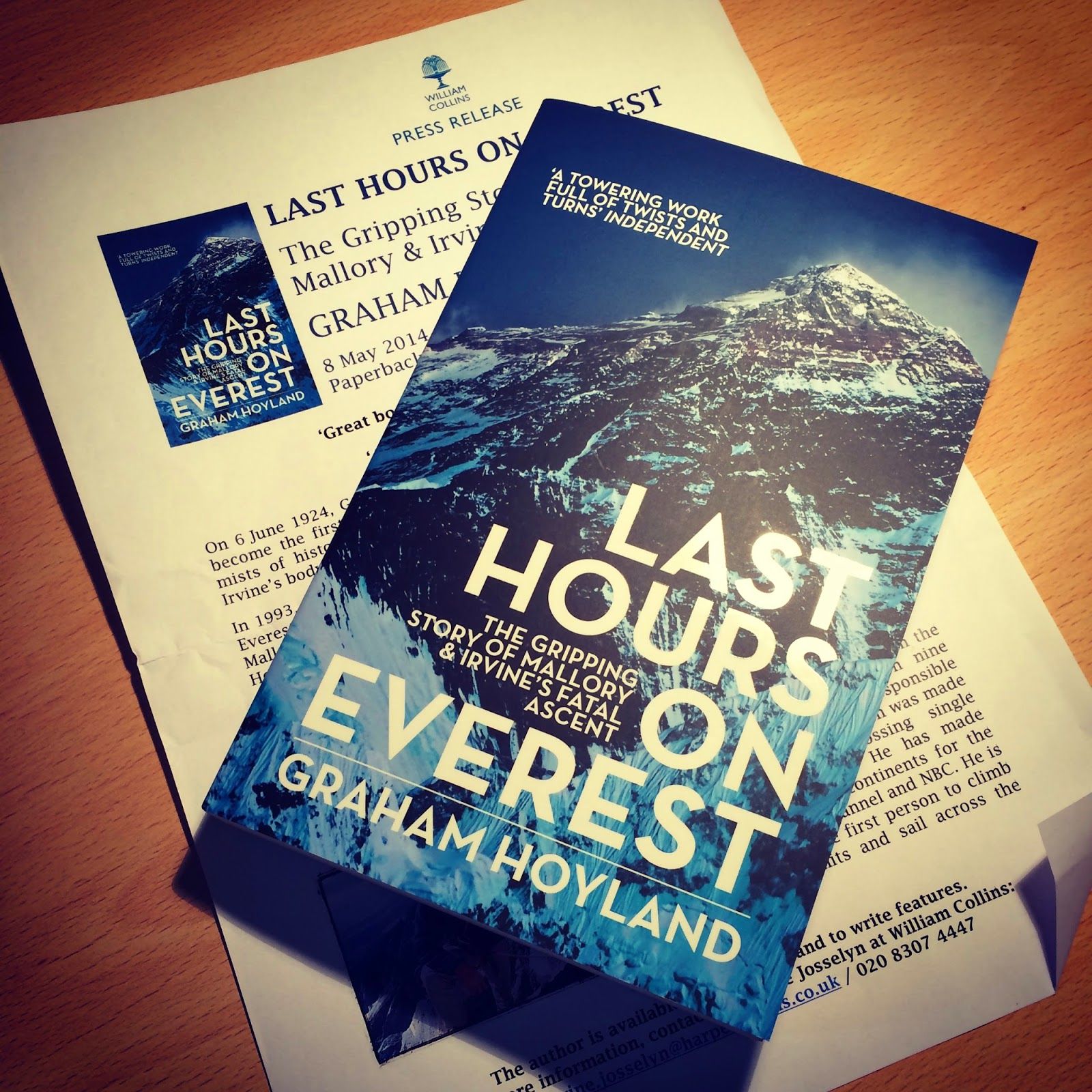 It’s customary to begin reviews of Everest books with the phrase “Much has been written on this subject.” Well, much has indeed been written regarding George Mallory and Mount Everest, but as I hope to demonstrate in this review, I believe Graham Hoyland has a great deal of value to say on the subject — and might even have done more to solve the mystery of George Mallory and Sandy Irvine than any other individual to date.

In 1924, George Mallory and his companion Sandy Irvine perished near the summit of Everest, but nobody has ever been able to establish whether or not the pair actually made it to the top. Graham Hoyland has made it his life’s work to find out the truth. He first heard about the mystery from his relative, Howard Somervell, who had been a member of the fateful 1924 expedition. Obsessed by the question since boyhood, he became a mountaineer so that he could climb Everest himself and search for the camera of George Mallory, long believed to be the most reliable piece of evidence that might help to prove or disprove Hoyland’s theory that Mallory got to the summit.

The Mallory legend is a romantic one, which helps to explain why it has endured for so long. Mallory was talented, attractive, and had an obsessive relationship with the mountain he both hated and felt compelled to return to again and again. The notion that he may have reached the summit almost thirty years before the first recorded ascent, in 1953 — and with drastically more primitive equipment — is a romantic legend, and it’s one that I have wanted to believe for a long time. Everyone seems to have a theory but the truth remains obscure.

Where Last Hours on Everest differs from all the other books on the subject is the fact that the author is a genuine expert on the subject. He has gone far, far beyond most other Mallory researchers, and his expertise — not to mention his obvious passion — helps to bring this story to life more convincingly than ever before.

Graham Hoyland has been to Everest many times, achieved the summit, searched the icy slopes for relics of 1924. The idea of recovering Mallory’s body and finding evidence was originally his, and I was interested to read how control of the 1999 expedition was taken from him. Eventually Mallory’s body was found by Conrad Anker and, although much valuable evidence was discovered, the way pictures of the corpse were distributed by the media caused considerable pain to Mallory’s living relatives. Hoyland, who had planned to handle the matter far more sensitively, was also very upset and the entire episode damaged his reputation.

The author has actually climbed on Everest using exact replicas of the clothing and gear Mallory wore in the 1920s. This is a key piece of evidence, and the book explains how scientific testing (in addition to Hoyland’s first hand experience of using the gear) strongly indicated that the gear would have been more than capable of keeping Mallory safe — provided he kept moving. In some respects it’s superior to a modern down suit, and the idea that the pioneers wore “lounge suits” or rough tweeds is blown out of the water.

The question of how climbing on Everest has changed over the years is an important theme in this book. The early years of Himalayan exploration are portrayed as intrinsically heroic, but the author chronicles a process of slow change ending in the present era: an age of massive commercial expeditions and the reduction of risk and uncertainty.

The character study of Mallory is relatively brief, but insightful — and does not resort to hero-worship, like some other works. In fact I think Hoyland’s ability to be objective and analytical is one of the best things about this book. He portrays Mallory as a talented climber, an intelligent man with a poetic mind, but also shows how he tended to drift through life without much drive or purpose, how he was absent-minded and forgetful, how he took unnecessary risks and put the lives of others in danger. His motivations are probed in detail; like other writers, Hoyland concludes that Mallory’s experiences in World War I, coupled with an increasing need to distinguish himself and find something worthwhile to do with his life, contributed to his obsession with Everest.

This book is not just about long-dead climbers and whether or not they were the first to climb the world’s highest peak. It’s also the story of the author himself and how his life has been shaped by the mystery (and by the mountain). I admired his honesty in discussing how mistakes were made in the search for Mallory’s camera, and the recovery of his corpse. It’s clear that he was not to blame for the media calamity that followed, but the author is humble enough to acknowledge where he was naive or made mistakes.

The meaning of Everest itself, and climbing in general, is discussed in some depth. No two readers will come to the same conclusion on this but I think the author is more qualified than most to speak about what Everest really means to human beings. He has this to say on the issue of Himalayan tragedies:

“So my answer is, no, Mount Everest is not worth dying for, but I had to risk my life to understand the question.”After years of believing that Mallory reached the summit, he describes the legend as “a dangerous and seductive fable” that has indirectly resulted in more deaths on the mountain.So, did Mallory and Irvine get to the summit of Everest? The answer is that we still don’t have enough information. The author evaluates each piece of evidence carefully, placing great importance on some but dismissing others. Ultimately the most important relic — Mallory’s camera, which may contain undeveloped film of a summit photo — remains hidden, and until it’s found I don’t think we will have an answer. As Hoyland says, however, it’s very difficult to prove that they didn’t reach the summit.

I admire the way the author’s views changed from unwavering belief in the Mallory legend to a more more objective point of view. His analysis is sound. He favours simple theories over complex ones, looks critically at the evidence, and is not afraid to change his ideas to fit the science or the facts.

Some reviewers have complained that the book contains “too much Hoyland” and not enough Mallory. I’m afraid I simply don’t agree. Mallory’s side of the story has been told numerous times by numerous writers, but what makes this book compelling is that it’s more than just Mallory-and-Irvine-did-they-or-didn’t-they? For me what makes this book stand out is Hoyland’s own story, which is full of both triumph and disappointment in equal measure. It’s honest and unflinching in describing both.

This is not a book that aims to put Mallory on a pedestal, and it certainly doesn’t pretend to have all the answers, but what it does offer is truth, sound reasoning, and a damned good tale told by a confident writer. It’s a worthy addition to the canon of books on the subject of Everest and Mallory and I finished the book with a deep sense of respect for Graham Hoyland and his dedication to solving the Everest 1924 mystery.

Last Hours on Everest is available to purchase in hardback, Kindle, or paperback. The paperback edition was launched on the 8th of May. You can purchase a copy from Amazon here.