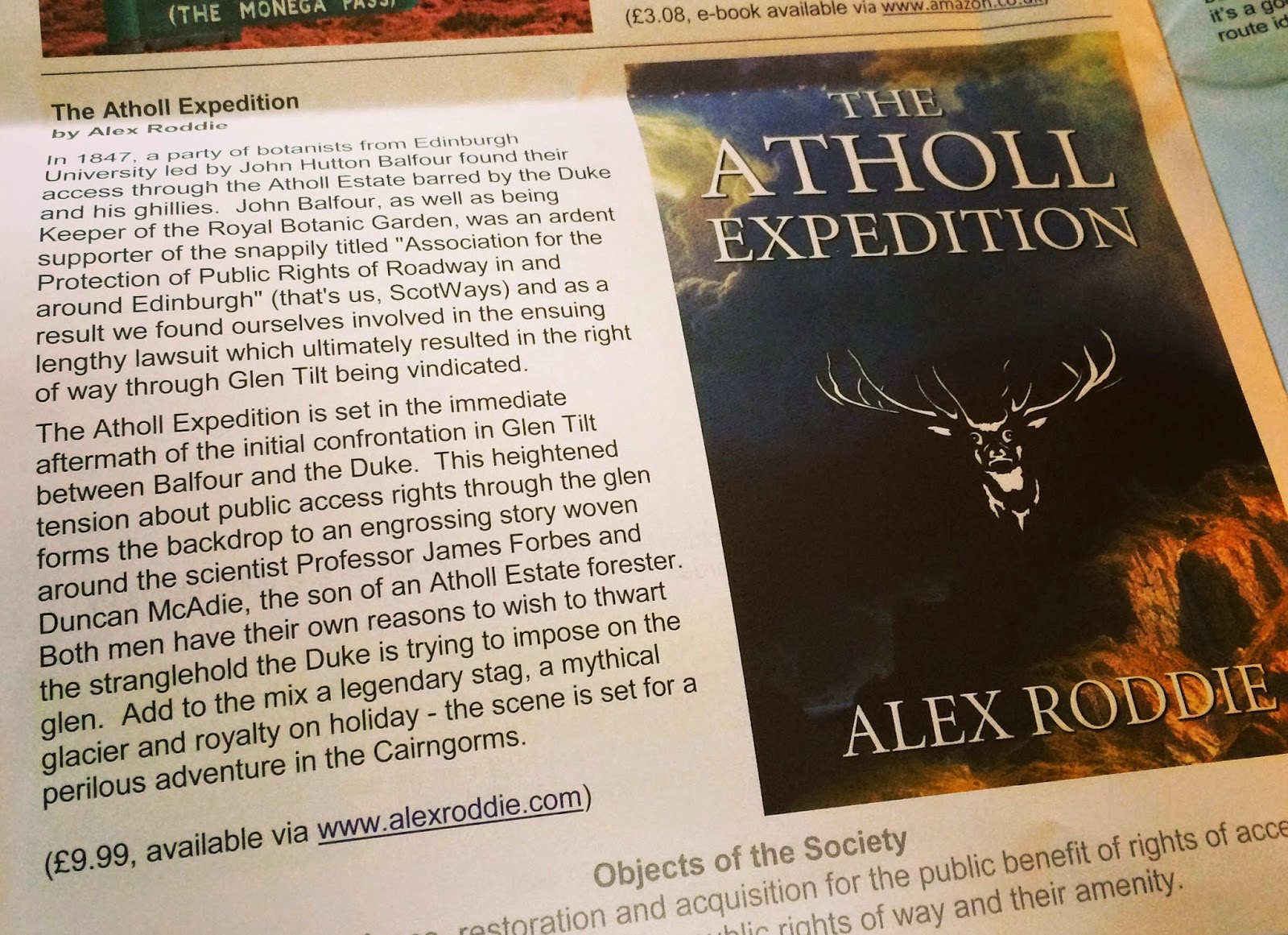 The Scottish Rights of Way and Access Society (ScotWays) is an organisation that fights for public access to the Scottish landscape — not just the mountains, but the lowlands as well. It can trace its origins back to 1845 but one of its first real tests came in 1847 during the infamous Glen Tilt access dispute. A confrontation between Professor Balfour and the Duke of Atholl caused the Duke to declare his game reserve closed to foot traffic. Public access was eventually secured after a lengthy legal battle.

My second novel, The Atholl Expedition, is set in the periphery of this momentous event. The original “Battle of Glen Tilt” is mentioned, and a second similar conflict forms part of the backbone of the story. Professor Balfour makes an appearance as a minor character (and thorn in the side of the dastardly Duke of Atholl!)

I’m very pleased that Scotways has chosen to review Atholl in their latest newsletter, and they have summed up the connection to real events far more succinctly than I ever could! Here is the full text of the review.

In 1847, a party of botanists from Edinburgh University led by John Hutton Balfour found their access through the Atholl Estate barred by the Duke and his ghillies. John Balfour, as well as being Keeper of the Royal Botanic Garden, was an ardent supporter of the snappily titled “Association for the Protection of Public Rights of Roadway in and around Edinburgh” (that’s us, ScotWays) and as a result we found ourselves involved in the ensuing lengthy lawsuit which ultimately resulted in the right of way through Glen Tilt being vindicated.

The Atholl Expedition is set in the immediate aftermath of the initial confrontation in Glen Tilt between Balfour and the Duke. This heightened tension about public access rights through the glen forms the backdrop to an engrossing story woven around the scientist Professor James Forbes and Duncan McAdie, the son of an Atholl Estate forester. Both men have their own reasons to thwart the stranglehold the Duke is trying to impose on the glen. Add to the mix a legendary stag, a mythical glacier and royalty on holiday — the scene is set for a perilous adventure in the Cairngorms.

I would urge all my readers to consider supporting ScotWays. As can be plainly seen, the principles they stand for are key themes in my books, and they do vital work in keeping Scotland’s landscape open for all.