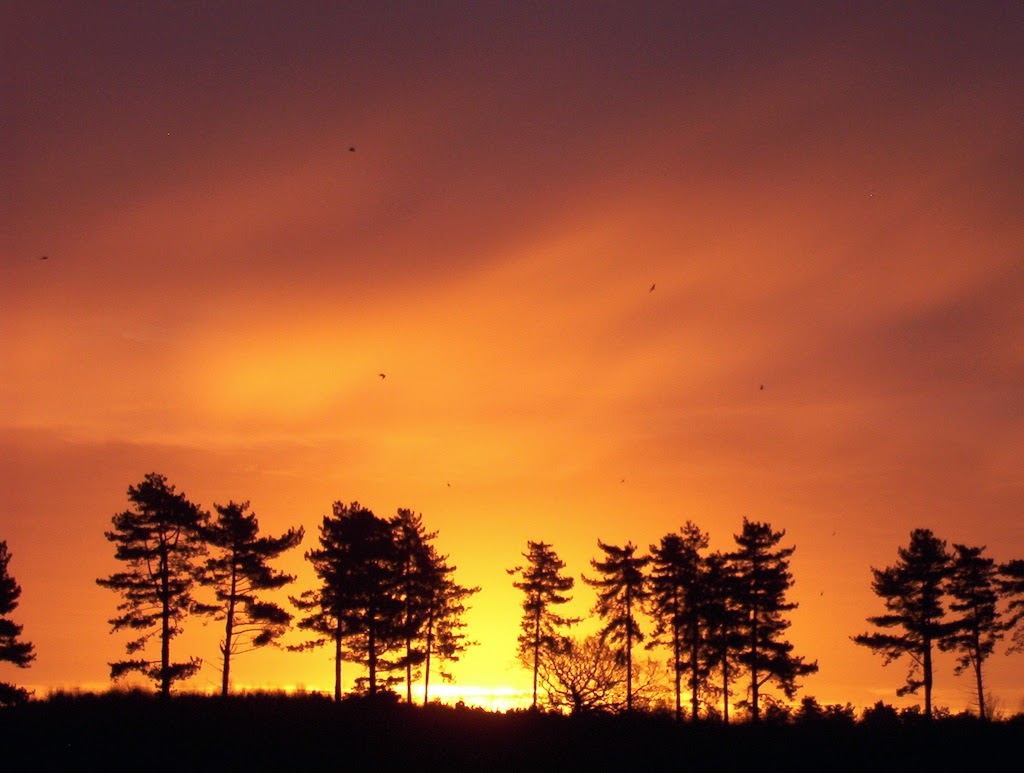 In early 2002 the Roddie family moved to a small village on the Suffolk coast. At the time I was sixteen years old and I didn’t appreciate the move. I felt that I was being taken away from my friends, and I didn’t really apply myself to making new ones during my two year stint at Sixth Form College.

At first I merely saw Suffolk as a stop-off point before University and freedom. But in summer 2002 something changed.

On the 1st of August that year I went on a hike through the forest. Sudbourne is surrounded by woodland on three sides, cut off from the rest of the world, but until that point I hadn’t really ventured into the forest by myself. I planned a ten mile route from our house in Sudbourne to Blaxhall Heath and back. The walk wasn’t anything special in the grand scheme of things — although according to my journal I saw a wild boar — but it had the effect of unlocking something in my mind. I found it astonishing that I had been able to walk ten miles without setting foot outside Tunstall Forest. It occurred to me that on my doorstep awaited a magical land ready for exploration and adventure.

Thus began a period of personal growth. I had always been introverted, quiet, and imaginative. While many young people in their late teens are discovering loud music and girls, I started a process of outdoor awakening that would eventually lead to my passion for mountaineering. (The loud music and the girls came in due course, a few years later.)

Memorable days and nights in the Suffolk Sandlings

The coastline, forests and heaths of the Sandlings form a unique landscape. Its beauty is obvious but its wildness is extremely subtle. There are no mountains here, no vast stretches of pristine wildwood or empty glens. The forests of Tunstall and Rendlesham are owned by the Forestry Commission, and largely consist of managed conifer plantation, thinned and felled on a rotation basis. The scraps of wilder forest that fill the gaps are vanishingly small. A larger collar of untamed birch woodland surrounded my home village of Sudbourne, and it was in “The Birches” that I spent many afternoons, building dens amongst the trees or fashioning stone age weaponry. This is where I developed my love of bushcraft that continues to this day (although nowadays my tool of choice is an Opinel or Mora knife rather than something fashioned out of flint!)

Even amongst the ordered rows of Sitka Spruce, planted for paper, I found many surprising fragments of wildness.

Beautiful trees are hidden in these woods. Many of them became significant landmarks, and I even gave a few of the grandest trees names. An ancient oak stands at the border of the forest, and I named him the Goblin Oak many years ago for reasons I have now forgotten.

I came to understand and appreciate the turning of the seasons, how the rhythm of sunlight and time turns the lime green of June into the burnt shades of August and finally the mellow, bountiful golds that begin to show in October. I learned the secret routes away from the main thoroughfares and discovered hollowed clearings far from any path where I would bivouac for the night with the warmth of an open fire for company.

It was a time of deep thought and observation. I went walking and bivouacking most weekends, and I spent the remainder of my free time writing.

Away from the forests themselves, I planned huge stomps around the coastline. The estuaries are guarded by riverwalls that generally carry public footpaths, so it’s possible to walk any distance you like along the coast. My favourite route became known as the Orford Coastal Route and I must have walked it well over a hundred times, but others (the South Coastal Route and the North Coastal Route) I trod more rarely due to the starting or ending points being far from my house.

Most of my big walks were conducted in 2003. My longest one clocked in at about 28 miles. I often thought about a big link-up of several of the coastal paths strung together over a long weekend, but never quite got round to doing it.

This period came to an end in 2005. By that point I had discovered hillwalking and backpacking, both of which were a direct continuation of my lowland ramblings. My first Lakeland backpacking trip in May 2005 changed my perspective and, when I returned, the Sandlings just weren’t the same anymore. I had started to get restless.

I started my three year course at UEA in September, and my focus changed firmly to mountains and mountaineering.

The gift of impermanent permanence

The Sandlings remained an anchor in the rapidly changing ebb and flow of life. I returned infrequently — at first during holidays between semesters, and later, after I moved to Scotland, I made the journey South several times a year to visit my parents and tread the old paths again.

When one sees a place every day for a year, change often gets overlooked. The Goblin Oak might have been a little fatter, a little hoarier, but I didn’t notice because the change had been gradual.

But I was surprised at the changes both large and subtle that I noticed after long absences from the places I knew so well.

Trees lurched upwards. Entire plantations grew from thickets of saplings to swaying cathedrals of pinewood and dappled shadow — only to be felled and gone on my next visit, reduced to a field of stumps and encroaching bracken. I saw trees grow, fall in an October storm, then wither and decay to a mossy bump in the ground. The forest hut I built in 2002 was a wreck by 2006 and was completely absorbed by 2010.

I became fascinated by the morphing, pulsing life of the forest and how it was at once a permanent feature in my life and yet every time I visited I saw more change occurring all around me. On one level it was a great balm for the soul to be able to return to places I had enjoyed and explored as a younger version of myself, and yet on another level the changes I perceived were not all good. Beautiful glades of larch became choked with bramble, and grand trees I had known disappeared into the leaf litter.

My parents have been trying to sell their house for over two years. They want to move closer to my brother and I, but the sluggish housing market denied all attempts to move until very recently.

They have finally sold their house. I’m here in Suffolk right now, helping them make the final preparations. Tomorrow I accompany my elderly Grandmother to the new address in an ambulance (as she is unable to stand by herself and does not travel well), and on Thursday my parents exchange keys for the new house.

Today was my very last day alone with the landscape I have known for so long.

I chose to recreate a route I first walked in October 2003. From Sudbourne I walked down to the outskirts of Orford, then struck inland along the public footpath through the old estate of Sudbourne Hall (now largely farmland). It’s a beautiful walk at this time of year when the trees are starting to turn, and there are several sweet chestnuts that give reliable crops of fat and juicy nuts. I picked up a pocketful of them as I walked.

The last time I did this route was several years ago and I couldn’t help comparing today to my first visit. The avenue of horse chestnuts hadn’t changed much, but there’s a spinney of grand old beech trees a little further along, many of which are host to ancient carved graffiti. The giant beeches of the Sandlings are starting to succumb to fungus infections and, sadly, these are no different. Two of the biggest are gone entirely; another now exists only as a stack of mossed-over logs.

My route finished at the prow of grassland overlooking the Butley Creek. I’ve enjoyed many sunsets here and it’s a place of extraordinary calm, miles from the nearest road and disturbed only by the warbling of wading birds. Walkers rarely visit; I’ve never seen anyone there but me. This is a beautiful hidden pocket of wildness and I’ve never found anywhere quite like it.

It feels incredibly strange to know that, in all likelihood, I won’t return to these places — but I’ve actually been very fortunate. As I mentioned earlier, my parents have been trying to move for a long while and every time I came to visit I wondered if it would be for the last time. So I have said my goodbyes gradually … and every renewed visit has been a gift.

I have been blessed with two extra years I didn’t think I’d have: two years to wander around my favourite places with a renewed appreciation, fuelled by the knowledge that these visits couldn’t continue forever. That’s a precious thing. 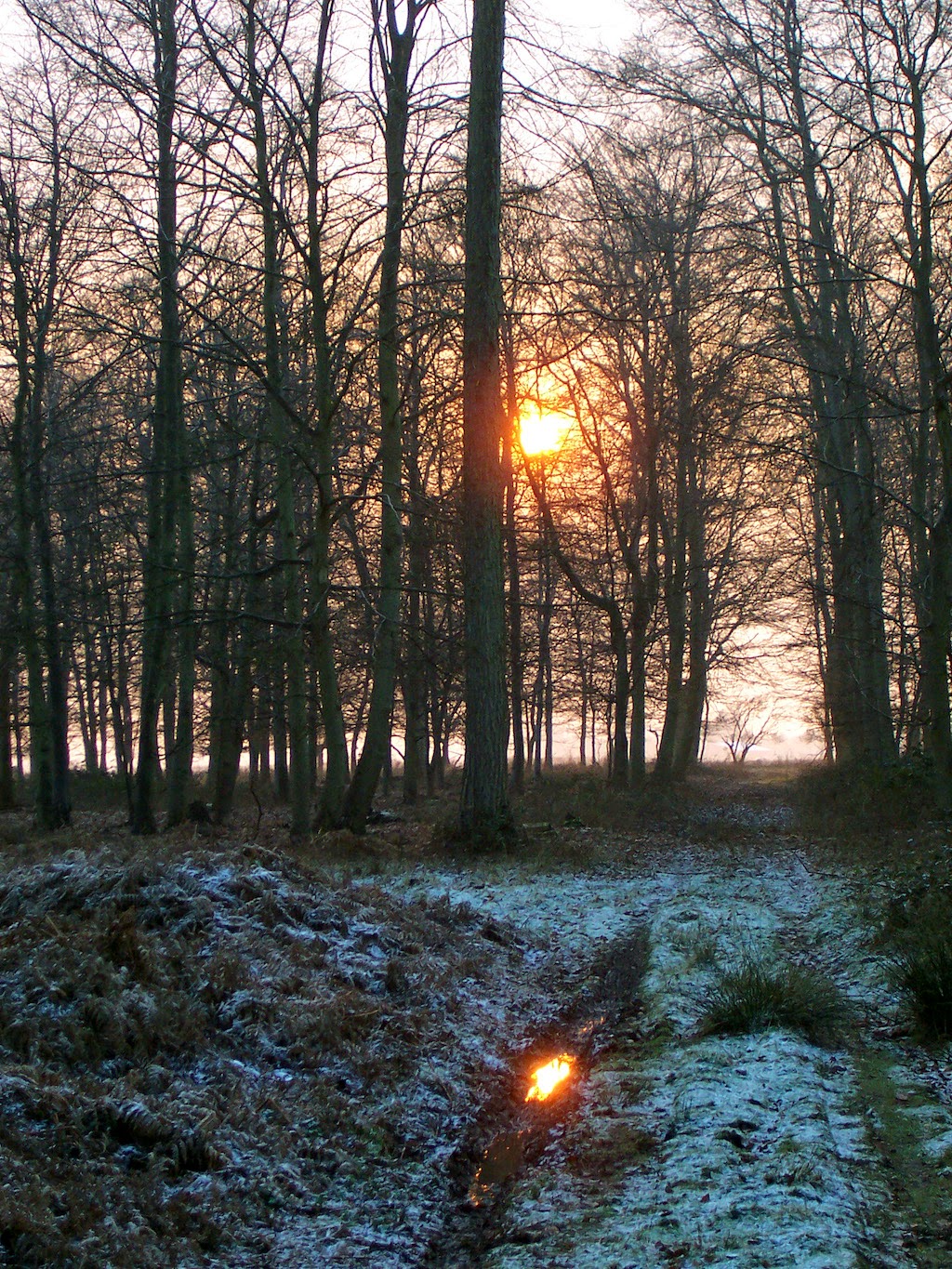