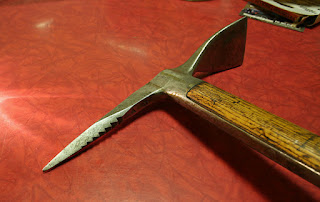 This is the Prima ice axe, similar to the one used by pioneering English climber Owen Glynne Jones in his last few years of life. Jones was killed on the Dent Blanche in 1899 and the splintered remains of his axe, and a few other items, were discovered on the glacier below afterwards. These relics–symbols of the transition between the old world of Alpine climbing and the new world, fast, light, and guideless–eventually found their way into the Zermatt museum of Alpine antiquities. His mortal remains ended up at the remote Herensian capital of Evolene where his tomb, to this day, remains a place of pilgrimage for the few who know where to look for it.

What fascinates me about climbing equipment is how attitudes to mountaineering have changed as the equipment has developed. This is a theme that I explore in The Only Genuine Jones. Jones was a man who operated at the leading edge of what was possible with the equipment of his day. An ice axe can tell you a lot about the man who wields it. The picture above tells me that Jones demanded a great deal from his equipment; he wanted an axe capable of the most precise step-cutting on steep ice, with aggressive teeth for the times when step-cutting wasn’t enough.

Modern climbers often have a hard time picturing what mountaineering was like in the last years of the 19th century, which is why I spent a lot of my time in Glencoe learning the techniques of the past and wielding these comparatively heavy, yet strangely graceful, implements for myself. Better knowledge of the ancient art form of step-cutting, almost forgotten by the climbers of 2012, led to deeper respect and understanding of the men and women who first explored the mountains now enjoyed by thousands.

Climbers owe these pioneers everything. I think there is something wonderful about the vision of a solitary man, clad in basic woollen clothing and carrying a bare minimum of unimaginably primitive equipment, looking up at an unknown mountain and saying to himself, “I will climb that, come what may.” It’s a frame of mind almost completely alien to the present day (in any field of endeavour, not just climbing) and I think it’s thought-provoking to put yourself in that position and marvel at the pluck of these legendary heroes of the past. 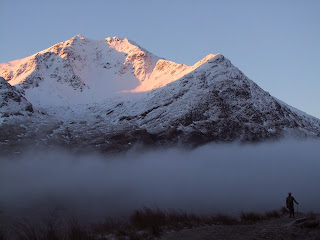