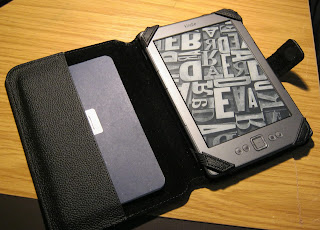 I’ve finally got one!

For several years now I’ve been an ebook convert. The tipping point happened in 2007 when, on a trip to the Alps, my brother and I ended up buying so many books to read during the month of our excursion that we almost went over our baggage allowance; it occurred to me that a better system was needed.

In 2008 I bought an iPod Touch and used that to read Kindle books, but the battery life wasn’t up to the challenges posed by a two or three-week trip (and my experiments with solar energy weren’t hugely successful).

The next experiment came in the form of a 2001 Palm computer found on Ebay for a few quid. It took AAA batteries–which meant no recharging issues when away from civilisation–and could be loaded up with hundreds of Project Gutenberg ebooks on an SD card. The setup works excellently (it can even be fitted with a highly effective folding keyboard for writing on the go), but the more I started to read ebooks the more I realised I needed something better than a tiny reflective square of plastic.

After a brief experiment with reading on my Nokia phone (a better experience than the Palm, albeit a little buggy) I made the leap and bought myself a Kindle.

My first impressions are entirely positive. The device is precisely the right size–somewhere between a PDA and an iPad–and immediately struck me as being the perfect writer’s companion. Not only can you fill it with books, you can load a vast array of other research material into the memory. One of my research habits is to keep a folder of ‘cuttings’–scans from books, images downloaded from the web, maps, and so on. These can all be converted to PDF and stored on the Kindle for instant retrieval. 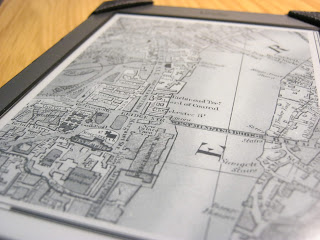 The e-ink display is precisely what is needed for viewing this kind of document: clear, crisp, and easy to read in sunlight. The long lasting battery also prevents any worries about the device running out of juice before the end of a trip, and it’s much lighter and less bulky than anything else of its type I have used (even the Palm with associated case, keyboard, and batteries weighed more).

I’ve only had the Kindle for a couple of days so am still getting used to it, but I expect it to be an invaluable aid in the course of my research for 1848. At the moment my main tasks are reading and making notes, both of which should be much easier from now on!