Part of my research for 1848 has involved a study of the cartography and glaciology of that decade. The Alps were only partially explored, despite Chamouni (modern-day Chamonix) being almost permanently overrun by tourists from every corner of Europe. Mont Blanc had been climbed dozens of times, but most other areas of the Alps slumbered in obscurity and only a few scientists had begun the laborious process of exploring the rest of the region. Entire valleys remained unknown to outsiders.

A study of Alpine maps from the 1830s and 40s is fascinating. Keller’s map was still the authority, proclaimed by Albert Smith to be ‘singularly faithful’, yet Forbes complained of gross inaccuracies in almost every part of the map–to such an extreme extent that entire mountain ranges were missing, in the wrong place, or even completely made up.

Forbes worked on an abridged version of Keller’s map, incorporating his own data. The result is, in places, startlingly modern. The region around Col Collon and ‘Col d’Erin’ (now Col d’Herens) can be easily compared with modern maps, and of course the Mont Blanc chain was comprehensively explored by Forbes himself so is represented here with a reasonable degree of accuracy.

Other regions still betray the general level of ignorance, mystery, and superstition that would continue to obscure the Alps well into the 1850s. For example, west of Col Collon is depicted an enormous glacial mass called ‘Charmontane’, larger than the Grenzgletscher; in Forbes’ book this is referred to several times as a mythical ‘ice mountain’ yet to be explored.

Here is a sketch map based on Forbes’ chart: 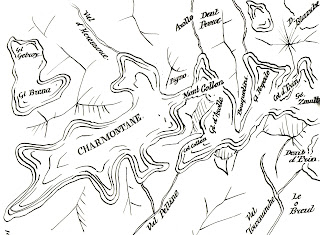 In reality, this feature exists as the Glacier d’Otemma, flowing into Piedmont from the Col d’Charmotane between Pigne d’Arolla and Mont Collon. It is a glacier of some size (and would have been even larger in the early 1840s) but only a fraction of the area shown here, and entirely different in shape.

It’s only a tiny detail of the bigger picture, put together from hints in ancient books and irregularities in obscure maps, but it’s more evidence that points towards the fact that the Alps were a very strange and unknown place before their comprehensive exploration by British climbers in the 1850s.