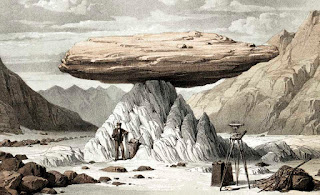 Professor James Forbes (1809 – 1868) was, in many ways, the first British explorer of the European Alps. Many other British climbers had scaled Mont Blanc, or journeyed throughout the Alps and climbed various mountains here and there–but none of them, until this remarkable man came along, ever made a methodic and scientific study of the mountains on anything like this scale.

Forbes first visited the Alps in an age of ignorance, superstition, and astoundingly inaccurate maps. By the time he published his book “Travels Amongst the Alps of Savoy” in 1843, he had toured every mountain chain in the Alps many times, established his own system for safely traversing glaciers and climbing mountains, solved the mysteries of how glaciers function, and taken the first steps towards accurately mapping the region. Together with less scientific efforts from the likes of Albert Smith, he opened the flood gates and allowed the legendary golden age of Alpine exploration to begin. I think it’s no exaggeration to say that, if it wasn’t for the almost unbelievable deeds of Forbes, mountaineering as we know it today would not exist.

His book is a marvel of writing, occupying the neutral ground between a scientific document and an adventure story. I have visited the Alps several times over the last few years but his writings really opened my eyes to the remarkable early history of the region, and proved what an alien world the Alps of 1842 are to the modern reader.

Some quotes that I particularly enjoyed:

“Happy the traveller who, content to leave to others the glory of counting the thousands of leagues of earth and ocean they have left behind them, established in some mountain shelter with his books, starts on his first day’s walk amongst the Alps in the tranquil morning of a long July day, brushing the early dew before him, and, armed with his staff, makes for the hill-top–begirt with ice or rock, as the case may be–whence he sees the field of his summer’s campaign spread out before him, its wonders, its beauties, and its difficulties, to be explained, to be admired, and to be overcome.”

“… thought is without fatigue when each passing event gives a varied tone to it and when each step furnishes a new subject for its exercise, and we read the axioms of her philosophy indelibly engraven on the eternal hills.”

“… we turned and surveyed, with a stronger sense of sublimity than before, the desolation by which we were surrounded, and became still more sensible of our isolation from human dwellings, human help, and human sumpathy–our loneliness with nature, and, as it were, the more immediate presence of God. At such moments all refinements of sentiment are forgotten; religion or superstition may tinge the reflections of one or another, but, at the bottom, all think and feel alike. We are men, and we stand in the chamber of death.”