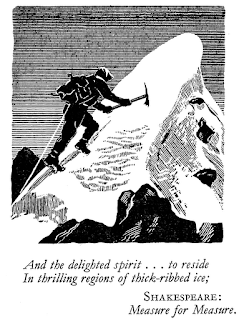 In the steamy, stuffy Midlands, ‘neath an English summer sky,
When the holidays are nearing with the closing of July,
And experienced Alpine stagers and impetuous recruits
Are renewing with the season their continual disputes–
Those inveterate disputes
On the newest Alpine routes–
And inspecting the condition of their mountaineering boots:
You may stifle your reflections, you may banish them afar,
You may try to draw a solace from the thought of “Nächstes Jahr”–
But your heart is with those climbers, and you’ll feverishly yearn
To be crossing of the Channel with your luggage labelled “Bern,”
Leaving England far astern
With a ticket through to Bern,
And regarding your profession with a lordly unconcern.
They will lie beside the torrent, just as you were wont to do,
With the woodland green around them and a snowfield shining through;
They will tread the higher pastures, where celestial breezes blow,
While the valley lies in shadow and the peaks are all aglow–
Where the airs of Heaven blow
‘Twixt the pine woods and the snow,
And the shades of the evening deepen in the valley far below.
They will scale the mountain strongholds that in days of old were won,
They will plod behind the lantern ere the rising of the sun,
On a “grat” or in a chimney, on the steep and dizzy slope,
For a foothold or a handhold they will diligently grope–
On the rocky, icy slope,
(Where we’ll charitably hope
‘Tis assistance only Moral that they’re getting from the rope …)