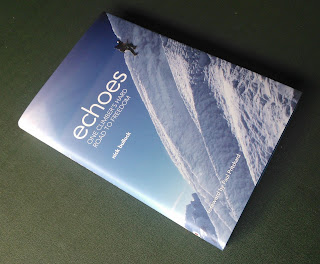 Echoes: One Climber’s Hard Road to Freedom, by Nick Bullock

This book has just been released in the UK.

Echoes is a striking book with an evocative cover photo featuring Nick surmounting a cornice–or so we assume. On reading the photo description we learn he is actually down-climbing the cornice, and I think this crazy image sets the tone for the rest of the book!

The book is described as ‘one climber’s hard road to freedom’. The concept of freedom, and what this means to different people, is the engine that drives this remarkable story. Nick Bullock’s early life is described in engaging detail, and while at first the reader feels impatient to get on with the climbing action, it soon becomes clear how important this build-up is to the story. Just as every character is a sum of his or her experiences, this story depends just as much on Nick’s early years as it does his impressive climbs in later life.

As someone who has lived both in the flatlands and amongst mountains, I strongly identified with parts of the story. Nick was at one point stationed on the Suffolk coast, not far from where I grew up, and I can relate to his sense of being cast adrift and far from where he wanted to be. However, I also started to gain the impression at this point that, in his single-minded determination to climb at all costs, Nick failed to see the beauty and meaning in everyday existence. This impression strengthened as I read the book. The type of freedom that ‘Echoes’ champions is the result of choices most of us will never have the courage to make, but I think his total rejection of a normal life betrays a lack of balance–or perhaps simply a blindness to the wonders that ordinary life can provide.

The conflict between freedom and security is a prominent theme, and Nick struggles with this conflict for many years before making his definitive choice. Although these concepts do interplay, I gained the impression that the author sees them as mutually exclusive; that, for him, he could not have the freedom he desired while also having the security of a job for life. “Security is a sentence” is one quote that particularly intrigued me. It’s a fascinating glimpse into the mind of a truly obsessive and committed climber–one who is not able to fully function in regular society.

The climbing scenes are intense, although I noticed a pattern emerging after a while: the author attempts something at the upper limit of his capability, before falling off and almost killing himself (then apparently not learning from this experience!) Gripping as the climbing scenes are, I must admit that towards the end of the book I found them becoming a little repetitive. The scenes are fairly jargon-intensive and might be difficult to understand for the non-climber. Nevertheless, the description is frequently superb and the imagery is masterful.

Perhaps my minor criticisms are unfair. The author is not an ordinary person and his extraordinary life translates into an extraordinary story, written with skill, feeling, and truth. It provides unique insights into the mind of a truly committed climber, and the reader finishes the book with a profound understanding of the conflicts and motivations that make such a unique person get out of bed every morning.

Echoes is a brilliant book and should be essential reading for everyone with an interest in mountaineering and climbing.