Like many writers, my work is inspired by one thing above all else: landscape and its human context.

My work is historical fiction first of all, but it’s also adventure writing about mountains and mountaineers. These adventurous activities would not exist without the geography of hills, crags, gorges, icefields, cornices, chimneys, aretes, and scree-slopes; and yet, the landscape itself would have no meaning to me as a writer without the human context. Over the centuries, humans have explored their mountainous surroundings, given names to peaks and glens, risked their lives (and often lost them) to make first ascents, left their mark on the landscape.

These whispers of human activity are everywhere in the mountains even though we think they are wild places. The summit is topped with a cairn built by human hands. The hillside is cut by an eroded path. Even the remote cliff face, unexplored for a hundred years and dripping with slime, will often bear some trace of the pioneers who passed that way decades before: a rusted piton protruding from a crack, or the scratch of a crampon point on rock.

Open a guidebook and the trails blazed by human explorers cover the mountains like a thousand luminous threads. Human legacy is everywhere in the mountains.

As a writer, I draw inspiration from the complex forces that bind humanity to mountain landscape. My time spent in Glencoe was particularly special from the perspective of a writer, because I had an opportunity to develop my own special connection with the landscape around me. I explored the places where people had been before, using the guidebooks; then I put the guidebooks away and sought out the few places that people had never been. I wrote up my explorations in a “crag book” which I illustrated with diagrams showing my routes of ascent.

Climbing bears many similarities to a good story: triumph, tragedy, danger, and struggle; moments of beauty and moments of defeat. It’s no accident that the mountains have inspired innumerable books, poems, paintings, and pieces of music. 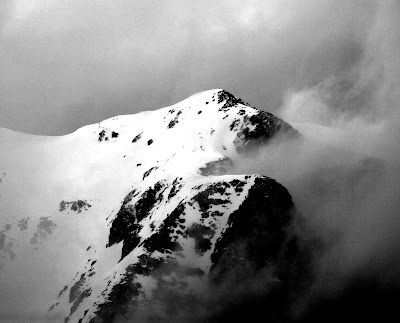