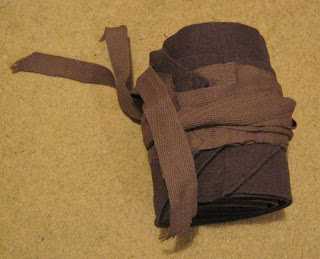 Regular readers will be aware that, during my time in Glencoe, I did a bit of practical research into 19th century climbing equipment. It’s a subject that has been very influential towards my writing. The Victorian pioneers climbed mountains in a very different way to the mountaineers of the 21st century, and I think as an author who also climbs, doing a bit of experimentation was an obvious step to take!

My old articles on the subject can be found here, but for the benefit of my current readers I thought I would write some new pieces on the items of climbing gear the Victorians would have used (especially the ones modern readers will be unfamiliar with).

This is an article of clothing that today will only be recognised by members of the armed forces, as I believe puttees still feature in their ceremonial uniforms. They were introduced in the 1890s to members of the British forces serving in India. In form, they are a simple strip of cloth or webbing, between one and four yards long,  with a thinner strip of stronger material sewn at one end.

This is how they were worn:

The band of cloth is wound in a spiral from the ankle up the calf, finally secured by knotting the thinner strap. The entire assembly is designed to keep stones, mud, and snow out of the boot; it also protects the lower leg. Although puttees first saw common use in the military, they were soon adapted by mountaineers, particularly in the first years of the 20th century, to help keep their feet dry and warm in the mountains.

Modern climbers use gaiters for this purpose, nowadays commonly made of Gore-Tex fabric, fastened with a zipper down the front. Gaiters are waterproof and quicker to put on and take off. They do not freeze or fray, and commonly have a lifespan of many years. There is evidence that some pioneering climbers also used gaiters (made of canvas and laced or buckled instead of zippered).

Despite the many advantages of modern gaiters, my experience of using puttees has led me to appreciate some of their unique benefits. Firstly, they are far more adjustable, and can easily be made as tight or as loose as the wearer requires. Although they are not completely waterproof, they are also more breathable than gaiters and don’t make the feet perspire. They are far more durable than Gore-Tex material and can take a huge amount of punishment (a useful quality on an Alpine climbing tour). They are light and highly packable. Perhaps most importantly, a puttee is a very adaptable piece of equipment; it can be used as a bandage, a sling, or torn into strips and turned into a makeshift lashing.

I wore puttees for some of my Scottish climbs, and when climbing in deep snow they certainly keep the feet dry and warm. They froze solid on a couple of occasions, making the straps difficult to untie. Sometimes they came loose and had to be adjusted halfway through the day. In January 2011, when climbing on Ben Lui, the fastening strap of my left puttee actually came off altogether, forcing me to remove it and simply tuck my trouser leg into my sock!

I have recently been trawling Ebay for a new pair of puttees to replace my old worn-out ones. I managed to find two pairs of the short type–the older long ones are incredibly rare and difficult to find–and bought them for only £7.50 a pair in excellent condition. This time I want my puttees long enough to reach all the way up my calf, so I intend to modify them by sewing the two pairs together to double the length. I will be sure to report back on their performance.

In conclusion, puttees are a minor but notable part of our mountaineering heritage. They are a good example of how technology has been used, improved upon, and left behind by the march of progress. As a modern climber, using puttees instead of gaiters is an illuminating experience that helps the wearer understand the unique challenges of mountaineering in the 19th century. The full suite of Victorian equipment (long axe, nailed boots, tweed and all!) fills in the whole picture and is a very special experience, as we shall see in future articles!