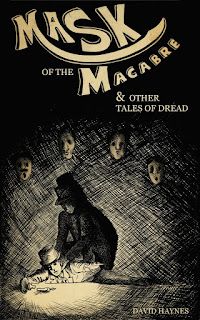 Mask of the Macabre is a new short story collection from David Haynes, recently published on Kindle.

I really enjoyed this collection of Victorian horror stories from David Haynes. In character they reminded me of the work of Poe, or some of H.G. Wells’ tales of mystery: atmospheric stories with a focus on the darkness within the human mind. I was also reminded of certain scenes in Dracula (although this is not a book about vampires!) Pleasingly, each tale is linked together by a common thread, making this more akin to a novella than a collection of unrelated stories.

The setting will be a familiar one for many readers of historical fiction. London in the 1860s is recreated in a poetic rather than strictly accurate fashion, but I felt this approach suited the tone of the piece. The reader is taken to Bethlem lunatic asylum, a decayed stately home, a theatre. The characters we meet are very memorable and I found Doctor Harvey particularly fascinating.

I felt that the stories really got going after the first one, which wasn’t as well written as the other pieces. The language and dialogue initially felt a little strained, as if the author was trying to replicate a 19th century feel without much confidence. However, from story 2 onwards the writing was more fluid and the characters and stories really began to shine through.

In terms of historical accuracy, by and large the author gets it right. There are a few areas that didn’t quite ring true (for example, certain interactions between upper and lower class characters) and I get the impression that the author is still building his confidence with period dialogue. However, in stories like these it hardly matters: it’s all about atmosphere and tension, both of which are supplied in copious amounts.

Overall these tales are skilfully told, and I believe David Haynes has a lot of potential in this genre. It feels like he is just starting to stretch his wings in the broad skies of the 19th century, and with more practice and research he could produce some truly brilliant pieces!