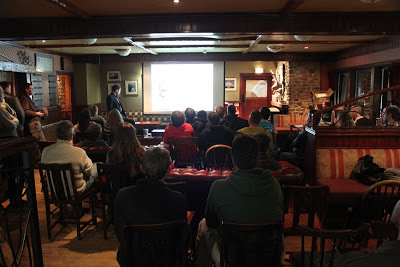 Well, the long anticipated date has come and gone! Yesterday I took to the stage in a room I know well, having worked there as a member of staff between 2008 and 2011. On this occasion  I was there as an author and speaker. The journey of life can be strange at times, but in many ways yesterday evening felt like a natural culmination of my time in Glencoe and was, of course, the crowning pinnacle of my writing career to date. The Only Genuine Jones has been launched as a paperback special edition and has been given quite a sendoff.

Hannah and I enjoyed a meal with our friends before setup began. I dragged the boxes of books in from reception, set up my laptop and projector, and for a few minutes I felt like a member of staff again as I helped Alan clear the tables and shift around the chairs.

People started coming in not long after 8:30. After a final shout out in the Boots Bar to round up any stragglers, I ordered a glass of water from the bar and commenced my talk.

I didn’t do a headcount, but I would estimate about 50 people were present–a mixture of friends old and new, readers, fans, and walk-ins. I was a little nervous as I took to the stage, but plenty of friendly faces in the audience kept me going! Strangely I forgot to refer to my prompt cards during the talk, and basically ad-libbed it, which worked well I think although there were a couple of occasions when I forgot items I had intended to mention.

Timings worked out well; I talked for about 15-20 minutes and read for about 5 minutes. The scene I chose to read from Chapter One was also just the right length I think.

After the talk and reading, it was time for the book signing to begin!

I sold 32 books in all, which is fantastic. I managed to have a chat with most of the people who came to the launch although I decided against an open Q&A session in the end, mostly to avoid dragging out the talking part of the evening too much (you can only expect to keep an audience’s attention for so long, after all). I had intended to give out vouchers with a code for downloading a free copy of the ebook, but forgot to give them out to some people who bought books–if you’d like one then just get in touch!

I left six books at reception in the inn for them to sell to anyone else who might want one, and apparently two of them have been snapped up already so I don’t think they will last long.

Last night was an unqualified success and I’m tremendously pleased to have got the paperback edition of The Only Genuine Jones off to such a fine start. Initial sales have been very strong (when combined with pre-orders and healthy Amazon sales) and Crowley’s Rival has also been doing very well over the last few days, with over 130 downloads and counting since Monday and a respectable Amazon rank of #475 (at the last check!)

Thank you to the staff at the Clachaig Inn, my friends and loyal fans, and everyone else who came and helped make the book launch such a fantastic success. Same time next year for book 2? (Hopefully!)


Plenty of people unable to attend the launch have ordered signed copies, and as of tomorrow I will begin to fulfil those orders. If you have reserved a copy but not yet paid for it, the books are £7.99 plus £2 postage and I accept either PayPal or direct bank transfer; email me and we’ll get it sorted out. I currently have enough stock to fulfil all existing orders although it’s going to run out pretty quickly. After next week I will have to order another print run before I can accept new orders for signed copies.

Don’t forget, you can also order the book from Amazon, Waterstones, or direct from the printers. Check out the book’s page for the full list of ways to get hold of the book.