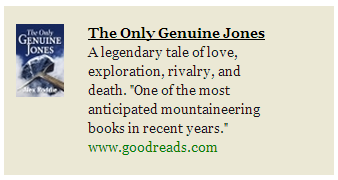 Goodreads is a social network I have been trying to get to grips with for some time. For those of you who have yet to delve into its wonders, it can be summarised as Facebook for book lovers. It has all the trappings of a social network (profiles, timelines, comments, ‘likes’, friends and so on) but is exclusively about books. It has a large number of members and most books available today are listed on the site, so it’s a brilliant tool both for book discovery and–theoretically–book promotion.

The great thing about Goodreads is that when someone adds a book to their ‘to read’ shelf, or reviews it, that information is propagated to their network (potentially via Facebook and Twitter as well). This can create a viral ripple effect through which hundreds or thousands of new readers can discover a book.

I set up the Goodreads page for my novel on publication day, and on a whim decided to drop $28 on an advert to drive traffic to the page. Goodreads ads are ‘pay per click’, which means your funds are only used up when people actually click on the advert. The goal of this exercise was to get people to add the book to their ‘to read’ shelf.

Goodreads is starting to work out well for me. Eleven readers have added the book to their shelves, which is a great start, and I have received a total of eight ratings (of which five are full-blown reviews). My average score is 4.38, which is brilliant. I have seen direct evidence of at least two readers discovering and buying the book thanks to seeing it on Goodreads, which is nowhere near the level of success I am experiencing with Twitter (which has been directly responsible for well over a hundred sales to date), but it’s still positive.

However (and this is a big one), my advert campaign is proving to be completely useless.


None of the people who have added my book on Goodreads have done so because of my advert. I get a daily email telling me how many people have clicked on the ad, and the figures are pretty dire.

7,608 people have viewed the advert since publication day on October the 21st. Two people have clicked on it, and neither of them have added the book.

So far, the Goodreads ad has been a complete waste of money. There are several possible reasons why this may be the case.

Will I be paying for another Goodreads advert in future? I doubt it, as for an indie author with limited funds it simply is not cost effective. However, I will continue to put effort into Goodreads as I believe it’s one of the best tools we have at our disposal for finding new readers.
Authors: please share your experiences with Goodreads ads! Have you used them? Did your campaign work out better than mine, and if so, do you have any tips to share?