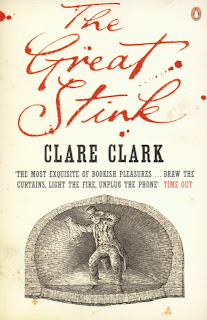 The Great Stink by Clare Clark
My rating: 3 of 5 stars
The Great Stink is one of those books that immediately grabbed my attention. It’s an historical novel set in London during the industrial surge of the 1850s, and revolves around the tragic figure of William May, a civil engineer with the Metropolitan Board of Works. He’s a veteran of the Crimean War but his present job involves the rebuilding of London’s sewer system. His character is deeply damaged and his sanity is in question throughout the story. As a result of his erratic behaviour, May is misunderstood by everyone around him and exploited by unscrupulous individuals.
The tone of the book is set from the very first line. This is a novel of sewers, of lightless tunnels, of the stink of excrement and the slippery fur of giant rats bred deep underground. There is ugliness in every character portrayed here, from the sewer tosher ‘Long Armed Tom’ who wanders the tunnels and has no respect for anything but himself, to the unscrupulous engineer Hawke who wages a campaign of hatred against May. Even May’s wife Polly, who was initially portrayed as an angelic figure, is shown to have a dark and unforgiving aspect to her personality. May himself is shown as an essentially good man who is hopelessly in the grip of his own self-destructive urges.
The descriptive language can charitably be described as dense and elaborate (and uncharitably as florid and long-winded). Paragraphs are tremendously long and at one point an entire page is used to describe the River Thames. There are a lot of adjectives and adverbs here! It worked well at the start of the book (although it did seem to pad things out and delay the real plot from getting going) but by the end it had grown wearisome.
In her quest for gritty realism, I am inclined to say that the author has gone a little too far. It’s all just a little too oppressive, too dark and hopeless. The stench of sewage permeates every single page and every character interaction.
I really wanted to like this book. It promised everything I look for in a Victorian novel, but sadly I think The Great Stink goes too far in seeking the putrid reality of London in the 1850s. There is very little hope here, and one finishes the book with a dismal impression of humanity in which everyone is struggling for their own futile ends and no overall goodness or grace will ever triumph. Even our damaged hero changes relatively little; he remains self-destructive and chaotic, on the verge of descending back into madness. He finds no lasting peace.
Would I recommend this book? Perhaps, to dedicated fans of Victorian literature, but only with a health warning!