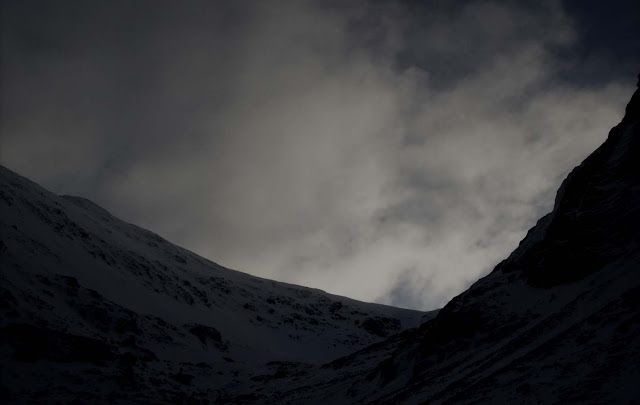 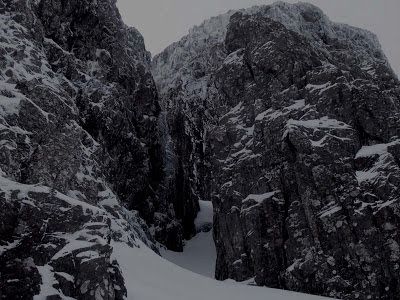 With the greatest of care I crept back down to my crevasse where I paused for a little while to think about my position. Well, I thought, why not climb something a little easier? The lower right branch of the gully was more straightforward and ought to be safe enough, even in the dark.
I traversed the slope towards the second gully entrance. A step of water ice reared up in front of me, short but sharp, a groove of perhaps five metres that had to be overcome. On with it, then! I swung an axe and the blade gouged a huge dinnerplate of ice out of the slope in front of me. Fragments rained down on my boots and for a moment I thought I would fall off. Just a dodgy placement, I thought, and swung again.
Once more the ice shattered. The moon blazed down, hard and cruel, and as I felt the chill through my woollen gloves I realised that the temperature must be so low that the ice had turned brittle. Was it -10? -15? I had no idea, but if it was cold enough for the river to freeze, all the way down there in the glen, then it must be cold indeed on the cliffs high above. It was time to make a retreat.
A Sudden Fracture
I climbed back down to the snowslopes beneath. On a whim I decided to head round to the other side of the hill to walk up the north ridge. I walked past the crevasse at the foot of Collie’s Pinnacle, and selected a descending traverse line on steep snow with my axe in my right hand, biting into the slope to give me security. I walked with care, every crampon point connecting with the slope.
That was when I heard the sound, deep in the pack beneath my feet. It sounded like this: WHUMP.
I froze. Suddenly the foolishness of my situation was appallingly obvious to me. I was a thousand metres up the highest mountain in Glencoe, in the middle of the night and with no headtorch. Nobody knew where I was. If I was avalanched right now, nobody would find me for a very long time. Besides, it was an awful long way down 35 degree snow to the boulders at the bottom of the cliff.
I took another step. WHUMP. This time a huge crack shot across the surface of the snow from my footprint, and I felt the ground move under me. I was walking on what amounted to a bomb on a hair trigger.
What do I do?
Before I could move another step, the slope fractured. A huge slab of snow, with me on it, sank a short distance downhill and I overbalanced, falling to my knees. Instinctively I brought my axe up and threw myself into the self-arrest position. The pick dragged through the snow and anchored fast. Fortunately the slide stopped almost as quickly as it had begun and I found myself looking into what seemed to be a bottomless crevasse where a slab of unstable snow had broken free.
It was all over so quickly that I hardly knew what just happened, but then it hit me: that was only a warning. Next time the entire slope could detach and that would be the end of my moonlit adventure.
I abandoned my plans to traverse the cliffs and instead made tracks straight down to the boulderfield at the bottom. When I reached safety I took a few minutes to sit on a rock and reflect on how close I had come to disaster once again.
Why had I taken such a foolish risk? Had I been lulled into a false sense of security by the Cat.1 avalanche forecast, or tricked by my own familiarity with this hill, thinking it would not hurt me? Did I not take sufficient care in conducting my own tests for avalanche risk? In truth I think a combination of these factors, plus the distorting effect of night on the mountain, conspired to blind me to the awesome dangers mountains can wield in the winter months when trod by the unwary.
Longformavalanchemountain safetymountains