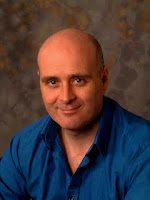 Today’s interview is with John D Burns, a man passionate about Britain’s mountains who has the unusual distinction of being the creator of a one-man play about Aleister Crowley (who my readers will recognise as the villain of my own books!) He also writes on the subject of Britain’s mountains and is currently working on a play about George Mallory and Everest.

Please introduce yourself. Who are you and what do you do?

I’ve lived in the Highlands for over thirty years. In that time I’ve done everything from ice climbing to a spell in mountain rescue. Over the last few years I’ve become increasingly interested in mountain bothies and generally enjoy spending time in the hills.

Over the years I’ve done everything from acting to stand-up comedy. I currently write my own blog and that’s been a really interesting way to get feedback on what you write.

Your one man play, “A Passion for Evil”, depicts the maverick personality of Aleister Crowley. Tell us about Crowley and why he inspires you.

I first came across Aleister Crowley when he was featured in the log book of the Inverness Mountaineering club. There was a picture at the front of the book and someone had fixed the eyes so you could move them about. It was supposed to be a little bit of fun, I suppose. I asked around about Crowley, who lived not far from Inverness, and found out that very few people actually knew much about him. There was the usual stuff about him being a mad man who practised the occult and people knew he had done some climbing but everything was pretty vague.

I wanted to write and perform a one man play in the Edinburgh fringe and I began to look into Crowley’s background as a possible subject. The more I researched the more fascinating he became. I learnt that he had been one of the leading climbers of his generation taking part in two Himalayan expeditions in the early part of the 20th century and making ground breaking attempts on K2 and Kanchenjunga. Crowley had been climbing at the forefront of mountaineering although much of his achievements have been forgotten largely because of the more controversial aspects of his life story and also because Crowley refused to be part of the climbing establishment which was dominated by the Alpine Club at the time.

Crowley emerged as a complex character, courageous and fearless in his climbing yet with a dark side that led him to drug addiction and a personal life that was in turmoil. It was clear to me that here was someone whose life was always balanced on that knife edge between genius and lunacy. Crowley came across to me as someone who was certainly not insane and who was making a genuine exploration of the occult in order to find a new philosophy of life.

He was brave, brilliant, charismatic and yet fatally flawed … a perfect subject for a play.

How does it feel to put yourself into Crowley’s boots and become the beast himself?

Writing a play, especially one that you intend to perform yourself, is a unique experience. On the opening night of the Fringe I found myself standing behind a curtain, listening to the audience file in, and knowing that in a few moments I would step out into the glare of the stage lights with only the words I wrote and my ability to perform them to get me through. It was terrifying and at the same time exhilarating. In the end we got some good reviews and the play was popular with audiences. Since then I’ve performed the show in different venues across the country and still perform the play at festivals.

Before I stepped on stage I used to allow some of the scenes that Crowley would have witnessed flow through my mind. I would picture myself far out in the Egyptian desert performing a magical ritual. At his house in the Highlands writing at his desk or high on a Himalayan peak. Sometimes, especially in rehearsals where there is no audience and only a handful of people present, I could sense something of a presence. I hope Uncle Al would have been happy with how I portrayed him.

Like Crowley, you are also a walker and mountaineer. Did these interests lead you to Crowley, or was it the other way round?

I didn’t realise until I was researching the play but Crowley and I have a number of ascents in common, most notably the Dente Blanche. That particular mountain has a very small summit, only the size of a table top, so he and I must have stepped on to the very same rocks at one point over half a century apart. I suppose that’s not very long when you consider just how short the history of mountaineering actually is. I think it was my interest in mountaineering that led me to Crowley, I probably would never have heard of him otherwise. He and I do have one other thing in common, we are both bad poets, unfortunately that’s a qualification shared by a lot of people. I think if Crowley could have been anything at all he would have chosen to be remembered as a great poet. Unfortunately his poetry was, for the most part, clumsy and dated in its style. I think he did have talent in that respect but, as is typical of the man, his arrogance would not allow him to listen to criticism and most of his poems sound like first drafts.

Describe your most memorable or enjoyable hill day.

In mountaineering I often find that memorable and enjoyable frequently describe different aspects of the sport. I was lucky enough to be in the Cairngorms recently, just after Easter. I’d walked in to Corrour bothy and spent the night there in glorious solitude. In the morning I was greeted by one of the most fantastic days I have ever seen in the Highlands. Bright Alpine style sunshine with iron hard névé that was a joy to walk and climb on. Walked out across an empty Cairngorms, over Cairn Toul, Angels Peak and Braeriach, in perfect conditions. It’s a long and committing walk and it had a little spice of risk to make it worth doing.

My most memorable days are perhaps different, one is being gripped out of my mind on a totally out of condition Green Gully one winter. Or lowering my friend John over a rock cliff in the dark with no belay. Or thousands of tonnes of rock and snow suddenly appearing above me on an ice climb in Canada as the whole face avalanched. I didn’t exactly enjoy those moments but they stick in the memory!Can you tell us anything about your future projects?

I’m currently working on a one man play about George Mallory, Beyond Everest. The story of Mallory and Irvine, who both vanished on Everest, is one of the most gripping in mountaineering. The question of whether they got to the top will always be a mystery that fascinates everyone. The story of the conquest of Everest is unique; it can never be repeated now all the great challenges in mountaineering have been overcome. In his era Everest climbers were national heroes and the quest for the summit gripped the nation.

I wondered what would have happened if George Mallory had not died on the mountain. If he had returned what demons would have pursued him down from the heights and tortured him in his old age? I will be telling that story in a play in the 2014 Edinburgh fringe.

I’m also writing a personal account of my life in the hills. The View from my Boots is not only about my time in the mountains it’s about the relationship we all have with wild places. I think that the hills of Britain will be empty in twenty or thirty years and that our romance with high places will have become confined to only a handful of devotees. I want to ask questions about why that is happening and what we will lose when wilderness is lost to our lives.

Tell us how we can find out more about your work.

You can come and see A Passion for Evil at the Bram Stoker festival on the 24th of October 2013 at 7.30 http://www.bramstokerfilmfestival.com/a-passion-for-evil.php

Or visit my blog at http://johndburns.wordpress.com

Check out the Fringe program for Beyond Everest next year. I’m really looking forward to producing the show.