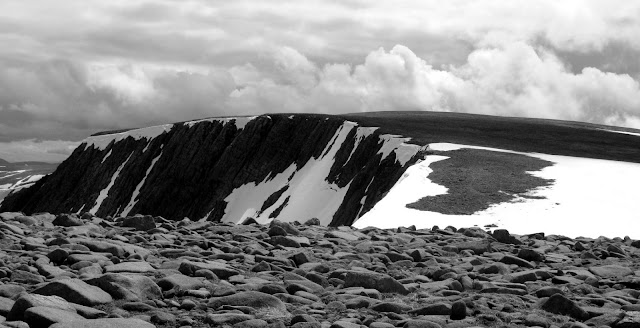 Braeriach, at 1,296m, is the third highest peak in the UK and one of special significance for me. My relationship with this enigmatic mountain goes back to November 2008, the date of my first failure to climb it (read an old Glencoe Mountaineer report of my second aborted attempt here). I finally climbed the mountain in May 2010, but it remains a crafty beast, guarded by storms, snow, and the remote inaccessibility of its location.

I climbed it a second time last Wednesday as a detour on my Blair Atholl to Aviemore trek. This time my chosen route took me up the relatively obscure East Ridge of Cairn Toul, a pleasant Grade 1 scramble.

I followed the well-marked path from Corrour up the hillside into Coire Odhar, then tracked right when the angle relented. It’s possible to approach the East Ridge directly but it’s far better to use the approach I took, crossing a rocky spur before traversing the basin of Coire an t-Saighdeir. The approach to the ridge itself is obvious from this point and aside from a few snow patches to negotiate there are no difficulties in locating the start of the route.

The ridge begins broad, easy-angled, and loose … mainly walking, although there are some small rocky outcrops to play on if the mood takes you. The ridge is never steep although it does narrow as you climb to provide some great easy scrambling. Overall the route is Grade 1 although more in the order of Striding Edge than Tryfan.

From the summit of Cairn Toul, I walked the short distance to the slightly lower peak of Sgurr an Lochan Uaine – a tremendous viewpoint suspended above the perennial snowfields of Braeriach. Although the snows were not quite as extensive as on my last visit, I spent some time soaking in the novelty of winter and summer coexisting in one baffling location. That’s the magic of the Cairngorms; they are always surprising.
When the ice age returns, this is where it will begin. A temperature drop of only a few degrees would result in these icefields turning to permanent glaciers. Already the snow patches are regarded as ‘semi permanent’, and although they shrink throughout the year, it’s very rare that they melt away completely.
Braeriach 1,296m

After climbing Sgurr an Lochan Uaine, I continued around the rim of the corries and walked up onto the summit plateau of Braeriach itself. This is a wild and desolate place where little grows. The terrain is dominated by slowly melting snowfields, ground made spongy by meltwater, and the fine gravel produced by the rock of the mountain.
The weather looks dramatic in my photos, although in truth the cloud was fleeting and patchy sunshine predominated for most of the day. I’m guilty of increasing the contrast in my pictures to accentuate the detail in the old snow formations.
The actual summit of Braeriach, when I reached it, was a dome of ice with not a single rock visible. 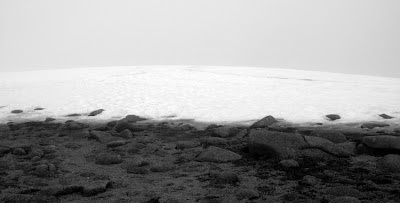 I didn’t spend long here. My return was made along the same route, to begin with at least, and thanks to the thickening mist I was obliged to navigate by map and compass. The route back to the Coire Odhar path, which drops back down to Corrour, crosses the peaks of Sgurr an Lochan Uaine and Cairn Toul. Since I had already climbed both of these mountains already that day I had no desire to do so again on my return! I picked a route contouring around both summits to avoid unnecessary re-ascent (see map above).
After flanking Cairn Toul I was treated to this rather fine view of the mountain ridge I had climbed at the start of the day: 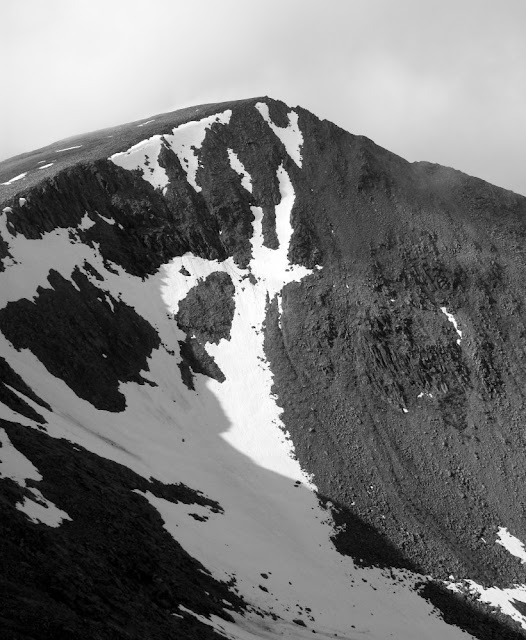 I returned to Corrour happy with a great day on the mountain. I had climbed no new Munros, but had been given the opportunity to explore a new scrambly ridge and see the mountains at their best. Any day in the Cairngorms is worthwhile, but one with both sunshine and navigationally-challenging hill fog is perhaps doubly so! 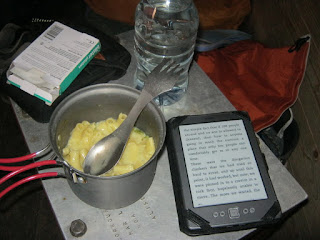