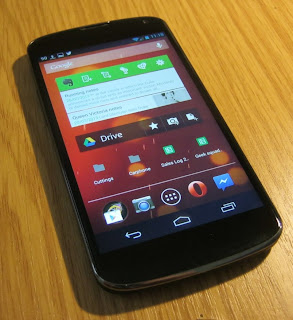 As computers diversify and specialise, many modern writers are choosing to take advantage of the greater mobility offered by tablets and smartphones. I have already written a very popular post on how writers can use tablet computers, and my guide on how to turn a Nook ST into an Android tablet has quickly become the most-read article on my blog. In this piece I’d like to take a closer look at some the Android apps I use on a daily basis to get work done. Part two will feature some of the less important (but still very useful) apps I have discovered for writers.

My machines (Nexus 7 tablet and Nexus 4 smartphone) run the latest version of Android (4.3) but these apps will work on any devices running Android 2.2 or higher.


In this article I will be taking a closer look at Google Drive, Evernote, and Draft. 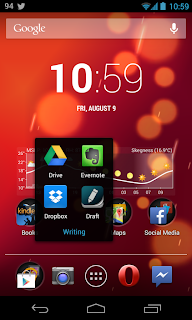 Above is the homescreen of my Nexus 4, with the ‘Writing’ folder open. It also contains Dropbox, a vital file syncing service I use to contain my draft material, but as I rarely open the Dropbox app itself I will be talking about this app in the second article of the series.

Evernote is quite simply the most useful tool for the modern writer. If this sounds like a big claim to make, the evidence is clear: it offers a comprehensive note-taking and recording platform that synchronises data between almost any device. You can structure your notes in nested folders and store a variety of data types including rich text, images, recorded sound, and scanned documents. It has been called a brain replacement app, but in my opinion what Evernote does best is simply to synchronise rich text notebooks.

Evernote is perfect for research. If you’re out and about, say exploring a setting or doing research in a library, you won’t necessarily have your laptop with you but you will almost certainly have your phone. The homescreen widget lets you create a new note or begin recording a voice memo with a single tap, and all data is saved instantly to the cloud where it can be viewed or edited from any device you own. The convenience is simply unmatched. I rarely use the voice feature (my mind seems to work in text) but it’s good to know it’s there just in case you need to record some sound.

Evernote also provides a robust desktop app for Windows and Mac OS. Here is the new Windows beta version running on my PC: 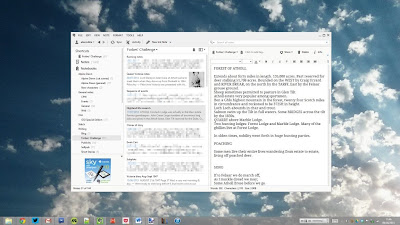 A free account allows you to upload up to 60MB worth of documents a month, which doesn’t sound like a lot but is ample for rich text plus the odd picture and audio clip. If you find yourself going over this limit then the premium service is £4 a month or £35 a year.
~ GOOGLE DRIVE ~
(Google Inc. / Free with Google account)
It’s possible to use Evernote for absolutely everything, but since non-text items tend to get attached to a text note (as it’s primarily a notebook) it isn’t quite as useful for storing photos or scanned documents. This is where the latest version of Google Drive comes in.
Google Drive is a cloud storage service available to anyone with a Google account. You get 15GB of free storage shared between your Drive, Gmail inbox, and Google+ photos, and can pay for extra storage if you need it (currently 100GB is $4.99 a month). Google Documents are not counted against your storage allowance.
Any non-text documents relating to my writing get stored in Google Drive. That includes my Cuttings folder – a huge repository of images I’ve found online, plus scans from physical media (books, maps, drawings etc). I also keep compiled versions of my books in Drive, plus cover designs, illustrations, and anything that isn’t first draft material (this is kept in Dropbox).
The Android app provides a front end to this service. You get the ability to view, edit and create Google Documents (currently word processing files and spreadsheets) plus file storage and scanning capabilities. I use the spreadsheet feature for keeping track of my sales, but for me the real ‘killer app’ of Google Drive is its excellent scanner.
Evernote also has a scanner (“page camera”), but the Google Drive one gives consistently better results and since I tend to scan and upload a lot of documents, but don’t have Evernote Premium, Google Drive wins. Plus I can upload the scans directly into the appropriate cuttings subfolder. It’s a small feature, but another way in which Google Drive can make life a little bit easier for a writer when in research mode.
~ DRAFT ~
(mvilla / £1.59 at the time of purchase)
So far we have seen how I keep notes in Evernote and miscellaneous files in Google Drive. What about the actual novel I’m working on? Why not keep that in Google Drive as well? The answer is simply that there are a lot of plain text editors out there for various platforms, but very few of them are integrated with Google Drive; the vast majority use Dropbox, the old workhouse of cloud storage platforms. I’ve been a Dropbox user for years and although they only give you 2GB of free storage this is more than enough for plain text.
Writing in plain text, then formatting later, keeps things simple and portable between devices. When writing on my Android phone or tablet I want an easy to use app with word count, the ability to change font and theme, and my files to be instantly synchronised; I don’t need any other features. Previously I have mentioned the Jota+ text editor, but recently I have discovered Draft which beats it for simplicity and ease of use.
Draft is actually a Markdown editor which can be used to create rich text, but it also works perfectly well as a plain text editor. Files are stored in Dropbox/Draft. You can also create your own subfolders. The tablet version provides a preview mode; tapping on the pencil icon opens the editing screen, which is pleasingly minimal. You also get an optional full screen mode which strips away the entire user interface, leaving you with just your text.
One feature I particularly like is the support for built-in styles. These are purely for the sake of readability and don’t affect the actual formatting of the text, but you get several colour themes (including the excellent Solarised palettes, ideal for avoiding eye strain) and several fonts. On tablets, you can specify different styles for the preview and editing screens. 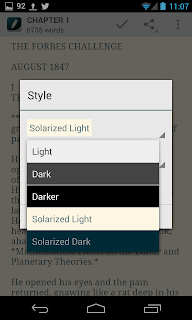 Text editing is just as usable on the smaller screen of a phone. The interface gets out of the way leaving a maximum amount of screen real estate for the keyboard and the text. 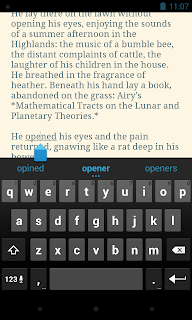 Draft has everything you need in an Android text editor without being filled to the brim with useless extra features. It’s far more user friendly than Jota+ (which is more suitable as a programmer’s text editor) and is in my opinion the best Android writing app currently available.
~
In the next article on Android apps I will cover other important apps I use on my Android devices including Pocket, Play Books, Wunderlist, and Goodreads.