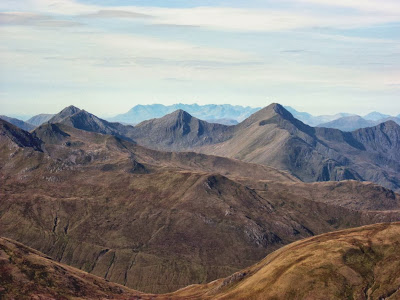 This time last week I was sitting in the public bar of the Cluanie Inn, nursing a pint of Red Cuillin and reflecting on yet another spectacular day in the mountains of Kintail. All of my trips to the mountains this year have coincided with pretty decent weather, all things considered, and this trip was no exception!

I spent a total of four days on the hill and climbed seven new Munros, taking my full tally up to 60. Perhaps more importantly, I visited a new area of the Highlands for me and spent some time with old friends. Here are some highlights from the trip.

The Five Sisters of Kintail 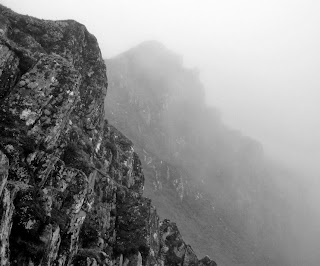 Isi and I used to climb together frequently in the old days at the Clachaig, but since going our separate ways we haven’t had many opportunities to get out on the hill. We arranged to meet at the Kintail Lodge Hotel on the first evening of my trip to plan an outing on the Five Sisters of Kintail.

This famous ridge walk is almost ten miles in length, involves almost 1,400m of ascent, and visits the summits of three Munros (Sgurr na Ciste Duibhe, Sgurr na Carnach, and Sgurr Fhuaran). It begins with a punishing grind up a steep hillside to the high Bealach an Lapain. The weather was less than perfect when we set forth, with dense cloud shrouding the tops and a persistent wind, but nevertheless the walk was a good one, full of interest and plenty of ups and downs.

Unfortunately we saw no views worth mentioning until right at the end of the route. 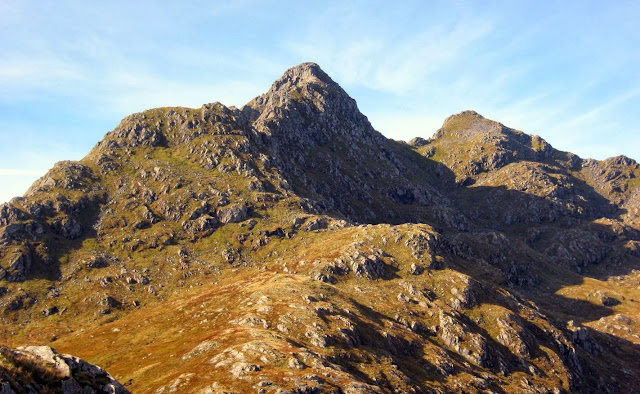 Of all the mainland ridge scrambles, one has long been near the top of my list for me to climb, and that’s the Forcan Ridge. This route is graded 2 in the scrambling spectrum, and is no pushover; although much of the climbing is straightforward, there are several optional pitches of Moderate rock climbing, including a difficult downclimb that will test most scramblers.

Fortunately the weather was absolutely flawless for my ascent. I made rapid progress to the base of the ridge thanks to the excellent stalker’s path that climbs the mountain’s lower flanks. The route begins innocently enough, with a few pitches of scrambling on good quality rock that give a taste of what is to come higher up.

The ridge is a continuous pleasure and is far longer than is initially supposed. You can’t see the entire ridge from any given point. It reveals its intricacies in stages, providing yet another “wow!” moment as you arrive on the crest of the first buttress and see the route onward. 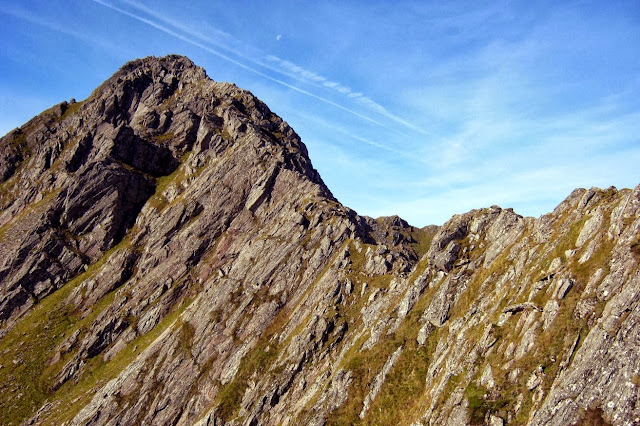 I was followed up the ridge by @Pozorvlak and friends, and when we reached the summit introductions were made – always a strange coincidence when people who have chatted online meet up by chance in the wild!

I also made friends with a tame raven who was almost brave enough to eat out of my hand.

Years ago my approach to mountaineering was very much motivated by grades, lists, and routes. If a day out didn’t involve a challenging rock climb or something I could tick off a list then I wasn’t interested. Consequently, in 2008 I probably wouldn’t have been motivated by the prospect of ascending a mountain like Beinn Fhada by its easiest route.

Thankfully nowadays my appreciation of mountains is a little more holistic and I found plenty to enjoy about this long and scenic route to the summit of a splendid Munro. The approach, through Morvich and Gleann Choinneachain, was a stunning walk in its own right through a mixture of managed woodland and semi-wild mountain pasture.

A stalker’s path led through the intricate corries of Beinn Fhada to the summit plateau. I was astonished at the scale of this mountain; it’s of a similar size and complexity to the entire Bidean massif in Glencoe, with as many cliffs and hidden corries, and yet is only a single mountain!

I was treated to constantly shifting misty views from the summit plateau.

Until the last day of my trip, all of my Glen Shiel adventures had taken place at the western extremity of the glen. I decided to get the bus down to Loch Cluanie for my last day to get a taste of the mountains at the other end of the glen.

I chose a’Chraileag and Mullach Fraoch-choire as my objectives for the day. The first part of the ascent consisted of a brutally steep grass slope rising from the road to Point 803 on the south ridge of a’Chraileag. Several other walkers were tackling the ascent with me and, given the warmth of the morning, there was a lot of standing around to “admire the view” on the way up!

The views from the summit of a’Chraileag were expansive and stunning.

The second Munro of the day, Mullach Fraoch-choire, is accessed by a rather splendid and toothy rock arete. A path bypasses most of the scrambling sections, but the sporting route is straight over the top. This would be a grand ridge in snowy conditions.

I spent a little while on the summit taking in the grand views over to Glen Affric before beginning the long descent back to the Cluanie Inn. The way back takes the boggy length of an Caorann Mor to its terminus at the main road. Thankfully in the dry conditions the bogs weren’t too severe, and I even managed to make do without putting gaiters on, but it was damp enough to tell that in wet weather this would be a hell of a slog.

So there you have it: a week exploring a totally new area of the Highlands for me, climbing some brilliant mountains in good weather and even getting a little scrambling done to sweeten the deal. For me this is what Scotland is all about and why I keep coming back year after year. I shall certainly be returning to Glen Shiel as many mountains have been left unclimbed, including the Brothers Ridge, the entire South Shiel Ridge, and many more.