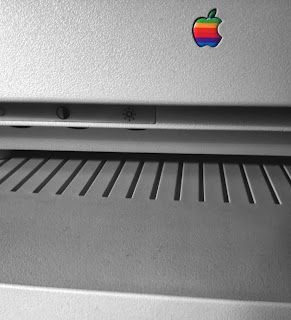 A while ago I blogged about how I believed easy Web access has eroded my ability to concentrate and to write without distractions. I reminisced about the earliest computers I had used for writing: the bare-bones SE/30, the clunky but focused PowerBook 190, the IIsi.

I decided to conduct an experiment. I resolved to find one of these old 68k Macs from the early 1990s, restore it to its former glory, and use it as my primary writing machine for a period of time. Would it improve my productivity, or would I find that rose-tinted glasses had distorted my memories of what was in reality a very limited computer?

For a writer used to operating in the technological environment of the 2010s, the challenge seems daunting at first. A “68k Mac” has, as standard, no connection to the internet, a pitifully weak processor, a tiny amount of storage, and a small, low-quality monitor. I choose to look at these qualities not as limitations, but features to aid focus when writing.

When the computer arrived I set it up and flipped the switch, not expecting it to boot. To my surprise it made the familiar Apple startup chime and booted in seconds to show the Mac OS 7.1 desktop I recognised from days of old.So, the computer worked, but after twenty years it would require some upgrades and maintenance to be useful.

Fortunately the LC475 is a flexible system, easy to upgrade. Here is the work I carried out on the system:

1. RAM upgrade from 4 to 70MB, a phenominal improvement allowing me to multitask to my heart’s content.2. Hard disk upgrade from 80MB to 73GB, split into a number of partitions.3. Installation of an Ethernet networking card.4. I also dismantled and thoroughly cleaned the keyboard that came with the machine (although I eventually replaced this keyboard with an excellent Extended Keyboard II with Alps Cream mechanical switches).

Running an antique system is not without its risks, and I’m well aware that in future all of the capacitors on the motherboard and in the power supply will need replacement as they inevitably fail. The original VGA monitor is probably also living on borrowed time.The software

I stocked the hard disk up with classic titles such as ClarisWorks, Microsoft Word 5, Transmit FTP client, and BBEdit 4.5.The last one is the program I have been using to do most of my work. BBEdit is an excellent text editor with every feature a writer could want: powerful enough for editing and proofreading, but spartan enough for distraction-free draft writing. 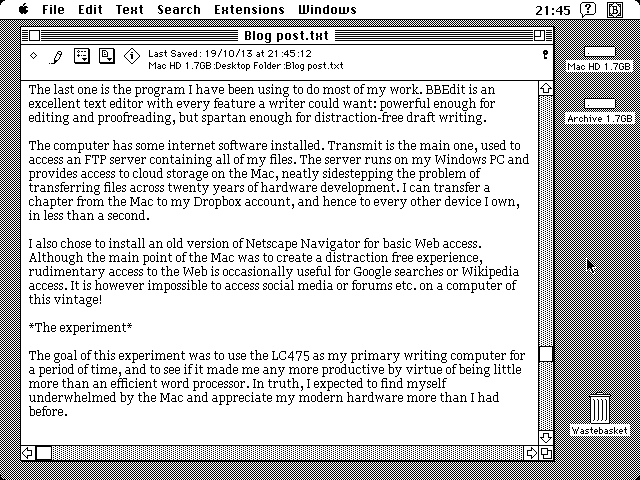 The computer has some internet software installed. Transmit is the main one, used to access an FTP server containing all of my files. The server runs on my Windows PC and provides access to cloud storage on the Mac, neatly sidestepping the problem of transferring files across twenty years of hardware development. I can transfer a chapter from the Mac to my Dropbox account, and hence to every other device I own, in less than a second.

I also chose to install an old version of Netscape Navigator for basic Web access. Although the main point of the Mac was to create a distraction free experience, rudimentary access to the Web is occasionally useful for Google searches or Wikipedia access. It is however impossible to access social media or forums etc. on a computer of this vintage!The experiment

The goal of this experiment was to use the LC475 as my primary writing computer for a period of time, and to see if it made me any more productive by virtue of being little more than an efficient word processor. In truth, I expected to find myself underwhelmed by the Mac and appreciate my modern hardware more than I had before.

If you’ve read my other post on this subject you’ll be aware that I already know my way around vintage Macs like the back of my hand, as I grew up using them. No learning curve, then … but at first it was disorienting going back to a flickery cathode ray monitor!

Getting into a good workflow with my new Mac took a few days. I had to remind myself to manually upload my work using Transmit at the end of every day, as there is no way of using Dropbox natively on a computer so old. The loud hum of the hard disk and fan was, at first, rather disconcerting compared to the deathly silence of my modern PC.

I expected to encounter pitfalls and roadblocks. I expected to find using the Mac a chore, and run back to my sleek and soulless modern PC after a matter of days. Surely a computer from twenty years ago couldn’t really be the efficient writing terminal I had long sought?

Two months into the experiment, I’m in no doubt that I have found the perfect writing computer for me. The LC475 is now my primary writing machine, and I appreciate its unique qualities more with every day.

My productivity has increased hugely. I finished the rough draft of my novel largely thanks to the increased concentration and focus achieved from working with this computer. Away from the distractions of the Web, faced with the spartan yet friendly interface of System 7, I found myself able to focus on my work for longer periods of time without being tempted away to do other things. A high quality keyboard, a text editor, a screen, and the means to access your research documents: what else does a writer need for the task of actually writing?I now view a modern PC as a swiss army knife, a jack of all trades, certainly not tuned and optimised for creative writing. In piling feature after feature into the operating system over the decades, computers have lost the charm and simplicity they once had. The last few weeks have made me understand that it’s more than just nostalgia for simpler times; these older computers are genuinely more focused and easier to use.

Of course I can’t possibly use the Mac for every task. A writer needs a modern computer with a fast internet connection for a range of tasks from cover design to research, from social media to compiling eBooks. However, I have discovered that for the act of writing itself, and possibly even editing, a barebones distraction-free computer such as the Macintosh LC475 suits me perfectly.

Is this strategy for everyone? Of course not; many writers will find such old technology alien, and in any case it requires a substantial amount of knowledge, time and experience to maintain antique hardware to a decent standard. It isn’t as simple as buying an old Mac on eBay and firing it up. The capacitors may be fried, or the hard disk will have failed; at best it will have limited life before various components start to degrade.

But if you have the skills and the time to devote to an interesting project, it might be worth trying it out for yourself. It may not suit your style at all, or you might be pleasantly surprised to discover a new and efficient way of working, free from the bright lights of the Web. 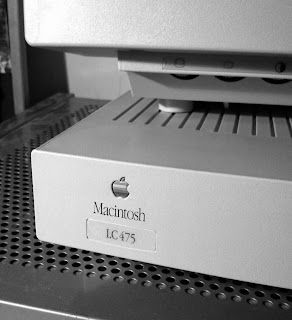