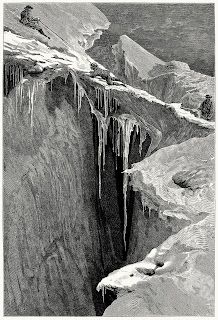 Scrambles Amongst the Alps in the years 1860-69
by Edward Whymper
This series of articles showcases gems of mountain literature, both established classics and more esoteric titles.
If you read only one book on the golden age of Alpine mountaineering, make it this one. Edward Whymper’s epic tale of his campaign in the Alps, culminating in his world famous first ascent of the Matterhorn and the disaster on the way down, is one of the best books ever written about mountaineering.
A young wood-engraver from London, Whymper was only twenty years old when he was commissioned to travel through the Alps and produce a series of drawings of Alpine scenery. He soon discovered that he was a natural climber. Intelligent but antisocial and often downright rude, he was not an easy companion to spend time with on the mountain.
This book details many of his early expeditions in addition to his Matterhorn campaign. The Matterhorn story quite rightly steals the limelight: it’s a potent combination of ambition and rivalry, numerous failures before eventual triumph and disastrous tragedy. Four of his companions perished on the descent, an event which affected Whymper for the rest of his life and caused upheaval in the fledgling mountaineering community of the era.
There is much to enjoy besides the Matterhorn in this volume. Whymper writes engagingly on early expeditions into the Dauphine Alps, the first crossings of several glacier passes, and other subjects of interest. His monologues on innovations in mountaineering equipment are particularly fascinating. The book is illustrated throughout by Whymper’s charming drawings of Alpine mountain life.

All of the Alpine golden age is here, brought to life with humour and pathos. This is arguably the best book on mountaineering to have been written in the 19th century, and an excellent starting point for someone wishing to study the subject.Reminder