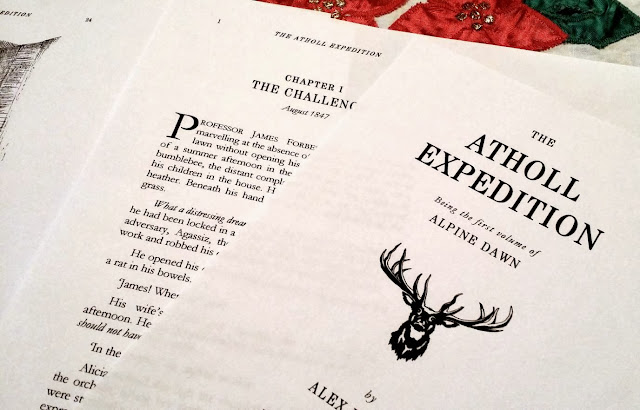 The response to my new book, The Atholl Expedition, has been overwhelming so far. It has stayed in the top fifteen mountaineering books on Kindle since it was published, briefly occupying the coveted bestseller position on Christmas Day. Plenty of readers are snapping up the book on Kindle, but to me a book never feels “finished” until it’s available as a gorgeous, physical paperback edition.

My current task is to create that paperback for my readers who prefer physical books to their digital equivalents.


One of my key missions with this paperback is to create a book that looks of its era. I want to evoke the atmosphere of the mid 19th century with every word, every chapter heading, every drop cap. That means I have to carefully select my typefaces and pay close attention to the look of little things like running heads and page numbers.

After much deliberation I have selected Garamond as my body text font. It’s an old-style serif type that was commonly used in the 19th century, and indeed remains popular today. Most Alpine books of the period used a far denser, ‘blacker’ Scotch Roman, but I will not sacrifice clear readability for period charm so I have chosen to compromise by choosing the far more legible Garamond as my body text font. The italics are also gorgeous.

Headings are another matter altogether, as they are used comparatively rarely and therefore can be tuned to more closely resemble the period style I am attempting to imitate. I have used a Century Condensed font for headings, expanding the spacing between glyphs to 1.4 points. This creates a close approximation of the headings used in most of the Alpine books of the era.

The overall result looks nothing like the paperback edition of The Only Genuine Jones, and (I hope) succeeds in evoking quite a different atmosphere: an almost claustrophobic feeling, a sense that the mountain voyageur is stepping outside the boundary of the known world and into an alien landscape. This subtle feeling can be sensed whenever one reads a book from before the golden age of Alpine exploration.

I used FeedARead to create the paperback edition of The Only Genuine Jones, and was very impressed by the process, although there was of course a learning curve (and I had a hell of a time getting my spine graphic right!) However, one of the limitations of a print on demand service is that it becomes uneconomical to offer wholesaler discounts, so it’s very difficult to get the book on sale in bricks-and-mortar stores. The paperback version of OGJ has sold moderately well but I’m aware I could have sold more copies had it been available in bookstores at key locations.

I would really, really like to get Atholl into bookstores, so I’m investigating other print on demand services that offer this option. One possibility seems to be to go directly to Lightning Source, but the process doesn’t appear to be as user friendly and there’s less margin for error. I’m still investigating; I may well end up using FeedARead again, as (other than the wholesaler discount issue) I’ve been very happy with their service so far.

Book launch or no book launch?


When I launched OGJ into the world at the Clachaig Inn in February 2013, it felt like a natural high point in my writing career and a moment of considerable triumph. The fact that it only just broke even, financially speaking, did not matter; it was something I had to do, and I’m very glad I did it.

This time it’s different. I am extremely proud of the new book I have written–in some ways more proud of it than I am of my first–but it isn’t my first book, and I have to consider financial matters more carefully if I am to make a serious business of my writing. I would very much like this book to generate more profit for me than the last one, and I’m well aware that a book launch party is something of a luxury these days.

Also there’s the matter of timing. I want to launch the paperback as soon as possible, and that doesn’t leave me with much time to plan and book a launch event. I’m working full time hours at my day job at the moment and most of my holiday allowance for the year is already accounted for. I work in a small team, and getting extra time off is simply impossible.

On balance I don’t think a book launch event is going to happen this time, although I am keen to do more signings and talks in my local area (something I neglected with my first book due to the strong Scottish connection).