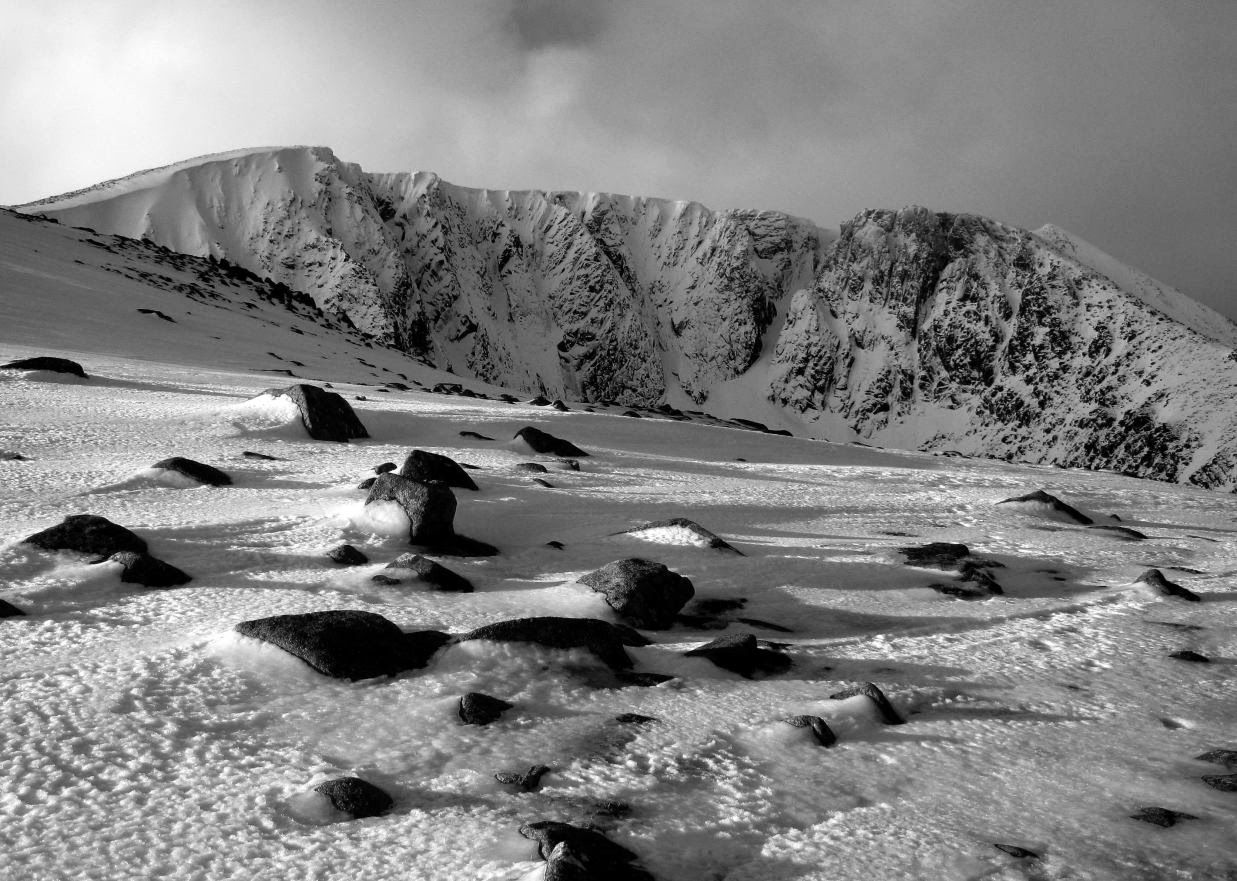 Wham! The gust of wind punched me in the chest, lifted me off my feet, and hurled me twenty feet back through the air to land, dazed, on a snowbank. I struggled to get up again but the force of the wind was relentless, pushing me back step by step, crushing me to the ground.

I had never experienced wind like it: ferocious, elemental, irresistible. When I saw “gusts to 60mph” in the forecast I thought I could handle it, but faced with an exposed climb ahead I couldn’t risk being blown off my feet a second time. It was galling to turn back less than 200m from the summit, but I had no choice.


The plan had been simple enough: get the bus to Crathie, walk to the Gelder Shiel bothy where I would spend the night, and climb Lochnagar the next day. Unfortunately things started going wrong almost from the very start.

My train was late at Grantham, which caused a knock-on effect resulting in massive delays later on in the journey. I missed the last bus from Aberdeen to Deeside, so had to stay in the Aberdeen youth hostel overnight. When I arrived at Crathie the next morning, I spent several hours scouting out the Balmoral estate.


The Balmoral estate will be a primary setting for Alpine Dawn Book II – as yet unnamed, but set in 1848 and 1849. A big reason for going on this trip at all was to conduct some field research and get a feel for the area myself.


My first discovery was that it’s virtually impossible to actually see Balmoral castle from anywhere! The trees have grown up a great deal, and I couldn’t even see a glimpse of the turrets from the top of the nearby hill (or from the other side of the river Dee). Happily, this is of no importance to me as the modern castle bears no resemblance to the building that would have existed in 1848. The first castle was demolished in the 1850s as it was too small for the Royal household.

I did, however, make some useful discoveries. The current kirk dates from 1895, and replaces an earlier building constructed in 1804. The head keeper of Balmoral in 1848, a man named Grant who had six sons, lived in a cottage a mile from the castle with a good view of Lochnagar. Victoria, Albert and their children built a number of cairns on the hillside in commemoration of their purchase of the Balmoral freehold in 1852 (until this point they had the castle and estate on lease from Lord Aberdeen).

I walked up to find Victoria’s cairn and was treated to a spectacular view as I came upon it:

I have come to know Victoria and Albert quite well over the last year as they are major characters in The Atholl Expedition and shall certainly be returning in the next book. Far from the conventional, stuffy figures most people call to mind when they think of Victorian royalty, these people were actually fascinating characters who did a huge amount of good in their lifetimes. They also had many positive qualities, including a genuine concern for the lives and wellbeing of their servants.

My books don’t take sides when it comes to the class warfare of the 19th century. My job as author is to show the story from all possible sides, which is why in The Atholl Expedition I picked characters from every possible level of the social spectrum. All of these people have qualities both good and bad. Some may criticise me for portraying the Royal couple in a positive light, perhaps wishing that I had instead pursued some political or social agenda in my novels, but I see no need to take sides in a war that is no longer being fought (or, at least, no longer being fought in the same way or on the same fronts). 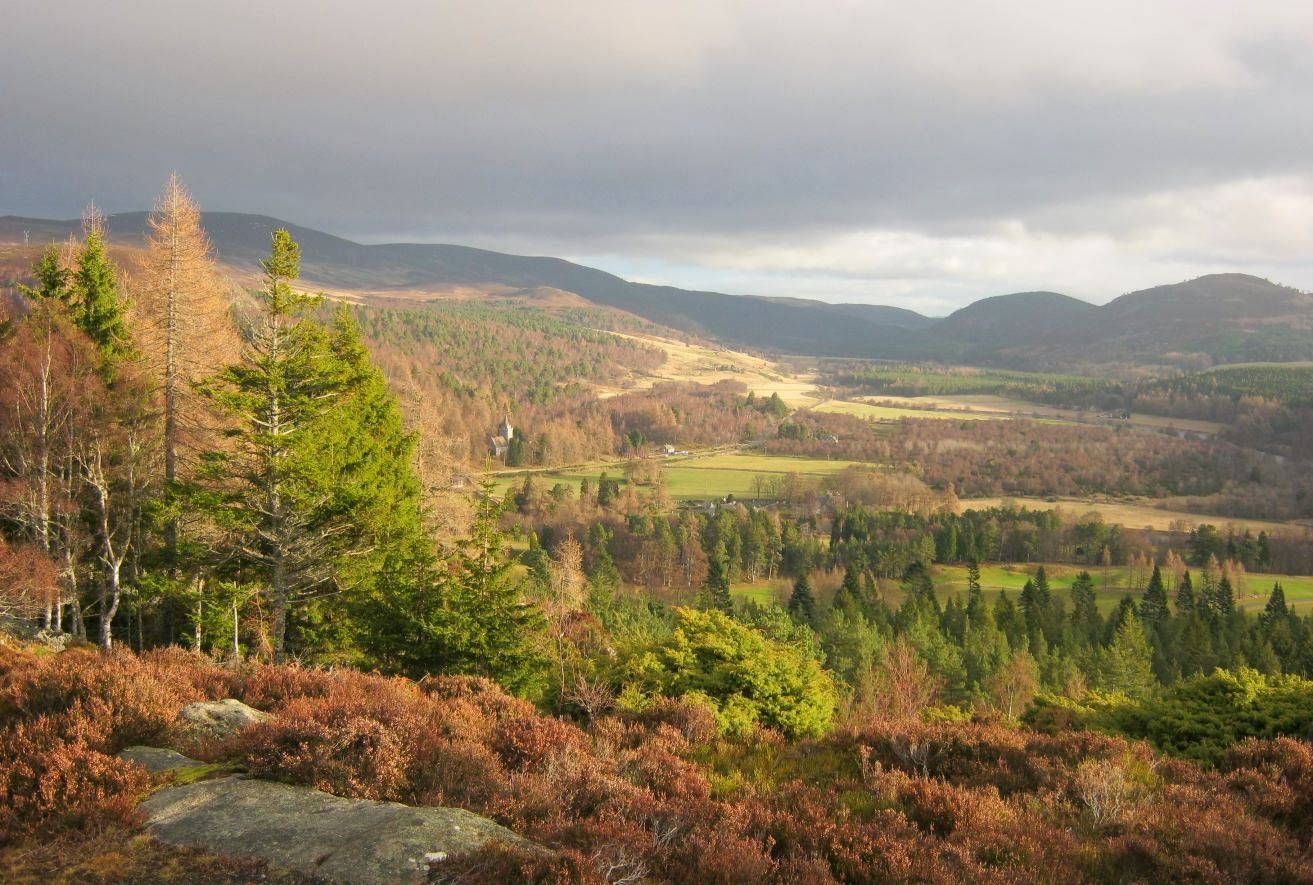 I stood for a few minutes on the high prow of rock where Victoria and Albert first looked out on the estate they had purchased, and I don’t mind telling you it was quite a touching moment for me. They found such happiness in their visits to Blair Atholl, but it was always at the sufferance of the true owner (the 6th Duke of Atholl). In Balmoral they were finally able to create a miniature world all of their own. They also did a lot of good in the local area, providing employment, improving infrastructure, and boosting the economy.

After exploring Balmoral I walked to Gelder Shiel in increasingly strong winds; however, the weather was otherwise good and, despite the forecast, I convinced myself that the next day would be acceptable for climbing.

Gelder Shiel is a comfortable little bothy and I spent about 15 hours there in total. Once unpacked, I spent a fair bit of time writing up notes from my research I’d carried out in the Balmoral estate, and fleshing out ideas for my next book.


I started the walk-in to Lochnagar just before dawn. It felt pretty windy in Glen Gelder but I was confident things would improve later on. The sky was clear and I was treated to some absolutely stunning cloud and light effects as the sun rose.

A well-constructed (even perhaps a little obtrusive) track cuts through the reserve and eases the initial walk-in, but after the first mile much of the track was drifted over with snow of varying thickness and quality. It hadn’t really got below freezing overnight at this altitude so the breakable crust on the snow was rarely strong enough to hold my weight, and consequently travel was far more laborious than I had expected.

I broke away from the track and began the ascent of Lochnagar, cutting up behind Meikle Pap to reach the col on the NE Ridge. I had already decided against climbing any of the gullies as I had seen avalanche debris from as far away as the hut. Freezing level was at about 900m but windchill was at least -10 or -15 at that altitude.

Soon forward progress was a real battle and I was constantly having to stop and lean against my alpenstock to avoid being blown backwards. As I approached the col I got hit by some monster gusts, far in excess of 60mph in my opinion, and when I finally got blown over (while on the steep slope above the col) I decided enough was enough.

The prospect of getting bowled off that ridge by another gust was not an appealing one, given the huge drops on either side, so at about 1000m altitude I reluctantly decided to turn back: a decision made all the more galling by the gorgeous blue skies.

Back at the bothy, I collected my sleeping kit and began the tramp back to the road. My original plan at this point was to catch a bus up the glen and sleep overnight at the Slugain Howff before making an attempt on Beinn a’Bhuird the next day (taking advantage of a weather window). However, it was dark by the time I jumped on board the bus, and given the fact that the Slugain Howff is both secret and exceptionally well-hidden, I didn’t much fancy my chances of finding it in the dark! A friend had told me the approximate location, but I’d never been there before. I decided to find accomodation in Braemar.

Remarkably, all three hostels in Braemar were closed so I was obliged to take a room at the Fife Arms Hotel.


With several days left until I had to go home, you’d have thought I would have jumped at the chance to explore some more areas and climb some more mountains. However, all the mountains accessible from Braemar are big days, usually requiring a stay at a bothy, and the forecast from Friday onwards was pretty bad – I didn’t fancy being blown off another mountain. I considered doing one of the smaller hills, but to be honest that would have meant staying another night at the hotel, and I had started to feel a little apathetic about the entire trip. I suppose my failure on Lochnagar disheartened me a little.

My research work – the main reason for coming in the first place – was done; I had been beaten by Lochnagar, the mountain I really wanted to climb; any other objectives were purely secondary. I decided to return home on the first train the next morning.

Despite my failure to climb any mountains at all, this has actually been a very successful trip. I’ve done a lot of highly useful field research, and perhaps more importantly, my sojourn at Gelder Shiel allowed me some thinking space and I have already planned out about half of my next book… 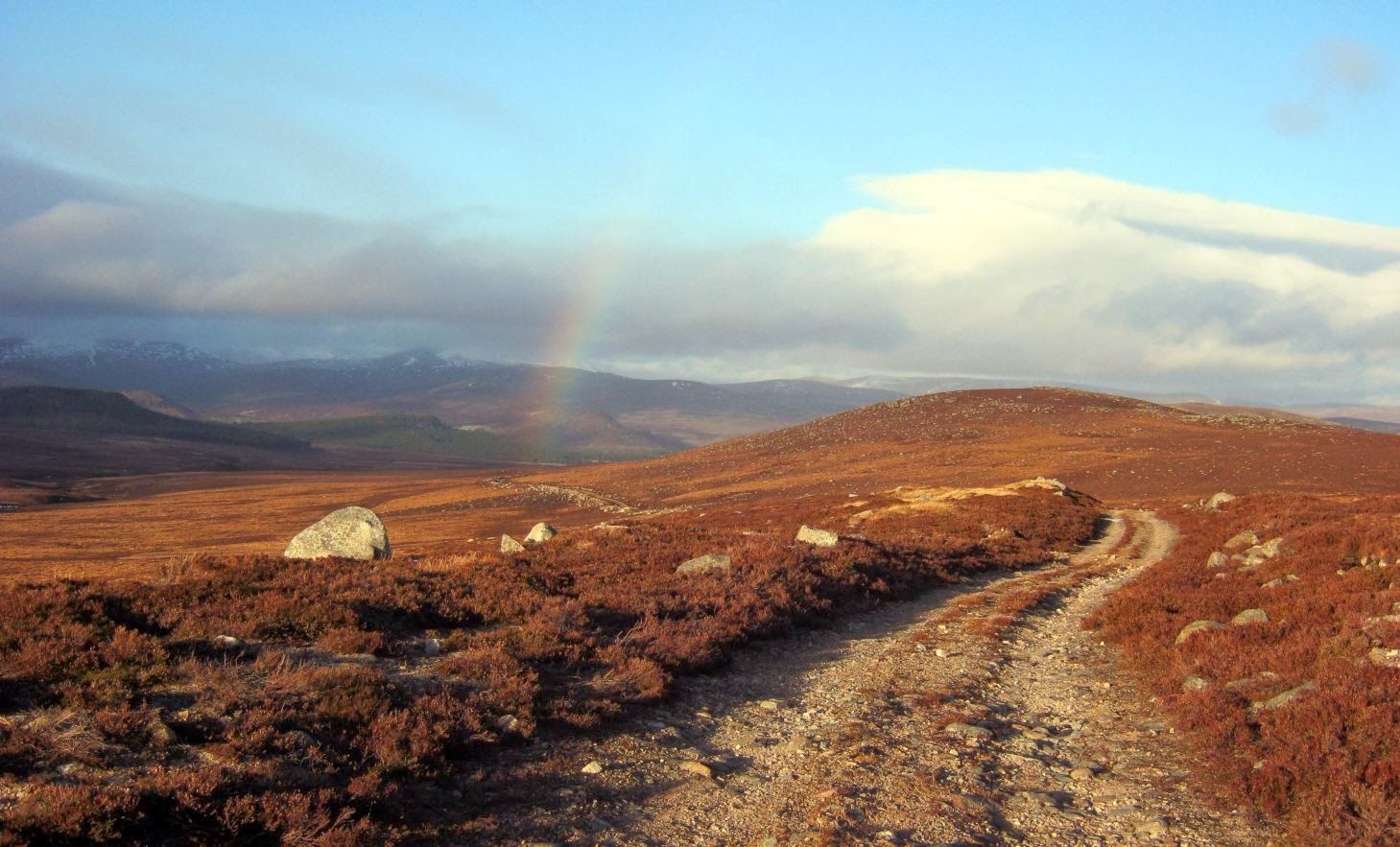