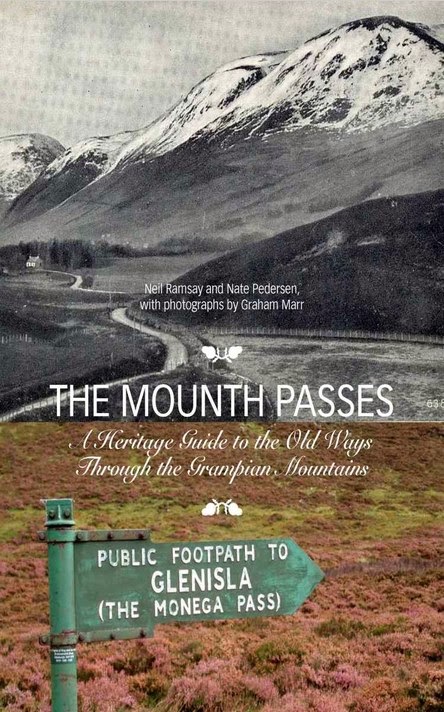 The Mounth Passes:
A Heritage Guide to the Old Ways through the Grampian Mountains
by Neil Ramsay and Nate Pedersen
(Kindle)

This slim ebook came to my attention through the Scotways Twitter account. Scotways is one of the oldest outdoor access organisations in the country, established in 1845 to help fight for rights of way through the Scottish countryside. The authors, Neil Ramsay and Nate Pedersen, are both involved with the Heritage Paths Project.
My first impressions of this book were very good. The cover is attractive and the book includes a large number of colour photographs (plus a map) to illustrate the various routes. The introduction gives the reader a grounding in the etymology of the word “Mounth,” a term originating from the Gaelic monadh. These mountain passes connected distinct glens, usually over high ground but following weaknesses in the landscape, and were often used for cattle droving in past centuries. Several of the roads were perilous in winter before the widespread use of modern clothing, maps, or equipment, and have claimed many lives over the years. Today some of the passes are still in use while others have faded into obscurity.
Twelve Mounth passes are described, mainly in Aberdeenshire, and each road gets its own chapter with an overview of the history and folklore plus a survey of the route. I found the historical details particularly fascinating and I think the authors do a great job of analysing the changing nature of the Scottish landscape and how forces both human and natural can shape these passes.
The “survey” sections tend to contain the most photos and actually act like mini walking guides, aiding the curious reader in following these old paths.
This is an authoritative compact guide and the authors clearly have a great deal of expertise in the subject. Recommended for those with an interest in the history of Scotland.
~ FIND OUT MORE ~