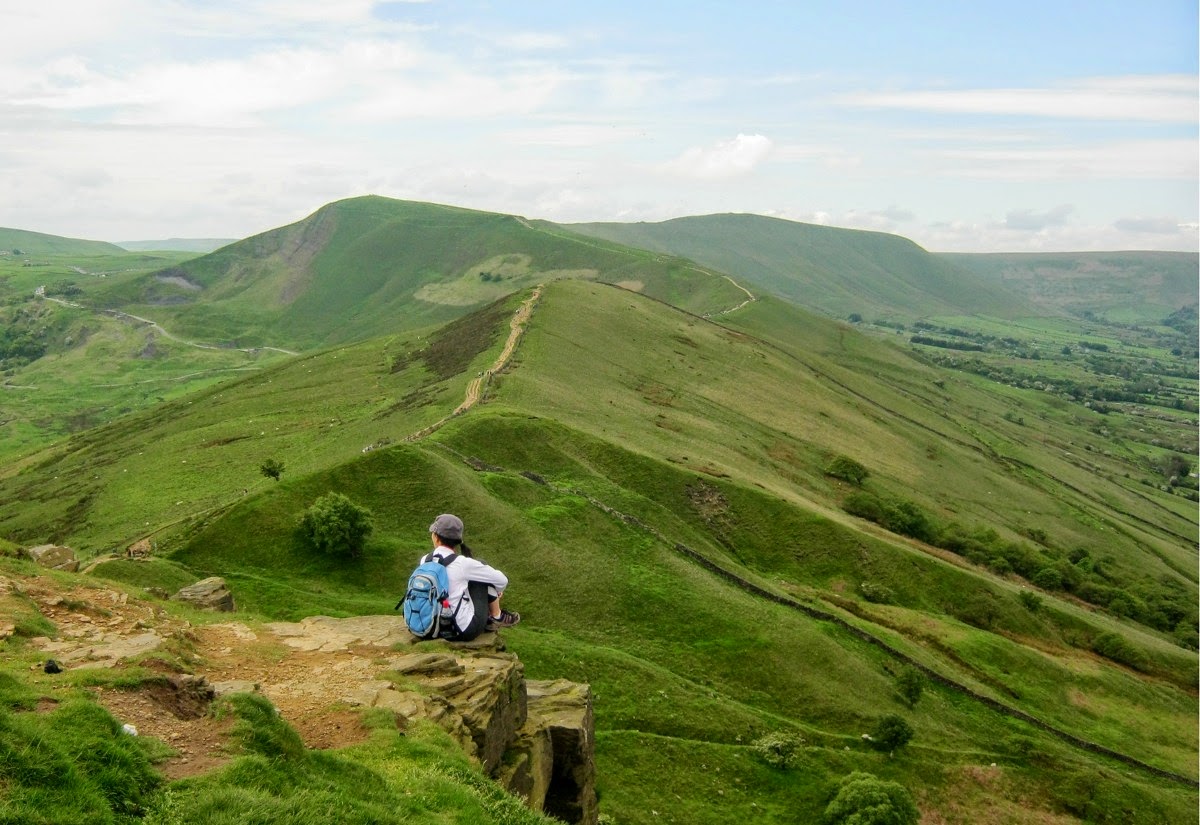 I try to balance three driving forces in my life: writing, work (the “day job that pays the bills” kind), and the outdoors. Unfortunately, 2014 has been unbalanced so far, with the day job gobbling up far too much of my time. I’ve tried my best to keep writing, but my precious moments in the mountains have been severely curtailed. Since my aborted January trip to the Balmoral area I haven’t had time to organise another trip to the mountains.

This week my partner Hannah and I decided to head to the Peak District to work on getting the balance right.

Out of all the mountainous areas of the British Isles, the Peak is the one closest to where I live — and yet the one I have visited the least. My only other visit to date was all the way back in 2007, when I attended a navigation course on Kinder Scout with the UEA Fell Club. It was a brief trip but I have fond memories of drinking in the Old Nag’s Head (which I tend to think of as the English version of the Clachaig) and challenging compass work on the Kinder plateau.

It was interesting to revisit Edale after an absence of seven years. I’ve spent a lot of time in Scotland since then, and the hills don’t look as big as they did the first time I was here … but the point of this trip wasn’t to tick off major peaks or do something heroic — it was simply to have a good time in a gorgeous natural setting.
On Monday, Hannah and I met up with my brother James, and his girlfriend Nicole, to do a walk over the Great Ridge of Edale. This fine ridge is not quite of the same stature as similarly-named features in Scotland, but the individual summits are beautifully defined and the views are extensive.

We began by walking up the grassy slopes SE of Backtor Farm. This is a lovely walk, made special by its relatively unfrequented nature and the beauty of the scenery both distant and close at hand. We reached the ridge itself after a stroll of about forty five minutes.

Being Bank Holiday Monday, the ridge was packed with walkers, runners, mountain bikers — a mass of people of all kinds. I often find this objectionable on a hill but it seemed somehow appropriate that so many others were up there enjoying the views with us.

We nipped up Back Tor for the view from the top before striding the long whaleback form of the ridge towards Mam Tor.

Mam Tor is the highlight of the Great Ridge and has been used as an ancient settlement, hill fort, and more recently as a quarry. We reached the summit easily enough and spent a little while on the summit, taking in the views and watching the paragliders sailing overhead.

It may be a diminutive top by my usual standards, at a mere 517m (less than half the height of some Glencoe summits) but getting to the top of Mam Tor meant something to me. Why? It’s the first hill I’ve climbed this year, and in the drop down to Edale I saw an echo of the wilder, more fearsome summit views I know and love in the Highlands. More importantly, this is actually the first proper hill I’ve climbed with Hannah, who is a strong walker but doesn’t get the opportunity to visit the hills as often as I do. And to enjoy the day with James and Nicole as well was doubly rewarding. We don’t get the chance to see them anywhere near as often as I would like.

I’ve been hillwalking and climbing for a decade now. I’ve come to realise that the less frequently I get the chance to stand on the summit of a mountain, the more precious each moment becomes.