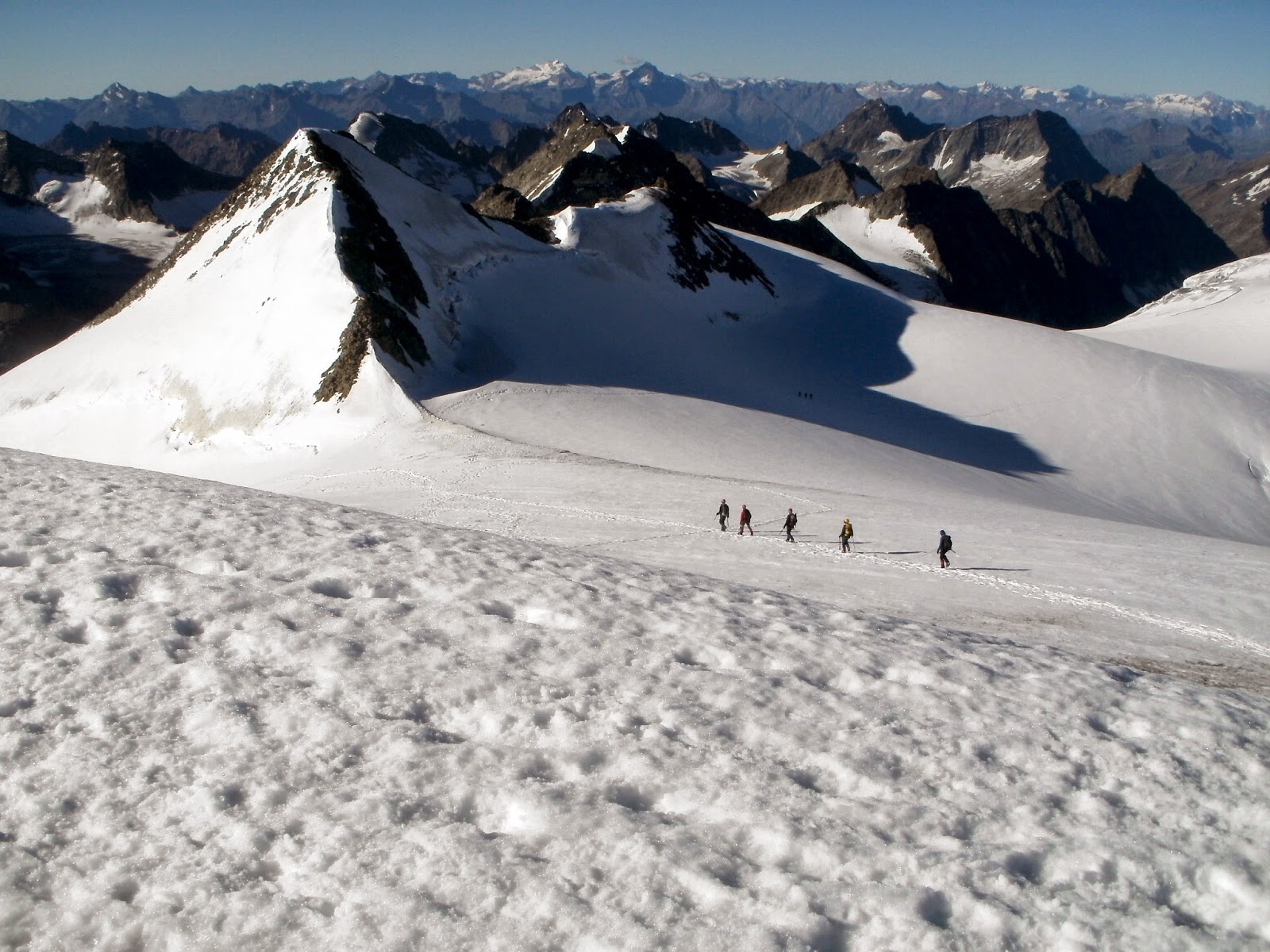 My blog has been far too quiet this year, and that’s a reflection on the fact that the day job has been occupying more of my time, and (as I recently lamented) I have been able to enjoy fewer trips to the mountains.

However, that is about to change.

Between 2007 and 2010 I visited the Alps three times. It was a natural progression from my mountaineering in Scotland, and my trips (usually accompanied by James) had a focus on getting to the top of big peaks. We had some stunning days out — quite literally high points in my life, the most notable being the moment we stood on the west summit of Lyskamm at 4,479m above sea level.

The ice world is completely unlike anywhere else I’ve ever been. It’s a place of ferocious heat and cold, low oxygen levels, harsh light, and skies a far deeper shade of blue than anything experienced on the surface of the earth. Everything is exaggerated. Timekeeping and a lightweight pack are critical to the preservation of life.

My climbs in the Alps changed my thinking forever and directly spawned the books I continue to work on to this day. Unfortunately, since 2010 I have been unable to return due to work commitments.

I booked a week of holiday at the end of June, and my original plan was to return to the Cairngorms and do a bit of backpacking. However, something made me change my mind and look a bit further afield for my adventure.

The Voyage of Professor Forbes


In 1842, Professor James Forbes (a main character in The Atholl Expedition) conducted a grand voyage throughout the Western Alps. One of the earliest British explorers to turn a critical and scientific eye on the ice world, his achievements that year included laying the foundation of modern glaciology and a pioneering survey that rewrote the map of Savoy (now part of Switzerland, Italy, and France). His writeup of that momentous summer can be read today in the form of Travels Through the Alps of Savoy and Other Parts of the Pennine Chain.

Travels is one of the first pieces of truly engaging British literature from the dawn of the Alpine golden age. Its tone, which reads more like a story than a travel narrative (although it has been compared with an epic poem) was widely imitated by other Alpine classics and echoes of Forbes’ voice can be detected in the works of Whymper, Mummery, and Stephen.

I have wanted to follow his grand journey for years, and now I have found the opportunity to replicate a small portion of his route.

My route of choice


On the 29th of June I will fly from Heathrow to Geneva, travel to Aosta, and begin my backpacking route. I plan to walk the length of the Valpelline, cross the Col Collon and descend the Haute Glacier d’Arolla to Arolla itself. My journey will end at Evolene, the ancient capital of the Val d’Herens. The total length is about 40 miles, and I’ve allowed myself five days to do it, which should permit a leisurely pace with plenty of time to take in the scenery and climb a mountain or two on the way.

This section of Travels Through the Alps is one of the most memorable, in my opinion. When Forbes stood on the Col Collon with his companions he discovered the skeleton of a traveller in the snow. Surrounded by such remote grandeur, he was moved to write a few lines on the awesome nature of the landscape.

“… we turned and surveyed, with a stronger sense of sublimity than before, the desolation by which we were surrounded, and became still more sensible of our isolation from human dwellings, human help, and human sympathy — our loneliness with nature, and, as it were, the more immediate presence of God. At such moments all refinements of sentiment are forgotten; religion or superstition may tinge the reflections of one or another, but, at the bottom, all think and feel alike. We are men, and we stand in the chamber of death.”

I think this passage reflects the views of a vanishing age in the history of Alpinism. By 1842 the golden age of mountaineering was only a decade away, modern maps were being drawn, travellers were starting to penetrate the deeper valleys, and the Alps would not remain a fearful realm of ghosts and demons for much longer. Today there is a C.A.I hut just beneath the Col Collon and it is a popular route with hikers, but I shall try to see an echo of the old Alps as I follow in the footsteps of James Forbes.