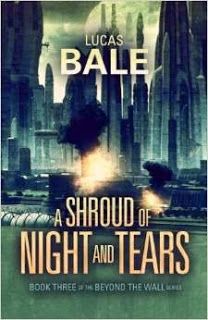 A Shroud of Night and Tears
(Beyond the Wall, Book 3)
by Lucas Bale

Over the past year or so, it’s been my privilege to follow the career of science fiction writer Lucas Bale. In my review of The Heretic, his first novel, I concluded by saying that “… I suspect this new author will go far.” I wrote those words in July 2014. Since then he has released another novel, several short stories, curated an anthology (and contributed to others), and we’ve worked together on a number of projects.

The third novel in his epic Beyond the Wall series, A Shroud of Night and Tears, launches on Wednesday (Facebook launch party here). As usual, the author sent me an advance copy of the book to read and review.

In my review of Defiance I mentioned that Lucas Bale’s science fiction world was really beginning to flower and unfold – that a sense of the true scale of his vision was starting to become apparent. This process reaches its apex in the third volume of Beyond the Wall. Cataclysmic plot twists will make you question everything you think you know about this universe, and both the stakes, and the sheer scale of events taking place, are so much higher than ever before. This is a world of stupefying danger for anyone who chooses to go against the status quo. And humanity’s place in this universe is more precarious than ever before.

Readers who may have been disappointed that the characters in The Heretic did not return in book two will be glad to hear that Shepherd, Jordi, the Soteria, and other characters from the first novel all play significant roles here. It’s really satisfying to see how their individual struggles fit into the big plot that takes place over multiple books. Some great new characters are introduced, too. Everyone has their own private war to fight, and just when you think you know what’s going on, the big twist comes along and changes everything. I’m not at liberty to give the game away – you’ll have to read the book to find out for yourself!

It’s probably apparent by this stage that I loved this book. I like Lucas Bale’s characters, I like the universe he’s weaving, and the themes he chooses to pursue in his science fiction are fascinating to me. Better still, this is by no means the final chapter of Beyond the Wall; in many ways the story has only just begin.

Each book has been a little grander, a little more ambitious than the last. A Shroud of Night and Tears is the most epic yet and the author pulls off a complex storyline with considerable skill. If you have yet to discover this author, check out the links below. His short fiction is also well worth reading.

Disclaimer: I received a free review copy of this book from the author.


Now on to what is in many ways the main event of this blog post. I got in touch with Lucas and asked him a few questions about his work. In this interview he casts a little light on the themes he explores in fiction, the nature and future of civilisation, and his future plans for the series.

Each volume of ‘Beyond the Wall’ has shown us a little more of the context and wider world in which your stories are set. In ‘Shroud’ the reader is shown a glimpse of what’s really going on. Are there more big surprises in store for us in future books – and if so, what can you tell us about them?

I think any story needs to contain surprises in order for it to be compelling. Robert McKee taught me that. That gap between the reader’s expectations and the actual result is one of the most enthralling aspects of any story. We love to be surprised, for stories to take unexpected turns. So yes, there are more revelations to come. Obviously there are major events that hammer out the stakes clearly in Shroud, but that was always my intention – the first two books would set up two separate storylines that would converge in Shroud and the truth of the story would be revealed. When they have finished Shroud, readers will realise there is a much greater depth and scope to the setting than at first assumed by those comparing it to, say, Firefly.

Whilst I enjoyed the light nods I made to Firefly in the first book, and there were some to the original Battlestar Galactica series too, they were never meant to continue into Defiance and beyond. The setting is much more expansive, and very different. The themes to come are different too – humanity being the main one: who we are, what we want from our future, what it means to be human and our place in the universe. Is there such a thing as ‘humanity’, or is what we consider humanity in truth a set of shared values which is really a measure of sentience or sapience instead? Shroud is a much bigger book than the first, at 465 pages, and Into A Silent Darkness will be bigger still as the story truly unfolds. This gives me a much greater scope to explore these questions.

The story of Beyond the Wall can be seen as the story of civilisation – and the threats that face it, both from outside and from within. When humanity reaches for the stars, how do you think our civilisation will adapt – and do you think a future collapse is inevitable?

The twinned concepts of civilisation and government have always been critical to the themes underpinning the series as a whole. I wanted to explore the question of what system of government was perfect for a given civilisation – and whether it was even possible to answer that question. Are there too many competing interests in a civilisation to actually find a system that could be considered ‘perfect’, or will there always be a large portion of society that is negatively affected by any given system? Certainly, democracy has much to behove it, and in many ways there is no better system. Churchill once said, in a House of Commons speech on November 11th, 1947, “Democracy is the worst form of government, except for all those other forms that have been tried from time to time.” There’s a double-sided truth to that – democracy is flawed (Churchill said that having just won the war, but having lost the general election that followed it), but, in our circumstances as they exist now, there is probably no better system.

The same might not be said for the position in the Beyond the Wall universe – humanity is on its last legs, almost extinct, and trying to rebuild. An authoritarian government seeking to propagate humanity must make hard decisions. Yet they’re not altruistic either – power corrupts, as the old adage goes, and the Quorum of the Consulate Magistratus is no exception to that. In fact, perhaps they define it. And who knows what threats wait in the shadows – a government knows a great deal more of the threats it faces, and regimes or systems of law that might seem harsh are infinitely more explicable with that guarded knowledge.

Beyond the Wall certainly explores that. Perhaps there is a didactic element to it – or more likely I just want people to ask their own questions. Science fiction is not intended to answer questions, but it should seek to raise them in the first place.

As to where we will be when we reach the stars and colonise new planets – it will depend on where the nations of Earth are at the time, as well as who goes to colonise. A US government will be a very different regime to a Chinese or Russian. A lot will also depend on the nature of the planets – the harshness of the wilderness we find and how easy it is to live there. I find it hard to believe that it will be easy to maintain law and order in the same way on a fully fledged colonial community on another planet (as opposed to, say, a closed, self-contained professional community of astronauts and scientists) as it would be here on Earth – picture the lawlessness of the Wild West and even remote (or war-torn) parts of the world now. I think the frontier mentality will become ever more important in those communities and the ability to protect one’s home will actually be critical. The only alternative is a considerably more authoritarian regime than we are used to on Earth.

The response to your first two novels has been phenomenal. Has the reaction from your audience shaped the process of writing Shroud, and if so, how?

Audience reaction hasn’t so much shaped the story itself – that was set the moment I began planning the series back in 2013. It has however made writing Shroud considerably more challenging and stressful. Although I think every author hopes that their work will break out, when more and more readers do in fact connect with your work, it increases the pressure to make every word sing. It’s inevitable that you begin to question more, especially in the later stages, and, with a book like Shroud, where the revelations are potentially surprising and controversial, there are days when that pressure exerts itself more openly than others! It’s important to believe in the work, believe in your process and remain focused on the themes underpinning the story. I don’t normally respond to reviews, but I did post on my website at one point when a number of reviewers complained about the change of characters between The Heretic and Defiance. I took the opportunity to quash a few assumptions, and to reassure too.

I have a plan – a structure for the series – and there is sense to it, reasoning behind telling the story the way that I have. But the truth is, negative reviews can break a new author so they matter. They hurt. So often I turn to Kameron Hurley’s blog and I get refreshed by her brutal honesty about the creative process and about publishing in general. Now, with a year writing and publishing behind me, I think the most important thing is to focus on the success of the books, the readers emailing me telling me they can’t wait for the next instalment, or commending the work. I suspect more experienced authors no longer need that affirmation, but sometimes it’s nice to know that you’re hitting the right notes when you’re just starting out. I write more, I read more, I learn more. I ensure I infuse every page with what I hope keeps people reading – a great story. Keeping that focus pulls me out of the low points.

Many thanks to Lucas Bale for sharing his thoughts with us today. Don’t forget, the book comes out on Wednesday. Keep an eye on the Facebook launch page for more details.