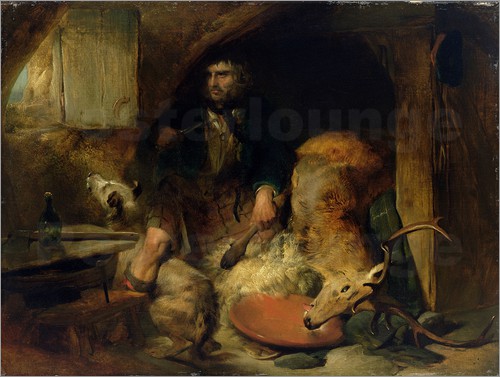 Victoria wondered when Albert would be back from his hunt. In the early years of their marriage she had sulked when he spent time apart, but gradually she had come to realise that he needed these interludes of private time away from his family. Their fights had been ferocious in those first couple of years as he struggled to settle into a new life as prince of a foreign land. Victoria’s world had been a succession of parties and balls, of staying up until dawn, of revelling in London society. It had taken time for Albert’s calmer influence and love of the natural world to tame her wild spirit a little.

Seven years and five children later, their relationship was more harmonious and Victoria had learned to be a little less selfish and a little more giving. In his turn, Albert had stopped fighting her in political matters and had found his place as a reforming influence and champion for the poor.

Nevertheless, his hunting trips rarely lasted longer than a few hours. She had missed him this afternoon, and worried that he would not be back in time for the birthday celebrations she had organised.

The Duke of Atholl returned late that evening from his hunt, but Albert did not accompany him.

Victoria had spent the afternoon painting while her children played in the garden or amused themselves by running around the vast interior of the house, watched over by the nannies of course. She had found herself a convenient window facing north east, towards the peak of Carn Liath which she had noticed on the drive from Ardverikie. The rain had cleared away an hour ago and the light lent itself more favourably to landscape painting, although the remarkable effect of sunbeam and rain failed to recreate itself for her convenience. As always, the process of applying paint to paper calmed her racing mind and helped her to relax.

She saw the Duke’s carriage draw up in the courtyard outside the front of the castle. The pony was splattered with mud from its hooves to the crown of its head, and every man in the party seemed to be similarly befouled by the Scottish weather. Victoria counted only four men in the group but could see no trace of Albert.

Where could he be? What if some disaster has befallen him?

She rushed down the grand staircase, a square spiral of vast proportion watched over by the portraits of dead ancestors. Guards from the Atholl Highlanders stood to attention at every landing and gallery, and as her skirts whispered over the floorboards of the entrance hall a maid turned hurriedly to face the wall, feather duster in hand.

‘Don’t turn away from me, girl! Where is the butler?’

The girl turned, blushing furiously, and mumbled something unintelligible. The Queen guessed the lady of this house must treat her servants in rather an old fashioned way.

The butler arrived of his own accord, bowed deeply to Victoria–she could all but hear his elderly knees creak–and scolded the chambermaid.

‘The hunting party has returned, your Majesty, although I fear without a single hart to show for their labours.’

He bowed again and did as commanded. The front door of the castle swung open with a theatrical groan of old hinges, and on the other side Victoria saw the silhouettes of two guards keeping vigil beneath the cornice.

The Queen swept down the steps and out into the courtyard, closely followed by Samson and one of his footmen.

One of the Duke’s foresters, an elderly fellow who walked with a stooped posture, was engaged with the task of emptying the wagon of provisions and seeing to the fatigued pony. The Duke stood to one side, looking back towards the mountains with a far-off expression in his face while Albert’s senior Jaeger held a stranger at gunpoint. The man looked perfectly miserable–a sorry specimen of humanity–and yet something in his features was familiar to Victoria.

The man took a step towards the Queen and lifted a hand as if to point, but Isaac stopped him with a twitch of his rifle barrel.

The Duke turned to look at Victoria. He offered a stiff smile; gone was the confidence and hope of the previous day, to be replaced by a sort of hesitant terror. Victoria guessed he was afraid of ruining his golden opportunity.

‘Your Majesty, I regret that I do not bring your husband back to you tonight.’

‘Where is he, Glenlyon?’ she snapped, forgetting his new title in her agitation.

‘He has taken one of his Jaegers and two of my ghillies north into the Forest of Mar. They pursue the champion hart, who was frightened away by some poachers.’

‘Blackguards, your Majesty. The Prince assured me that if he catches them they will be severely punished.’

Victoria scowled. She was not amused by her husband’s antics. Albert knew very well that he was expected back this evening, and it was most unkind of him to spend a night out in the mountains away from his family. In an attempt to direct her peevishness away from the Duke (who was in truth not at fault here) she took a moment to study the prisoner they had brought back with them from Glen Tilt.

‘Who is this man?’ she demanded of Isaac, who held his rifle in a loose grip at his waist while he smoked a pipe.

The Jaeger clicked his heels together and bowed crisply.  ‘Meine Königin, he is an accomplice of the devils mentioned by my lord Duke.’

The impression of familiarity strengthened as Victoria studied the prisoner. He was dressed in bedraggled travelling clothes and muddy boots, and to outward appearance was every inch a member of that nomadic class of scoundrels who wander from estate to estate, shooting and stealing, raiding hunting lodges for supplies, and making merry with stolen whisky.

He was staring at her. The Queen stared back.

Victoria knew that face, she was sure of it. Those eyes, sunk deep into their sockets, intelligent yet imbued with humility, were not the eyes of a common vagabond. He wore thin mutton-chop whiskers and a curly little beard.

‘What is your name?’ she asked him.

‘I am John Ba–‘ he replied, but before he could finish Isaac slammed the butt of his rifle into the man’s stomach, and he doubled over in pain.

‘Do not lie to the Queen!’ the Jaeger shouted at him, then turned to Victoria. ‘He persists with the fiction that he is a gentleman. I am sorry that you should hear this.’

The poacher swore at his captor and looked up sullenly. Victoria turned away from the scene of violence.

‘Set this man free at the border of the estate,’ she commanded. ‘We are satisfied he has been taught a moral lesson and has suffered enough for his crimes.’

Isaac looked uneasy. ‘He is a poacher, your Majesty. He must be brought before the magistrate.’

Victoria had never altogether trusted Albert’s Jaegers. He had brought them over with him from Coburg before their marriage, and together with his German valets they were his most loyal servants. However, Victoria believed their loyalty extended only to the person of their master, and that they had no love for the British way of life–or for the mistress of the household in which they served.

‘I am your sovereign! Must I repeat myself, Isaac?’

He bowed once again and withdrew. As Victoria watched the hapless poacher driven before the barrel of Isaac’s gun, she reflected that although much had been done to civilise the Highlands in the century since Culloden, it remained a land of very different laws and customs to her own beloved England.

The poacher fired one last accusing glance back at the Queen, and once again she was disturbed by a fleeting sensation of familiarity. I am simply upset that Albert has not come back, she reassured herself. There is no reason why I should have seen that rascal before today.