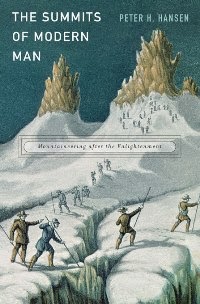 The Summits of Modern Man: Mountaineering After the Enlightenment
by Peter H. Hansen
I actually started reading this remarkable book some months ago. It’s a bit of a monster, so to make it more manageable I broke it down into chunks. This book is a marathon, not a sprint – and I mean that in the best possible way.”Summits” is concerned with the history of mountaineering. Until recently I thought this was a subject I knew well, but this book has quite simply transformed my understanding of the topic.

When compared with more accessible popular books on the history of mountaineering, “Summits” approaches things from an unusual angle. Rather than merely telling us what happened, it asks the vital question of “why?” This question is perhaps the one most neglected by scholars of mountain history, and although numerous excellent volumes have been produced over the last two centuries the question of “why?” is often given only the most cursory attention.

The key assertion of “Summits” is that mountaineering is a direct product of modernity and the Enlightenment. Other key themes are explored at length, including the quest for sovereignty (both collective and individual) which has often led men and women to the summits of mountains, but Hansen attributes the growth of mountaineering to modernity itself – and to the fundamental change in thinking that had to take place before mountaineering could take off.

It’s widely understood that mountaineering has passed through several distinct phases, from the early Enlightenment through to the Romantic era and the so-called Alpine Golden Age in which personal conquest, sporting achievement, and muscular Christianity eclipsed the earlier quest for truth. However, Hansen’s detailed analysis penetrates these ideas and goes far deeper. Like all history, the truth is more complex than the convenient labels we like to assign, and Hansen illustrates how wider context and sociopolitical factors influenced the development of mountaineering far more than I had previously believed. At the core of it all is the notion that the changing nature of human thought led to the rise of mountaineering and its development over the centuries.

Not a light read

“Summits” is a gold mine and it took me a long time to digest its treasures. The language is academic and frequently dry. This is not a book that I could stomach reading in a single sitting; I’d describe it as a committing read, something to be used to obtain valuable knowledge rather than for entertainment.

In my book spotlight when I first started reading this title I mentioned that it wasn’t ideal for the beginner or for the casual reader. I think there’s a good chance they would be overwhelmed by it. Other books give a far better general overview on the history of mountaineering, and are frequently written in a friendlier and more accessible way. I’d say that to make the most of this book, the reader should have a good basic knowledge of not only the history of mountaineering, but modern history in general (and, specifically, the concepts of Enlightenment, modernity, industrialisation, and Romanticism).

This is by no means a criticism of “Summits”: it’s an academic work, and it has nothing to be ashamed of. However, it requires concentration and background knowledge to appreciate fully. Instead of light reading in the evening I found myself most able to tackle this book when fully awake, at my desk, and with a computer to hand for taking notes.

Despite its slightly intimidating nature, this book is one of the most worthwhile I have ever read on the subject and I’m very glad I persevered with it. For me, the true gift of this book is in forcing me to look beyond the obvious when studying mountaineering history, and to consider the wider political, economic, and cultural context – and to really look inside the head of the mountaineer. Mountaineering didn’t evolve independently from these things and has always been very much a product of this time. “The Summits of Modern Man” has illustrated that fact for me in far greater depth than any other book on the subject I’ve read before.

“The Summits of Modern Man: Mountaineering after the Enlightenment” is published by Harvard University Press. You can buy a copy from Amazon here.