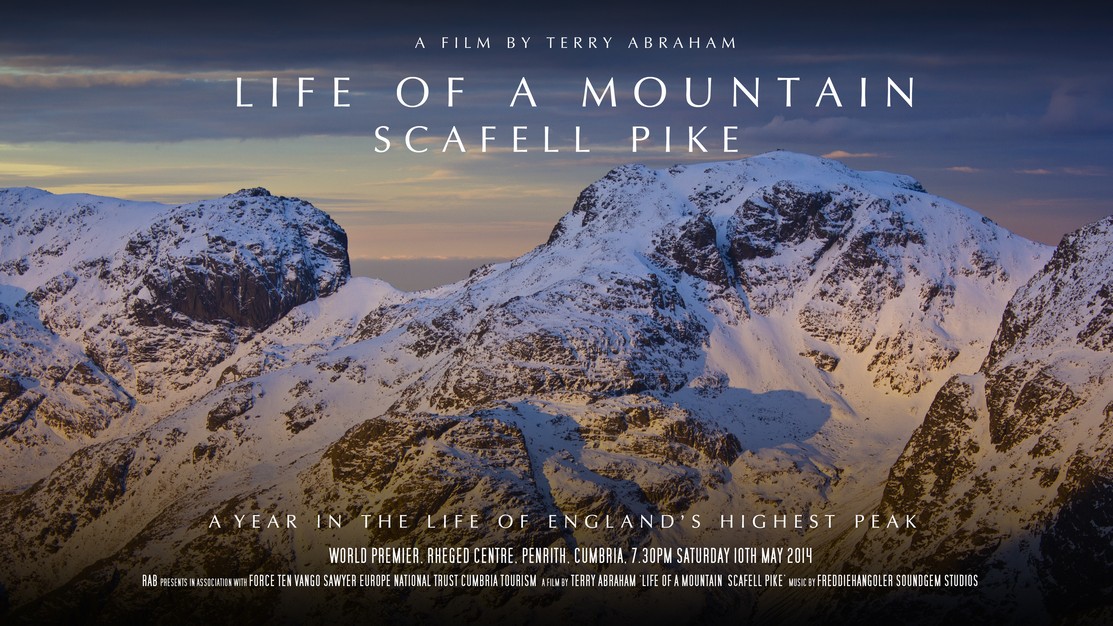 LIFE OF A MOUNTAIN — SCAFELL PIKE
A film by Terry Abraham

Terry Abraham’s mountain films have a certain signature style. Sweeping, panoramic shots of mountain grandeur are accompanied by stirring orchestral music. The pace tends to be slow, contemplative, almost lost in the wonder of the mountains. This formula worked incredibly well in his first film, The Cairngorms in Winter with Chris Townsend, but when I first heard that Terry was creating a longer film about the Lake District I wondered how his style would adapt.

The clue is in the title; or, to be specific, one word of the title: life.

This is a film about more than just one mountain, although Scafell Pike is certainly prominent throughout. It’s about the life of Wasdale and the Western Lakes, of the people who work the land and who come to climb the mountains; it’s about the inherent life and vivacity of the landscape itself, seen through the eyes of many characters. The theme of life underpins everything in this remarkable film.

The opening titles and cinematography are absolutely spectacular. These cut scenes, each lasting a minute or two and featuring dramatic shots of mountain scenery (frequently sunrises, sunsets, or timelapse shots of cloud spilling over the hills), act as interludes between the main sections of the film but they are in reality so much more. Terry has a unique skill in capturing the true beauty of the mountains and communicating it in a way that makes the viewer feel immersed in the landscape. It’s more than just technical skill or artistry, although both are present in abundance; it’s about the remarkable lengths he has gone to in order to get some of these shots. After all, he did most of this work alone and unaided.

Like Cairngorms, this film is clearly a labour of love and I am in awe of some of these slow, immersive scenes. I think the timelapse sections shot at night affected me the most, but there’s beauty in every section.

Amazing as the landscape interludes are, the meat of the film centres on the human beings (and animals!) who live, work and play around the mountain. A number of characters take the stage. The first is a shepherdess, speaking passionately about the heritage and traditions of the Cumbrian way of life, and this section did a good job of setting the scene for the rest of the film.

The start was slow paced, but it soon gathered momentum. After an ascent of the Piers Ghyll route, we see the summit of Scafell Pike itself about twenty minutes in and I loved the impromptu interviews with happy walkers on the top. Carey Davies from the British Mountaineering Council discussed the ethical consideration of the Three Peaks Challenge and I thought the role of the BMC in protecting the mountains, and our access to them, came across extremely well.

Conservation is an important theme. We see a day in the life of the volunteers who mend paths up the fells, fix drains, and dismantle unnecessary cairns. Nowhere else in England is the impact of humanity on the mountains felt as keenly as Scafell Pike, the highest peak of all, and I think the film does a good job of both explaining the impact itself and how conservation groups are helping to protect the landscape.

Other characters of note include Joss Naylor, the celebrated fell runner; Mark Gilligan, mountain photographer; Chris Townsend, backpacker and author; and Alan Hinkes, veteran Himalayan mountaineer. Hinkes brings the climbing heritage of Wasdale to life with energy and humour, and even backs off Broad Stand in slimy conditions!

There’s so much going on here and the film is really about far more than a single mountain. The pace is brisker than I expected and I learned a huge amount about Wasdale and Scafell Pike that I didn’t know before (and I have been visiting the area for years). The overall theme of life and vivacity inspires enthusiasm and fires up the senses.

It isn’t perfect, of course. The musical score, while very well judged in most places, is a little sentimental in others. Some of the monologues felt natural and unaffected, while others were more obviously scripted — not necessarily a bad thing, but it broke the sense of immersion a little. I also felt that the film could have been a little shorter without losing any of its substance. However, these are minor quibbles and the overall result is both polished and profound.

I think it’s important to remember that this creation was filmed and produced by a team of one. By any standards that’s a staggering achievement, doubly so when you consider the scale, charm, and energy of Life of a Mountain. Terry Abraham continues to go from strength to strength and I look forward to his future mountain films.

Life of a Mountain – Scafell Pike premieres on the 10th of May at the Rheged Centre, Cumbria. It is available to pre-order on Stridingedge.com right now and will be released on DVD in mid May. You can download it in HD from Steepedge.com from the 16th of May.