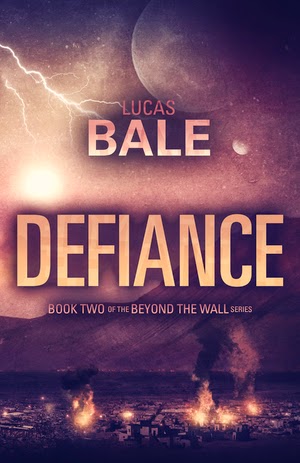 Earlier in the year I reviewed the debut novel of science fiction writer Lucas Bale. The Heretic plunged the reader into a frightening and chaotic universe. In my original review I wrote:

“The author paints an uncomfortable and frequently bleak vision of a future in which humanity has spread beyond the ruins of an Earth destroyed by climate change and conflict.”

Lucas Bale has been busy and has already made the second instalment in the series available for pre-order on Amazon. I was fortunate enough to be invited to read a pre-release version.

You can pre-order Defiance here: Amazon.com or Amazon UK.

The world of Beyond the Wall comes of age

While The Heretic was an excellent introduction to the fictional universe of Lucas Bale, Defiance goes deeper. The first volume felt like a prelude to a series of grand scope and in the second we see that series flower and unfold. The pervading sense of danger and chaos is communicated very well and the tone is unrelentingly dark, gritty, and realistic.

This is not an optimistic science fiction future in which all of our problems are solved — if anything, humanity faces more and bigger problems than at any other point in history, with a deeply stratified society causing misery and poverty for millions. There’s a notion that the elite have a conscious plan of allowing the worst of humanity to die out in the name of civilisation. Attempts to terraform planets are sometimes abandoned halfway through, leaving unstable climates and settlements exposed to the ravages of space. Interstellar travel is an arcane art and only vaguely understood.

This sense of realism and detail permeates every page, and the descriptive writing is really rather excellent. The overall result is majestic.

The story of Defiance is told from the viewpoints of three new characters. All are complex and driven by a potent cocktail of fears, hopes and neuroses. I found the story arc of Natasha particularly intriguing. A tunnel navigator, she is one of the misunderstood few who can use their senses to feel their way through hyperspace. It’s a novel take on interstallar travel and tunnel navigators are shunned by those around them. Weaver, another primary character, is a Caestor investigating a murder.

Both end up at the dilapidated colony of Jieshou — a forlorn but vividly depicted location. Events later move to an abandoned spaceship and this is the best section of the book, utterly chilling and almost unbearably tense.

Defiance is an excellent book. It’s classic science fiction, written with skill and panache. Good as it is, I think that Lucas Bale is only just getting into his stride, and that the best of this series is still to come.

I got in touch with the author to ask him about his work, and he has kindly provided these fascinating insights into his writing.

In The Heretic we catch a glimpse of the world you’re creating in Beyond the Wall, but in Defiance that world unfolds and we see a cruel universe of majestic scale. How do you approach your world-building?

I have always preferred ‘hard science-fiction’. My natural inspiration seems to derive from stories which appear to me to be theoretically possible – they are more compelling to me. Perhaps the simple fact I can relate it to something real makes it more chilling, more believable. The crux of hard science-fiction is the relationship between the accuracy, and amount, of the scientific detail in the story and the rest of the narrative. In 1993, Gary Westfahl suggested that one requirement for hard science-fiction is that a story “should try to be accurate, logical, credible and rigorous in its use of current scientific and technical knowledge about which technology, phenomena, scenarios and situations that are practically and/or theoretically possible.” So, I look to our own world and ask how things might develop if the events which I know have taken place, or are taking place, in the Beyond the Wall series had actually occurred.

When actually world-building, I use two intertwined approaches – macro and micro. When planning the setting for Beyond the Wall, I began with macro. I had an idea for a setting – a time and place, and themes and atmospheres, I wanted to explore. I created a chronology and history, which led to mapping, planet names, ideology, cultural influences, dramatis personae, technology, crime and law enforcement and so on – but these all came from that starting point. I brainstormed from that vision and asked questions – if a given event occurred, what would it lead to? If a character sought a particular outcome, how would they achieve it and what would they need to sacrifice in order to bring about that outcome? How would others react? What is humanity like in my setting? What is important to them, as compared to the issues the world faces now?

Curiously, that meant I moved quite swiftly to micro. I had characters growing in my head and began to ask questions about those characters and how they fit into the general theme of my setting. That process informed me about what the setting required in order to make it sing. Using that new information, I moved back to macro. Political ideology among the characters I was creating, and how that fit into the wider scheme of my setting. Desires and wants and needs – that staple of any character sketching process – has a macro application as much as it does a micro.

The setting for Beyond the Wall is a dystopia centuries into the future and on other worlds as yet unexplored by man in 2014 – but why is it a dystopia? What makes it a dystopia? What makes living in the setting so unpleasant? Why would any system of government allow a dystopia to exist, given the risks of revolution and the cost in maintaining, usually by force, such a system? How, historically, have equivalent political systems operated? What have been their successes and failures, and how have those manifested (and why)?

What does daily life consist of? How do people exist from day to day? Technology, currency, utilities, crime and punishment, transport, a working life — all are issues to be resolved before a setting has muscles over the skeleton. It might be referred to as the infrastructure of the setting. Then you need the flesh and skin – the fine details which make things ultra-real. The way the characters interact with the setting, the changes the setting experiences as the events the characters are players in unfold – all add texture and colour to your creation. Micro and Macro intertwine.

History teaches us about humanity and the way it evolves and history can be a tremendous source of inspiration. For many story reasons, Beyond the Wall mirrors certain elements of the Roman Empire. I have drawn a great deal of inspiration from that period, but so have the characters in Beyond the Wall itself. For reasons which the books will explain, a great deal of my setting draws on historical fact. Twisting it, shaping it differently and interpreting is all part of the challenge of creating an epic setting. But it has to feel ‘real’.

Your viewpoint characters are complex and dark, particularly the navigator Natasha. How did you choose these characters for the story you wanted to tell — or did they choose the story?

A mixture of both. Stories are more compelling if we believe the person telling us that story, and we will only believe them if they are real to us. That means they must be as complex as we are. I have a story I want to tell, but how I tell that story comes from the characters who tell it for me. What they learn (their character arcs) shapes the way in which my themes come across. Also, the story almost always changes as they grow as characters. Lots of authors talk about characters who tell the story for them and are surprised when events in their story change before their eyes because the characters take over. In an epic story, that’s very difficult to permit, but weak characters who act irrationally cannot exist in a good story, so I am forced to listen to them as my story unfolds. Usually, what I thought was a good story arc is far better when the characters tell me where I should be going.

Jordi began life as an intriguing point of view to tell an epic story through, a naive fourteen-year-old from a rural backwater, but who he was going to become was largely a function of me living the story as it unfolded. Natasha came to me as I was walking in Pimlico and saw someone who looked vaguely similar to the way she looks in Defiance; I thought “she’d be fantastic on Jieshou.” With Weaver, I wanted an old, jaded cop, but someone who had voices in the back of his head which inferred a level of entrenched thinking – almost brainwashing – through years of having carte blanche to wield power with impunity. I asked myself, “how would such a man react to given situations?” and also, I wanted him to change his perceptions and attitudes as the story progressed, hence his disillusionment with the Magistratus. Also, I don’t want superhero characters. I want flawed, human characters who have to struggle internally and externally. An epic story is far more compelling if we can identify with the characters as they learn and change. Also, the main theme of Beyond the Wall – what is humanity and what are we permitted to do to protect it – can only come through via “ordinary” people. Of course, in a thrilling space opera, I need to have some reasonably powerful people fighting in these conflicts, but they don’t need to be super-soldiers. Internal conflicts are just as powerful as external ones.

Do you believe that humanity can break free from the shackles of Earth and head for the stars?

I think it’s inevitable. Too many scientific discoveries are being made, or close to being made, currently (LHC, Warp Travel and the Alcubierre Drive, Hypersonic and Scramjet propulsion, and so on); too much enthusiasm exists for space and what lies out there. We are naturally an exploratory species – our history shows us that – I think we’ll eventually realise that we are actually all the same, just a little different in our outlooks and skin colour. The vastness of space may well one day make our international conflicts seem rather petty. Alternatively, we might be forced into heading for the stars if we don’t do something about the problems our own planet faces. It’s a bit of a speculative fiction trope now, but it may well have some basis in reality for our future.

You can pre-order Defiance here: Amazon.com or Amazon UK.

Postscript: What it Means to Survive

“McArthur’s World is a frozen planet which has been bled dry by mineral mining corporations for three decades. When there is nothing left but ice and snow, the last freighter lifts off carrying away every remaining human being. When it crashes in a wilderness no one has ever returned from, there are only two survivors: a miner who wants to get back to the children he has not seen for two years, and the woman who forced him to come to McArthur’s World in the first place.


“They think they’re alone, until the shrieks in the darkness come.”