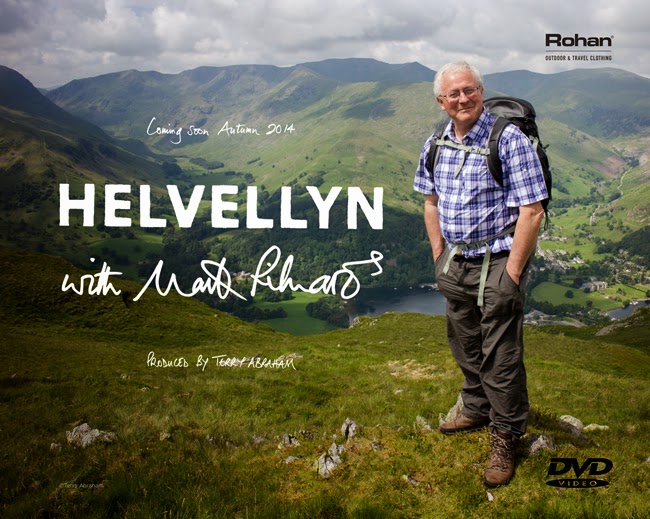 HELVELLYN WITH MARK RICHARDS
A film by Terry Abraham
Watch the trailer here
Terry Abraham has made his name by creating beautiful mountain films, usually doing all the hard work himself — and that means both the filming and the production. His Cairngorms in Winter with Chris Townsend was a visual feast with long, dramatic cut scenes that immersed the viewer in the spectacle of the winter mountains. I’m glad to say that Helvellyn with Mark Richards is a worthy addition to Terry’s repertoire of mountain films, although it is a little different to his two previous titles.
The star of the piece is Lakeland guidebook writer Mark Richards, author of the Lakeland Fellranger series. Mark was a friend of the late Alfred Wainwright, and knows the fells perhaps as intimately as Wainwright did himself. The goal of this short film is simple: to introduce the viewer to the beautiful mountain of Helvellyn, showcasing three very different routes to the summit and talking a little about the human and natural history of the fells along the way. Mark states that he wants to “inspire the viewer to be more appreciative and inventive” in their hillwalking, and in that respect I think the film certainly makes the mark.
The musical scores for Terry’s films are particularly distinctive. I’d say the soundtrack for “Helvellyn” is a little more modern, more upbeat, and perhaps a little less sentimental than the scores for his previous two films. It fits the subject matter perfectly and helps to reinforce the idea that this film is a little less heavyweight than his previous titles.
The first route is the east ridge of Nethermost Pike, named “Hard Edge”. It’s a misty ascent in early autumn and is, I’d say, fairly typical weather for a day out in the Lakeland hills. Mark’s commentary on the various features of the route is casual and almost chatty, yet his enthusiasm is palpable — a long way from the dour attitude of Wainwright himself. There are many fascinating details on the etymology of the place names in the surrounding district, many of which stem from Viking words (although Helvellyn itself is more ancient, based on the Welsh language).
Mark Richards illustrates his books with line drawings and I loved how a drawing of a view, occupying the entire screen, would slowly morph into a photograph of the landscape. This was a very visual way of demonstrating how Mark’s line drawings aim to interpret the landscape rather than depict it precisely, and I think these scenes add a lot to the film.
The cinematography is up to Terry’s usual standards but the mixture of very ordinary weather in the various ascents makes it all a little less grandiose (but no less beautiful). In my opinion this is a good thing. The previous two films were of grander scale and ambition; this is a slightly more humble piece, and as such the cinematography is appropriate. The sweeping cut scenes were as excellent as I thought they would be and the addition of some spectacular drone footage over Striding Edge added an extra dimension.
The second route to be shown was the Brownrigg Well route. In this section Mark was joined by John Manning, editor of Lakeland Magazine. It must be said, some of their banter in the first part seemed a little forced and painful — but things soon settled down and the easygoing, conversational nature of this chapter worked very well in the end. The chief subject of conversation was the geology of the district, but there were also sections about the infamous aeroplane landing on the summit of Helvellyn in 1926 and the various memorials to people who have died on Striding Edge.
I like the way Striding Edge was alluded to — and viewpoints of it teased — before the subject of the famous ridge was directly tackled. Striding Edge is the star of the film’s final chapter and, in my opinion, the best part. The views of the ridge are spectacular and a mixture of standard shots, drone footage, and close-up handheld camera work tell the story of the ascent very well. There is also a very interesting interview with personnel from Fix the Fells who are helping to stabilise paths in the area. Mountain conservation is an important theme in Terry’s films so it was good to see this aspect addressed so well.
Overall, Helvellyn with Mark Richards is a splendid mountain film. It treads a confident line between the grand and impressive works Terry has produced in the past and the more standard genre of Lakeland hillwalking film we have seen become popular in recent years. Newcomers to the fells will find themselves energised by Mark’s enthusiasm, and old hands may learn a thing or two as well — not to mention be enchanted by the beautiful views. Highly recommended.
Buy the film on DVD from Striding Edge here
Further reading
The Cairngorms in Winter with Chris Townsend — film review
Life of a Mountain: Scafell Pike — film review
An interview with Terry Abraham, mountain film-maker