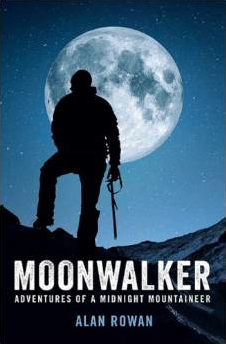 Moonwalker: Adventures of a midnight mountaineer
by Alan Rowan
Walking the Munros. This is a time-honoured subject for hillwalking books, and it might be thought that nothing new can be contributed to the topic. Search for books on the Munros and you’ll find everything from detailed guides to memoirs. However, Alan Rowan’s book Moonwalker: Adventures of a midnight mountaineer is something altogether different, and not only for the most obvious reason.
The premise of this book is clear from the outset: it’s about climbing the Scottish hills by night. I was prepared for an unusual take on what it’s like to climb mountains after dark, maybe with some poetic descriptions of the many sunrises the author must have seen.
What I wasn’t prepared for was such a continuously enjoyable narrative, told with a compelling blend of candour and razor-sharp wit. This is actually the account of an epic undertaking and I take my hat off to the persistence, toughness, and hill skills of Alan Rowan. There’s a wealth of mountain experience contained in these pages.
The author’s journey to climb the Munros largely took place in the 1990s, at a time when his hectic day job prevented regular weekends on the hills. He was not an experienced mountaineer when he began his journey, and the early chapters are filled with entertaining anecdotes about poor gear and misjudging the conditions. When he caught the bug, as so many of us do, he made it fit around his work commitments by heading out after a shift and climbing at night — often heading straight back into work immediately afterwards. At first this was just a stop-gap attempt to fit his hillwalking ambitions in with his work schedule, but he soon began to enjoy the finer points of being on the hill after dark.
In my opinion, two particular qualities make this book special. First there’s the journey: an incredible voyage of self-discovery and perseverance, featuring low points as well as highlights. Then there’s the quality of the writing itself. The author’s voice is very distinctive, with a sharp wit and a handsome turn of phrase. Many of the situations Alan Rowan got himself into on his journey are genuinely hilarious, too. Parts of the book had me laughing out loud.
In summary, Moonwalker deserves every word of the praise I’ve been hearing about it, and I wholeheartedly recommend it to all lovers of the Scottish hills.
Further reading
Buy the book on Amazon UK
Read Alan Rowan’s blog
BooksNoteshillwalkingreviewScotland